Martha Stewart Living Omnimedia on Tuesday reported that advertising revenue in publishing was up 6 percent. 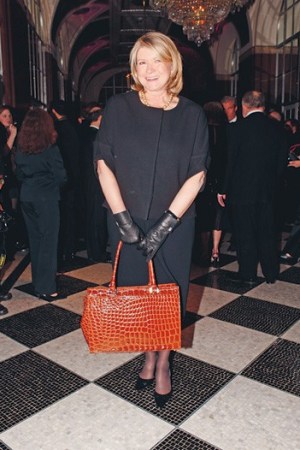 MARTHA’S SURPRISE: Martha Stewart Living Omnimedia on Tuesday reported that advertising revenue in publishing was up 6 percent (excluding Blueprint) in the second quarter versus last year, but guidance for the third quarter isn’t as rosy. Wenda Harris Millard, president of media and co-chief executive officer, said during the company’s quarterly earnings call that publishing revenue is expected to be down in the midteens during the third quarter, compared with the same period 12 months ago. Overall revenue for the publishing segment was down 2.5 percent in the second quarter, to $46.3 million, because of an increase at Martha Stewart Living offset by the loss of Blueprint. The division also includes its book operations. Categories that helped increase ad growth at the company during the second quarter included apparel and financial services, which is surprising, given that those are two sectors being squeezed at other titles.

This story first appeared in the July 30, 2008 issue of WWD. Subscribe Today.

Newly appointed executive chairman Charles Koppelman said the company just started rolling out magazines overseas, beginning with international editions of Martha Stewart Living and Everyday Food, but he declined to provide more details. Living had a drop in ad pages, although ad revenues were up 8 percent, and circulation was down about 10 percent. Internet revenues were $3.2 million for the quarter, compared with $2.5 million during the same period last year. Total group revenues for the quarter rose 5 percent to $77.1 million. Net income was $328,000 compared with a net loss of $6.7 million last year. — Amy Wicks

COULDN’T HE JUST MAIL IT?: Relatedly, the heroine of “Emma’s Table,” a novel by New York Times etiquette columnist Philip Galanes to be published this week, is a sixtysomething who “parlayed a small career as an interior decorator into an enormous one as a media darling….Her allure had always been easy to see: she was just like you, only better — which was somewhat at odds with the latest feather in her cap, a conviction for tax evasion and lying under oath, complete with a stay in the federal pen.”

Don’t worry, it’s not line-for-line Martha — Emma is described as “a regal brunette.”

The novel is not to be confused with the crop of “assistant lit” of recent years: Galanes doesn’t know Stewart, hasn’t worked for her and didn’t do any research on her. He did, however, have an epiphany watching Stewart on TV at the height of the legal troubles that led to her serving five months in prison. Galanes’ first novel had just been published, and it felt anticlimatic. “I was having a loser-to-loser identification with her,” Galanes told WWD. “She mentioned Nelson Mandela. I thought, has she just compared her shifty stock deal to Nelson Mandela? That’s exactly right. We have to do whatever we have to do when we get the huge hit in the stomach or the bash in the head.”

Inspired by “a character who was so high and so low,” Galanes (also an entertainment lawyer who dabbles in interior design) started writing. These days, he said, “we’re desperate to get the book into her hands. All I want to do is take her out to lunch to see the book. I would just want to thank her, because I think she helped me work through one of my own issues by imagining an interior life for her that is entirely a fabrication.” The dream site would be The Four Seasons — “Probably the one time I could get a good table” — but Galanes may not want to hold his breath for Stewart’s company. A spokeswoman for her declined comment. — Irin Carmon

ROCKING ON: You know fashion week is just around the corner when Condé Nast’s annual Fashion Rocks supplement begins to arrive in mailboxes. This year marks the fifth anniversary of the Condé Nast Media Group program that includes the annual magazine, concert and television special. The magazine, helmed by editorial director Anna Wintour and editor in chief Jonathan Van Meter, today begins its rollout with subscriber copies of Vogue, Vanity Fair, The New Yorker, Glamour, Details and 11 other Condé Nast titles. Justin Timberlake is this year’s cover model. The pop star, actor and fashion designer wore a tuxedo jacket from his own line, William Rast, in the photo by Craig McDean. Other musicians profiled and photographed in the issue include Beyoncé Knowles, shot by Jean-Baptiste Mondino; Mariah Carey and Dhani Harrison by Steven Meisel; Usher and the Black Eyed Peas by Norman Jean Roy; Steve Coogan by Anton Corbijn; Mark Ronson by Terry Richardson, and London rock band The Kills by Annie Leibovitz. Martin Schoeller snapped Keith Urban and Zooey Deschanel, and André 3000 discusses his new clothing line, Benjamin Bixby, in a four-page spread shot by David Vasiljevic. While Citi, Cover Girl, Chevrolet, Nivea, Kohl’s and Verizon all packed multiple pages of advertising in the issue, Richard Beckman, president of Condé Nast Media Group, said ad pages were flat with last year’s edition. The 170-page magazine is a precursor to the Fashion Rocks concert Sept. 5 at Radio City Music Hall, which airs on CBS four days later. — Stephanie D. Smith

MAD FOR THE SHOW: Break out those girdles and high heels — that fashion trendsetting show “Mad Men” appears to be a bigger hit so far in its second season. Approximately $8 million was spent this summer promoting the show’s second season, an investment that led to a record number of viewers for its season two premiere on Sunday. The Emmy-nominated drama raked in an average of 2.1 million total viewers, according to Nielsen Media Research, which is more than double the 915,000 viewers the show averaged during its first season. “Mad Men” had only one sponsor on Sunday, BMW, and the automaker is also the sole sponsor of its Web site, although Target is also an advertiser on the program.

On the fashion front, AMC worked with Bloomingdale’s in June to present the iconic fashions from the show in store windows, in advance of the premiere. The marketing hype is undoubtedly helping along sales of the perfectly timed release of the first-season DVD, which is a number-four bestseller on Amazon.com and number three on the Barnes & Noble Web site. And the buzz is spilling into the pages of countless magazines, including the cover of Entertainment Weekly and Best Life, which has lead actor Jon Hamm on its September cover wearing Black Fleece by Brooks Brothers. — A.W.