What to Watch: So, Media Brands Have New Owners — Now What?

More than a dozen media brands have been sold between since last fall, like Brides, Deadspin and Time. What changes are on the way?

More than a dozen media brands have been acquired since fall.

A lot of media brands have new owners, and with them will inevitably come changes since everyone has their own plans to revive and make profitable their investments.

Meredith Corp., having acquired and dissolved Time Inc., shook off magazines Sports Illustrated, Fortune and Time, which didn’t fit in with its other more prosaic, and more profitable, titles. Condé Nast, still looking to cut costs and make big, if belated, moves into digital and video, sold magazines W, Golf Digest and Brides. Univision came to terms with the fact that its acquisition of former Gawker digital brands like Deadspin and Jezebel, and separately The Onion, was a mistake, given its decades as a Spanish-language TV broadcaster. Even Verizon Media started to winnow its digital web portfolio, which it expanded in 2017 through the acquisition of Yahoo, effectively throwing its hands up with Tumblr and letting it go reportedly for around $2 million, when in 2013 it was valued at $1 billion.

But what is to become of these brands, some respected and with history, others merely popular online, as they settle into new ownership? 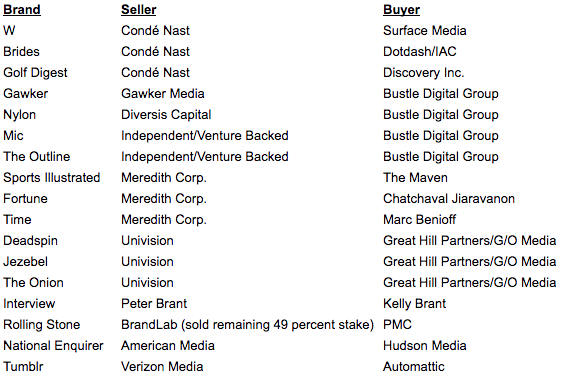 A list of media brands sold off and bought since last fall.

Brides is one magazine that’s said goodbye to print after 85 years. New owner Dotdash, a subsidiary of Barry Diller’s IAC, admitted from the outset that it intended to focus on Instagram and the web site. “There’s a huge opportunity in the space to really upgrade the kind of content that is on the Internet around brides and weddings,” Dotdash chief executive officer Neil Vogel said of the May acquisition. Since then, the Brides site has been streamlined and followers on Instagram have grown steadily, according to social media tracker Social Blade.

On the flipside, Golf Digest, bought by Discovery Inc., is set to continue in monthly print and expand even further to more global markets, including TV. But W magazine is likely in for some change, having been sold surprisingly to Surface Media and losing its longtime editor in chief and de facto publisher Stefano Tonchi. As many advertisers and high-profile contributors stayed with W largely due to relationships with Tonchi, insiders are expecting changes on both fronts.

Some significant shifts also are expected at Sports Illustrated, the one-time pinnacle of sports journalism that was acquired by Meredith, then sold to apparel-focused Authentic Brands Group only to be effectively handed off to little-known media operator The Maven. The magazine, which went from weekly to bi-monthly last year, also has a new ceo in Ross Levinsohn, for a time ceo and publisher of the Los Angeles Times when it was still owned by Tronc/Tribune Publishing. His tenure there was marked by his removal from the newspaper after a 2018 story in NPR revealed former employees’ accusations of “frat boy” antics and earlier accusations of sexual harassment in the workplace. Going through so much change in leadership, morale inside Sports Illustrated is said to be low. Although the title is far and away now The Maven’s best-known brand, insiders are wary of changes in structure and operations under Levinsohn, as The Maven mainly works in the digital ad space and platform distribution, with no previous link to journalistic efforts.

But it’s not just decades-old magazines that face an uncertain future. Former Gawker brands sold by Univision to private equity firm Great Hill Partners, including Deadspin and Jezebel (known more for snarky hot takes and opinion-driven items on sports and women’s issues, respectively) as well as satirical site The Onion are not having an easy integration with new executive leadership under Jim Spanfeller, formerly of Forbes. Industry sources have it that the goal of the new ownership is to get all of the sites steadily profitable again through more advertising (including branded work), in order to flip the sites as a group, yet again.

But staff seems to be staging something of a revolt. Deadspin published an explainer on how the company is being run now, accusing Spanfeller of bringing in an incompetent executive team and “repeated and egregious interference with editorial procedures.” The site’s editor left for a position with Wired’s web site about two weeks after its publication and wrote a lengthy goodbye letter, saying Spanfeller admitted to only buying the sites with Great Hill because they were cheap and the traffic was good. Industry chatter has it that almost everyone on staff is looking elsewhere, leaving in question the future of Deadspin and the other sites going forward.

It’s possible that the former Gawker sites are beyond revival at this point, having lived their best days before the company went into bankruptcy following the Hulk Hogan libel case. Even Bustle Digital Group, which bought the main Gawker web site and its archive out of bankruptcy late last year, intending to bring it back to its former state of snarky must read, hasn’t been able to make it work. BDG hired former Condé editor Dan Peres to lead Gawker 2.0, but within a few months he and the entire, albeit small, staff was let go. The relaunch is now on permanent hiatus and talk is starting of the site possibly going up for sale again. BDG is also in the process of relaunching a number of other sites it’s bought recently, including Mic and The Outline, as well as Nylon, which it is set to start putting in print again next year. BDG owner Bryan Goldberg explains his strategy as “boutique” model, with a number of smaller brands under the BDG umbrella that share things like tech and sales support.

There are acquisitions doing well. One of the surprising standouts has been Time magazine, which was bought last fall by Salesforce billionaire Marc Benioff and his wife Lynn, a deal finalized in April. The magazine has continued to produce weekly print, its covers still talked about by pundits. Benioff has invested, letting editor in chief and ceo of the magazine Edward Felsenthal start promoting and hiring new staff, even handing out cash bonuses. The goal is to grow the brand and expand its coverage. Insiders say morale is high, especially since many Time staffers witnessed years of deep cuts at Time Inc. and went through being sold twice in the span of a year, making Benioff the magazine’s third owner. The third time could be the charm.