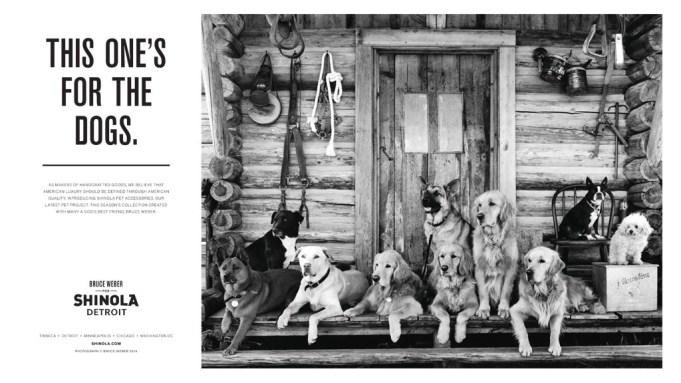 Bruce Weber’s love of animals is no secret. The photographer’s portfolio is comprised just as fully of pictures of his pets as it is with snaps of supermodels; in 2004, Weber released “A Letter to True,” a documentary dedicated to his beloved golden retriever.

Weber’s latest canine-focused project has him stepping into a new role: designer. For fall, the photographer is collaborating with Shinola on a line of accessories for pets. The collection, which includes leashes, collars, beds and toys, as well as postcards and notebooks featuring Weber’s pictures, will be available online and in Shinola stores beginning in September.

Here, Weber talks about the collaboration, working with dog models and the future of photography.

WWD: How did you first meet the Shinola team?

Bruce Weber: I went to meet Tom [Kartsotis, the founder of Shinola], and I just liked him. I liked his philosophy about what he wanted to do to bring back business by using American-made products. It reminded me of my dad, who ran a business in a really small town in western Pennsylvania. It connected me to home.

WWD: Who initiated that first introduction to Tom?

B.W.: The Olsen twins brought us together, and then Tom asked if I wanted to come to Detroit and do some pictures for Shinola. That’s how it sort of happened. There wasn’t an amazing moment where we bumped into each other at an art gallery. We just met and got along.

WWD: How did you decide to work together in a design capacity?

B.W.: I’ve always liked doing a lot of different things. I’ve made films and I take photographs. I’ve always wanted to be a DJ at a late-night radio station, but I thought, “If that’s not going to happen, I’d like to make something for dogs.” I really love all kinds of animals. That’s how it sparked my interest. We were sitting around one day, and it kind of came up. I don’t think I’d be able to do this if I didn’t have the encouragement and really strong sense of the people who work at Shinola. Tom has really wonderful people who have really good taste and are really creative and good about getting things done.

B.W.: All good designs come from something personal. We were always bringing in ideas from real life. We talked about a film or a book about dogs that we loved. So many people at Shinola have several dogs. It’s kind of like a dog playground.

WWD: What was it like to shoot your dogs for the campaign?

B.W.: I hadn’t been shooting them as much as I usually do, so this was a good reason to. Like all models, they have good days and bad days. Certain ones are temperamental, and other ones are very easy-going. They get really depressed when shooting is over. Dogs are so unique. I have that American Indian philosophy about animals, because they have such a great connection to their animals. It’s almost spiritual.

WWD: Do you have any additional projects you hope to do in the future?

B.W.: I’m working on finishing a film that I did on Robert Mitchum. We’re coming close to the finish on that. And then I have my annual journal coming out in November, so we’ve been working on that.

WWD: With so many side projects, does fashion photography still creatively fulfill you?

B.W.: When I first started, I was lucky because I got to work with some amazing people like Grace Coddington, Franca Sozzani, Kezia Keeble and Paul Cavaco. It was like going to school and it made me feel like I never wanted to get out of school. You know how you meet people that are just always in school? I feel like that person. Working on this project with Shinola was a new education for me. I have such respect for people that make things homemade or on a large scale.

WWD: How has the industry changed since when you started?

B.W.: I still shoot film, while a lot of people shoot digital. I have no problem with it, but a lot of people have to take pictures today with a lot of cooks in the kitchen. I was always used to working with a fashion editor and the editor of a magazine and the art director — not with hair, makeup, tech and about 10 other people. I really discourage that and don’t allow it.

WWD: Are there any new photographers today that you admire?

B.W.: It’s really hard for any of us to see a new bright light on the future because they aren’t given the chance, or they are asked to take pictures like people who have been around for years are taking them. I really like my nephew’s son who is about 10 years old and is taking really beautiful pictures. They are kind of exquisite, and I’m not saying that because he’s my relative. There is an innocence to them. Do you have to take photographs when you are a kid? If that’s the case, then maybe we should all stay really young.