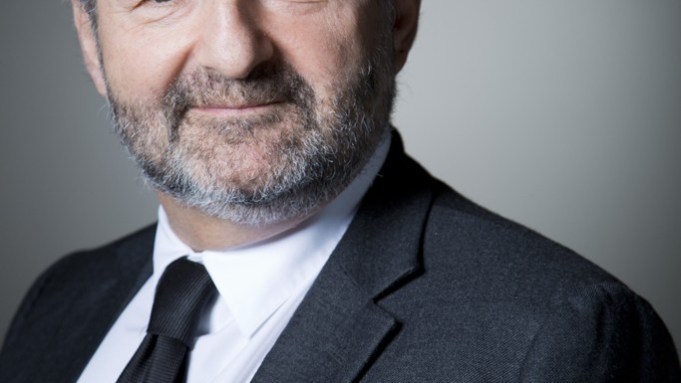 His previous positions include general manager of books retailer Fnac, then owned by PPR (now known as Kering), and publication director at the French newsweekly Nouvel Observateur. He is no stranger to the fashion world: He lives with Inès de la Fressange.

Olivennes recently appointed Françoise-Marie Santucci editorial director of Elle. Santucci joins Elle from Libération’s Next magazine and succeeds Valérie Toranian, who was at the position for 13 years. “Santucci will, with the editorial team, make an Elle [that is] even closer to its readers — livelier, deeper, more joyful, more at the forefront, bolder, warmer, more caring,” according to Lagardère.

The 45-year-old, discreet and respected Santucci, who often sports a biker jacket, black pants and low boots, will also have to straighten out circulation. In 2013, paid circulation of Elle in France was 369,965, down from 383,905 in 2012, according to France’s Audit Bureau, and it has continued to drop in the first half of 2014.

The change in editorial leadership comes amid a major restructuring at the French media group. Earlier this year, Lagardère sold 10 publications, including French women’s magazine Be and Psychologies magazine. The magazine business that used to be the lion’s share of Lagardère Active’s concerns now represents a little more than 40 percent of revenues and continues to decrease. Its other business segments include radio, TV production and digital.

Here, Olivennes talks with WWD about the “shock therapy” he applies to his group, the specifics of the French magazine market and how the French president’s personal life is a boon for the business.

Denis Olivennes: It has clearly helped us, especially Paris Match magazine and Journal du Dimanche, when you add the rich news since the beginning of the year to our scoops. Being the first to run pages of Valérie Trierweiler’s book was a fantastic coup. We usually distribute 250,000 copies to newsstands, in addition to the 400,000 copies for subscribers. This time, we made 400,000 copies available for newsstands. Newsstand owners told us they sold out.

In general [turmoil in the French president’s personal life] has helped women’s magazines, but to a lesser extent than people magazines. We have been addressing it in Elle with a journalistic angle and dignity. We have people magazines, as well: Public, France Dimanche and Ici Paris. People magazines used to be a very profitable segment; that is less the case for the ones targeting a younger audience, as readers are obviously shifting to the Internet.

WWD: How do you see the magazine landscape changing?

D.O.: I have both certainties and questions. There will always be more news consumption: more and more readers and a growing demand for news. Our business has a future. My question is, how will they consume? Sites, apps, smartphones — will they coexist for five, 10, 15 years? Down the road, will print be gone, and by when? There is a big question mark there. I am optimistic over the long-term and battling over the short-term.

WWD: You said the press needs “shock therapy.” What does that mean?

D.O.: With respect to our group, it means focusing on titles that, thanks to their size and potential, will survive in the Darwinian situation that the press is in. We sold smaller titles because they have better chances of surviving in smaller structures. That part is behind us. We are focusing on our flagship titles, such as Elle, Paris Match.

WWD: There are persistent rumors that Elle France will be sold.

D.O.: Elle is one of the best assets that we have. It would be insane to sell it.

WWD: What are the next steps of your “therapy”?

D.O.: Now we need to get lighter. We need to run magazines at lower production costs, lower costs in general. We must be more flexible. We need to go back to the spirit of the origins, to return to a start-up mind-set. I am struck to see how most newspapers are weighed down. We have to get out of our comfort zone, spot new talents and make them emerge, bring up a new generation. We must be able to offer novelty — either in the content or in the platform — both to our consumers and advertisers.

WWD: How much does your investment in digital represent?

WWD: Where do these savings go?

D.O.: They go to rebuild the accounts of our titles and also to our digital investments. But it is inaccurate to say “digital investments.” We are going toward 360-degree titles. In the near future, it would be nonsense to have reporters writing for the paper and not for the Web and vice versa.

WWD: What’s the reporting structure of the digital and print teams now?

D.O.: For now, we have two teams, the editorial team of the print issue and of elle.fr. Both are under the direction of Elle’s editorial director. The same holds true for our other titles. It is a transitory phase.

WWD: What’s the timeline for a fusion between the two teams?

D.O.: We will start in the next few months with Paris Match, followed by Elle.

WWD: You have reorganized the magazine’s holdings into four “brand universes”: high-end women’s, mainstream, news and family. Why?

D.O.: We went from a vertical to an integrated organization. There is a head of the luxury women’s universe [Constance Benqué] who helms the editorial, digital, advertising, sales and publication divisions. We cannot develop with a silo organization.

WWD: Any concerns that this could jeopardize the core values of journalism and independence vis-à-vis advertising?

D.O.: The editorial director remains independent. Editorial isn’t subordinated to advertising. They are just side by side now.

WWD: For fashion magazines, print advertising is still where a lot of the money is made. Are you seeing advertising revenue in that space start to shift to digital?

D.O.: We are very far from it. Print still makes up 95 percent of our advertising revenue. That holds true for Elle. We can improve monetization of our digital audience. Elle.fr counts more than two million unique visitors. We can boost the Web site’s audience and impact. We can collaborate with advertisers to develop tailor-made offers (beyond classic banners), native advertising and smart brand content.

D.O.: We need to hunt talents and nurture them. I am convinced editorial jobs are linked to a mind-set. If you are on a team that is willing to reinvent the world, you make a good paper. Journalists are creative people. They must be in a positive dynamic to go get the unexpected profile. A paper cannot be humdrum.

WWD: How has the editor’s job evolved?

D.O.: A journalist is multiple source, multiple media. Timing is faster. Everybody has the same news, so it’s even more important to get the news nobody has, with sharper angles and a more polished style. I think, in general, the job is more demanding. Meanwhile, the economic environment is tougher, as papers are less wealthy.

WWD: Which newspaper do you read?

D.O.: Everything. Over the summer, on the Gaza conflict, I read everything ranging from L’Orient-Le Jour, the Lebanese newspaper, to the English version of Haaretz. I enjoy reading the science section of The New York Times, The Economist, The New Yorker, et cetera.

D.O.: I have just read “Le Royaume,” by Emmanuel Carrère, which came out this fall in France. It is an autobiographic narration on the author’s mystical crisis, unexpectedly mixed with a biography of Saint Paul. It’s an unidentified literary object.

WWD: Are you in a mystical phase right now?

D.O.: These are topics of interest to me.

WWD: What are the characteristics of the French magazine landscape?

D.O.: We have a paradoxical situation. We have major advertisers such as L’Oréal, LVMH Moët Hennessy Louis Vuitton and Kering at home. But, at the same time, we have a lot of magazines for a small market. Also, the portion of newsstand sales versus subscriptions is more important than in the Anglo-Saxon countries. And postal costs in France are the highest in Europe. In the U.S., the bigger part of the revenue comes from advertising; here, 40 percent of the revenue still comes from magazine distribution. So, it is a unique equation in France.

Also, we have been lagging behind in the digital revolution, but this means there’s room for improvement. We can lower postal costs; I believe there will be fewer titles, and we can develop in digital, so we still have a few tricks up our sleeve.