Denisot shares his thoughts on the coverage of the terror acts in Paris, being inspired by Dorothy Parker, and why he declined to model for The Kooples. 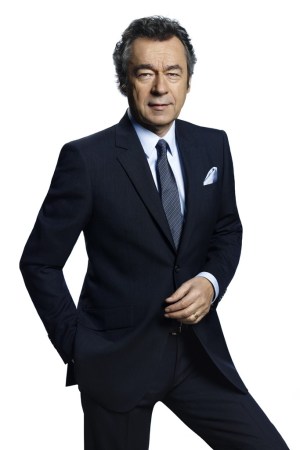 The Zoe Report Continues to Deliver for Bustle Digital Group

Monthly circulation of Vanity Fair was on average 123,650 between July 2013 and June 2014, outpacing the initial target of 80,000. This comes against a broader backdrop of declining circulation, with the women’s magazine segment down 3.8 percent in France during that time period.

“We aren’t in survival mode; we are in an expansion mode,” Denisot said.

Vanity Fair France is positioning itself as a magazine built on investigative journalism — infused with glamour — grabbing a part of the luxury advertising dollars of women’s magazines.

The 59-year-old former film critic, TV executive, artistic director of the Cannes Film Festival ceremonies and director of soccer teams, Denisot released a book this fall titled “Brèves de Vie” (“Life in Brief,” in English) where he shares stories, including the time Sharon Stone asked him and Michael Douglas — while promoting the 1992 film “Basic Instinct” — if they thought she had a big ass.

Denisot shares with WWD his thoughts on the coverage of the recent terror acts in Paris, how he got inspired by Dorothy Parker to create a section in the French Vanity Fair, and why he declined to model for French contemporary fashion label The Kooples.

WWD: How does a glossy magazine like Vanity Fair cover the terrorist acts in Paris?
Michel Denisot: The February issue [that hit newsstands on Jan. 21] was already closed before the tragic events, therefore there is only a [Je suis Charlie] sticker on the cover. Our next issue will be covering them and the rally extensively, with posthumous contributions of Georges Wolinski [one of the cartoonists killed in the attack on Charlie Hebdo satirical magazine]. He collaborated for six years on a show I had on Canal Plus. He was reacting to the interviews live in his way, with drawings. So I pulled out cartoons of that time as well as others that his spouse and daughter had. They will open the issue. My editor’s letter will be dedicated to him. Sure, it is a challenge to be a monthly when news is so blistering and deadly, but our team is savvy. We won’t change the DNA of the magazine. We will bring new lights to our readers, either by unanimous compassion or by going deeper in the investigation.

WWD: You were recruited for the top position at Vanity Fair France. You said it was a first in your entire career?
M.D.: Yes, I have always pitched, whether it was for jobs, stories, TV concepts. I knocked at the door of the local newspaper of my hometown, Châteauroux, [France], to get an internship. Then, I moved to Limoges to look for a job. I worked for a regional radio station. Then moved to Paris. I often accumulated jobs because I was afraid of not having enough work. So I have always had a job. I was at a dinner at friends’ with Xavier Romatet [president of Condé Nast France]. He came to me and asked me if I wanted to be editorial director of Vanity Fair. I was thrilled because Vanity Fair is a very prestigious magazine with a proud heritage.

WWD: When you launched in June 2013, it was reported that 80 percent of the editorial content would be produced locally, exclusively for the French version and 20 [percent] would consist of content picked up from the U.S. version. Is that still the case?
M.D.: Now the breakdown is more 90-10. [90 percent French content versus 10 percent of American content]. The more the magazine is established, the more external contributors are pitching stories. For instance, Hervé Gattegno [who heads investigation at VF] has a vast network [of stringers] in this area.

WWD: What have been your most successful issues so far?
M.D.: Hillary Clinton in August was one of our biggest successes. I think Vanity Fair readers like destiny, success stories and, especially, turnaround stories; they want stories that have heft. The first issue featuring Scarlett Johansson did very well. But the first issue is special; it was a launch issue, with a reduced price [at 2 euros instead of 3.95 euros] and with a big ad campaign. The Charlotte Gainsbourg issue performed well. The cover was great. With my new job, I have discovered the power of the cover, how much impact it can have.

WWD: What are the covers you are most proud of?
M.D.: The one featuring Michael Douglas [shot by Patrick Demarchelier in September 2013]; you can read his entire life on his face. I have discovered the world of big names of photography. I went to photo shoots with Demarchelier and Jean-Baptiste Mondino. I am fascinated by their ability to capture the personality in a snapshot. Three or four snapshots and that’s it. I like beauty and talent. I like to observe how they work; what makes them the best at what they do. Same with designers. Look at Karl Lagerfeld; he is fast, sharp, straight to the point.

WWD: What’s the place of fashion [fashion and luxury is headed by Virginie Mouzat] in Vanity Fair?
M.D.: VF isn’t a women’s magazine. There is no fashion section; fashion is everywhere. I don’t make the difference between fashion stories and other stories.

WWD: What is the breakdown of your readership between men and women?
M.D.: We know that the magazine is purchased 70 percent by women and 30 percent by men. But we estimate that readership is more 60 percent female and 40 male.

WWD: What are the most popular sections?
M.D.: “Vanity Flore” is written by Dorothée Parterre, a nod to Dorothy Parker, a famous contributor of the U.S. Vanity Fair. One day, I went to the Algonquin Hotel, I noticed that the coasters had quotes by Dorothy Parker. I brought some back. It was a while ago, way before I started at Vanity Fair. Another popular one is the “Gang de” [‘Gang of,’ a group shot where a person is shot with his immediate circle] and the self-portrait [The Proust Questionnaire].

WWD: VF is positioning itself as an investigation magazine. Could that be a turnoff for advertisers?
M.D.: There has never been any issue. We ran the first interview John Galliano gave after his eviction [it was translated from the U.S. Vanity Fair]. At the end, everything is approved by Xavier Romatet. There have been no brakes on this front. We have a lot of freedom, and we can write on everything, as long as the story is strong.

WWD: What’s the place of digital?
M.D.: We created the paper first because VF is, above all, an object. Reading time is two hours, 27 minutes, which is a lot; it is not a magazine that you flip, it is a magazine that you read. People keep it on their coffee table for a month. Against the tide, we focused on the paper because it’s a luxury publication; people want to touch it. It doesn’t mean digital isn’t considered. Digital follows suit.

WWD: You still have a TV show.
M.D.: Yes, it’s called “Conversation secrète” [airing on Canal Plus]. The name is a nod to Coppola’s film. It’s an interview with one guest, shot on location. Cameras are hidden: on rooftops, in apartments, in cars. It’s a big-budget production. We walk constantly. People in the streets don’t know we are shooting; they don’t see the mics or cameras. It gives a different vibe than a studio setting. Guests are more relaxed; they don’t control their image as much. I signed up for six episodes. Roman Polanski, Gérard Depardieu and Omar Sy were among the guests.

WWD: You really like to create new concepts.
M.D.: I do. When Canal Plus launched 30 years ago, there were only three TV channels in France; it was easy to be creative. Plus we had a lot of freedom. We would go pitch an idea to Pierre Lescure or Alain de Greef [both former Canal Plus executives] on a Friday afternoon. Sometimes, they would say: “You can start on Monday.” Those days are over. Marketing took over creativity. It is different.

WWD: Does Vanity Fair do things off the radar?
M.D.: Yes, and we have dinners every month that are confidential, with people who are featured in the issue. We change locations each time. It is a table of 12 to 16. There is no communications, no photos.

WWD: You’ve appeared on the cover of GQ in France. What’s your style?
M.D.: Today, I am wearing Hugo Boss. I like Lanvin. I like audacity in fashion; fashion that puts a smile on your face. And I wear a lot of The Kooples since I presented “Le Grand Journal.” They even asked me to appear in their ad campaign with my wife [Martine; the couple has been married for 40 years].

WWD: What was the most memorable interview you’ve conducted in your career?
M.D.: The next one. I am not a nostalgic or backward-looking kind of person.