Members Only Makes a Comeback

NEW YORK — Fans of "The Sopranos" will have noted the presence of an ominous man sitting at the bar of the diner in the final scene, his Members Only jacket purportedly giving the clue to the show's unexpected ending — at... 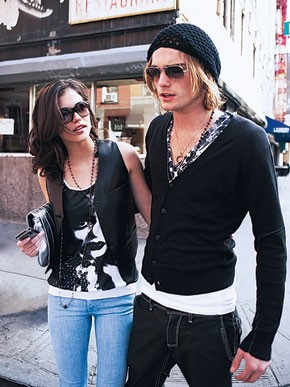 NEW YORK — Fans of “The Sopranos” will have noted the presence of an ominous man sitting at the bar of the diner in the final scene, his Members Only jacket purportedly giving the clue to the show’s unexpected ending — at least according to many blogs after the show’s finale.

That a jacket can have such significance is unusual, but Members Only, the Eighties phenomenon, has maintained its appeal in popular culture, from Jason Alexander in “Shallow Hall” to Will Smith in the “The Pursuit of Happyness.”

Now the Members Only Licensing Group, made up of several investors, is relaunching the brand for spring. The group includes Seventh Avenue veteran Arnold Simon, who serves as chairman and chief executive officer. Kelli Delaney has been named the brand’s designer and creative director. The last time the brand was sold at retail in a significant way was in 2004.

Delaney is no stranger to the celebrity world. She spent 14 years in publishing, most recently as editor in chief of American Media Inc.’s now-defunct Celebrity Living Weekly magazine. Before that, she was creative director of Star magazine and worked closely with Bonnie Fuller as fashion director of Us Weekly during its successful relaunch period.

“I think that this is a perfect time for Members Only to relaunch,” Delaney said. “The brand has spent enough time cultivating this cult following in the underground scene. Even though it went away from the shelves, it never went away from people’s consciousness, especially in a pop-culture setting. In terms of the brand keeping itself alive, it seems to have done that naturally.”

An Eighties fad phenomenon, Members Only jackets were often linked to Anthony Geary, who played Luke on “General Hospital” and who starred in one of its ads saying the Members Only tag line, “When you put it on, something happens.”

“We are resurrecting one of the most famous brands in the world, because great brands never fade,” Simon said.

The relaunch season features six leather jacket silhouettes, led by the updated version of the original iconic jacket, including a gold metallic leather version. There also are trenchcoats, such as a black perforated design and a white lamb trench; leather vests in an array of colors, and a group of knitted minidresses. Delaney said she sought inspiration from the women in Robert Palmer’s “Simply Irresistible” music video, with black and white colors and a dash of gold.

The spring line will be small in size, serving “to whet people’s appetite, and to get the consciousness of the brand,” she said.

Wholesale prices range from about $90 to $250, and the label hopes to have sales of $3 million to $5 million in its first year. The plan is to target specialty boutiques frequented by celebrities and their fans such as Scoop, Intermix and Lisa Kline.

Delaney said the launch season will focus on women’s wear because “I want a new group of women to learn about the brand without it being diluted by people thinking it’s men’s wear only.” Men’s clothes will follow for fall 2008.

Her tabloid background has taught Delaney a thing or two about Young Hollywood’s influence on fashion trends, and she hopes to create a collection celebrities and their fans will pick up and, naturally, be photographed in. Asked for her target customer, Delaney mentioned the likes of Mischa Barton and Kim Kardashian.

Even the look book emulates the celebrity lifestyle. Delaney is mocking up a celebrity weekly magazine with a story line about a love triangle in Young Hollywood.

“We have a Members Only MySpace page set up, and the majority of people who joined us are hipsters and scenesters from Young Hollywood,” she said. “That’s a good indication.”