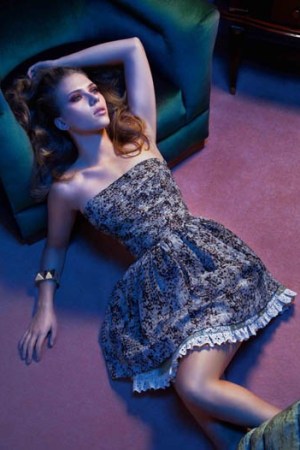 MANGO’S WOMEN: Spanish fast-fashion firm Mango tapped a trio of American hyphenates to appear in its spring catalogue and ad campaign. Sophie Auster, a singer-actress-model and daughter of American writer Paul Auster, wears styles such as a black strapless dress with lace insets and tan cropped pants with black platform sandals. The shoot took place in the same recording studio once used by Jimi Hendrix and the Rolling Stones. Auster, who appeared in “LuLu on the Bridge,” based on her father’s novel, and “Circuit,” is working on her second album with the group One Ring Zero. Dree Hemingway appears in the catalogue wearing an unbuttoned denim jacket revealing three cross necklaces and just a bit of skin and rolled up shirts. Scarlett Johansson’s third campaign for Mango takes an elegant turn with the actress wearing a strapless party dress with tiny folds on the bodice and lace trim on the skirt. In another image, she wears a sleeveless trench. Mario Sorrenti photographed the women and Mango creative director Damián Sánchez styled the shoots.
— Sharon Edelson

KISS ME, KARLIE: Sparks are flying at Aquascutum, with a spring men’s and women’s ad campaign meant to conjure an intimate, fleeting moment. The campaign, shot in a London studio by Willy Vanderperre, features models Karlie Kloss and Roch Barbot. Michael Herz, head of the brand’s women’s wear design, said the shoot was inspired by “escapism, returning from a summer music festival, and dancing in the moonlight. It’s the story of a couple caught before or after an embrace, at dusk or dawn.”

Herz said he chose Vanderperre after working with him on a shoot for the December issue of i-D. “I loved the way he worked with lighting, and in the campaign I wanted to express emotion through light and movement,” said Herz, adding the story of the carefree couple will continue into the fall collection. The spring campaign is the first under the brand’s new owners Belinda Earl and Harold Tillman, and will break in the March issues of the British editions of Vogue, Harper’s Bazaar, Esquire and GQ, and in Vogue Italia and L’Uomo Vogue. — Samantha Conti

COVER CHOICES: While this year’s March fashion books feature, for the most part, the typical group of familiar faces, there are a few surprises in the mix. Not usually one for rocking the boat with its cover choices, this spring Vogue will feature the decidedly goofy Tina Fey. Glamour, meanwhile, decided to go posh for spring, enlisting (for the first time) Ellen von Unwerth to shoot its cover girl, Victoria Beckham. And supermodel Kate Moss will appear on the cover of Harper’s Bazaar, photographed by Peter Lindbergh.

Elle opted for Keira Knightley, while InStyle is betting on Anne Hathaway, one of the many A-listers in next month’s movie “Valentine’s Day.” Marie Claire also looked to “Valentine’s Day” for its cover subjects — Jennifer Garner and Jessica Biel, who comes to the Hearst fashion title on the heels of a February Vogue cover.

Lucky landed Keri Russell for its cover, Allure shot cover m.v.p. Jessica Simpson, while country singer Carrie Underwood will be Cosmopolitan’s next cover girl. And perhaps hoping to capitalize on the “Precious” buzz, Women’s Health chose Paula Patton, one of the film’s stars and wife of R&B singer Robin Thicke, for the cover of its March issue. — Nick Axelrod and Amy Wicks

NEXT: Now that it’s gotten all the publicity it can out of the controversial Times Square billboard featuring President Obama wearing one of its coats on the Great Wall of China, Weatherproof is out for more buzz: it’s contacted former vice presidential candidate, current Fox News commentator and presumed presidential-candidate-to-be Sarah Palin to appear in its upcoming women’s collection campaign. Weatherproof is awaiting response from Palin’s team. In the meantime, the Obama billboard will be replaced Wednesday with an image of Mount Rushmore, to continue with the brand’s “presidential campaign” theme. — A.W.