Notes From the Correspondents’ Dinner

By Amy Wicks and John Koblin and Zeke Turner on May 2, 2011
View Slideshow 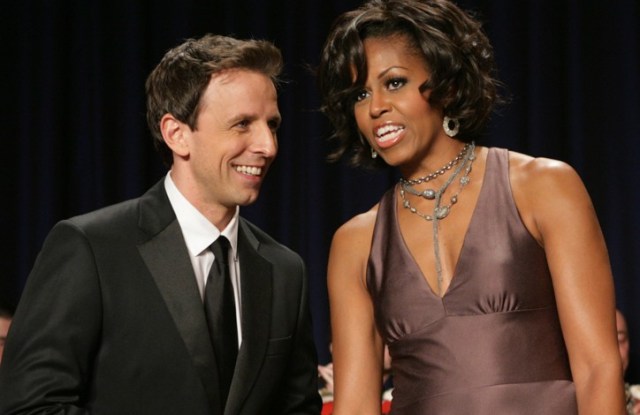 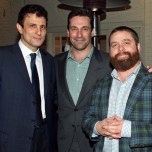 D.C. COMICS: President Barack Obama was in the middle of his monologue — or, as some put it, his official roast of Donald Trump — at the White House Correspondents’ Dinner on Saturday night, when he acknowledged his lack of popularity these days.

“I even let down my key core constituency: movie stars,” said Obama.

The room started to bust out. “Just the other day, Matt Damon — I love Matt Damon! Love the guy — said that he was disappointed in my performance. Well, Matt, I just saw ‘The Adjustment Bureau…’”

When Obama arrived as President two years ago, Hollywood lined up. The Correspondents’ Dinner, traditionally a sweaty, soggy affair for reporters and their sources, suddenly turned into a star-studded event. In the Age of Obama, Steven Spielberg, the Jonas brothers, Justin Bieber, Kim Kardashian and Donatella Versace have all stepped on the red carpet outside the Hilton.

“I will tell you who can definitely beat you, Mr. President: 2008 Barack Obama,” said Seth Meyers, this year’s stand-up performer, who probably was speaking on behalf of all of Hollywood. “You would have loved him. So charismatic, so charming. Was he a little too idealistic? Maybe. But you would have loved him.”

As the bloom has come off the Obama rose, so has the star power, it seems. There were stars in D.C. this year, sure, but…

“Ladies and gentlemen, get our your camera phones, here’s Ed Henry!” bellowed Tammy Haddad, the mother hen of the D.C. press corps on stage at her annual predinner brunch. Haddad upgraded locations this year — away from her house on a cul-de-sac in the suburbs to Katharine Graham’s grand old house on a quiet street in Georgetown. “Get your cameras ready. More cameras!” she continued, trying to gather enough star power for a decent picture.

“Shaun White, where are you?” she said, summoning the snowboarder whose claim to fame is at least 14 months old.

“Great, great — you’re saying I’m B-list?” said “Milk” screenwriter Dustin Lance Black, when asked where are the celebrities were. “I think they’re all in England. That’s where the party is. A lot of my friends flew out there to do those parties. I think there’s a competing party this year.”

“There’s so much choice of everything at the moment,” said Newsweek editor in chief Tina Brown later Friday night looking exhausted after a pair of transatlantic flights at The Daily Beast’s cocktail pregame. “They don’t know quite what to do. Most of the anchors were stuck at the royal wedding.”

The weekend officially kicked off the night before at the St. Regis for the Time-People party. There were a few minor celebrity sightings — Steve Buscemi was the biggest draw.

“I think the genesis of this party was about working journalists having a good time,” said People managing editor Larry Hackett, sounding almost apologetic. “The celebrities may not be here in the numbers they were here before, but that doesn’t make it any less fun.”

A few hours later, a few celebs could be found smoking on the terrace of The New Yorker’s shindig at the W.

“I can tolerate it for a couple of nights,” said Zach Galifianakis, hiding in a corner. “The drinks are free. We have a view of, uhhhh.” He stared at the Washington Monument looming across the street.

Mira Sorvino and her husband, Christopher Backus, slipped in. “This isn’t my first rodeo, son,” she said, standing just inside the door after arriving form the People party up the street. “We actually didn’t know that many people, but we had a nice time anyway.”

Out in the hallway, Meyers stood all by himself by the women’s room holding a nearly empty bottle of Corona. But even if the celebs were lonely, one constituency won’t ever abandon the Correspondents’ Dinner.

“What a ratf–k,” Barry Diller said on the big night Saturday while everyone filed into the dining room in black tie to find their seats. “My weekend was great up until the moment I left Connecticut at 4:30 to get on a plane to get into this costume to come here. And it will be good again when I get back on the plane and go to Connecticut tonight.” He turned and threw an arm around his new partner for Newsweek and The Daily Beast, Jane Harman.

“You’re here? I just saw you on TV two hours ago,” said David Remnick to Tina Brown, as she was sinking into her chair at dinner next to Colin Powell.

The talk of the night became Meyers’ very solid performance. Unafraid to bomb, his jokes were for an inside crowd. He skewed highbrow (jokes about the Times’ online pay model, the Huffington Post’s parasitic relationship with the rest of the news business, Ginni Thomas’ phone call to Anita Hill and Julian Assange) and it went over well.

“He is so good,” said Vanity Fair editor in chief Graydon Carter at his after party at the French Embassy. He thought the crowd was “smarter this year — well with one notable exception.” That is, The Donald.

“He owned that room in a way that very few people have in the 17 years I’ve been coming here,” Carter said. “He is at the absolute pinnacle of that business now.”