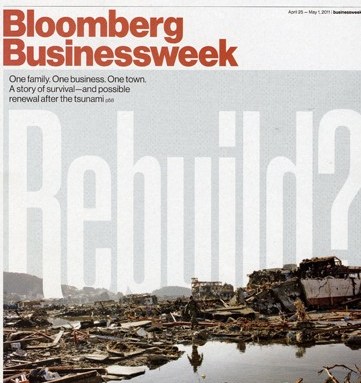 A dark horse to be sure, Bloomberg Businessweek has become a favorite of the design community. While the magazine’s covers have been setting a high bar for other weeklies, the magazine’s creative director, Richard Turley, an import from The Guardian in England, is basically unknown. On Thursday night on the seventh floor of the Bloomberg tower, the Society of Publication Designers hosted an event for Turley to introduce himself and explain how he approaches his work.

Turley stood on stage in a dark gray T-shirt and jeans in front of about 80 people, mostly designers and design students. “You do work too much as New Yorkers, and probably as Americans,” he said, warming up with some comedy. “One of the first things when I got over here, a lot of people come from Time, and they’re insane, Time. They never don’t work.”

“And your TV sucks,” he added. “The programs are good but the way you watch TV is wrong.” He popped open a bottle of Amstel Light and continued mumbling through the meat of his presentation. “I don’t think about the future of magazines very much,” he said. “I have my job, and I do my job, and then I’ve never really kind of worried about the future of magazines. I think we can’t get ourselves pent up about this — just do your f–king job, just get a magazine out, and let’s try not to worry about it.” Everyone laughed.

“And I don’t think about the iPad,” he added.

Turley’s recipe for success at Businessweek is one part rigid slavery to the grid — he chose type size and leading that would allow for 66 lines on a page, divided nicely into 11 modules that inform every design decision in the book — and one part commitment to playing on top of all the structure. He said he tries to create a two-tiered reading experience each week so readers can just as easily flip through the magazine and also read it cover to cover. To that end, he’s peppered the front section, “the snake,” with a superficial layer of doodles, arrows, small images and what he called “sticky things.” He said he stole some of his design sensibility on this front from Chris Dixon at New York magazine. “New York’s genius,” he said, is that a reader can pass over the magazine very quickly, and “yet you don’t have to feel bad about yourself for not actually reading it.”

Business magazines as a category also present their own special set of obstacles to visual story telling. “We have a terrible problem with old white guys and it’s impassable. There’s nothing you can do about it. These are a few ways we deal with our white guy problem: We lighten them very dramatically, overwhelm them with type, put them on their side…” Turley said, flipping through different design treatments of Jeff Bewkes, Julian Assange, Steve Jobs and the cast of characters that fill his pages. Then there are the endless stories about the visually mundane, housing bubbles and commodities markets. “Often we have no imagery,” he said. “It happened this week, it happens quite a lot. We just imagine things.”

Turley, a quick study of the company line, explained how the open seating plan in the Bloomberg offices encourages the magazine’s art directors and editors, who sit amongst each other in the office, to collaborate. “Bloomberg is a very ego-flat place to work,” he said.

After the talk was over, Luke Hayman, a partner at Pentagram who has worked on redesigns for titles like Time, The Atlantic and, most recently, Adweek, had serious plaudits for Turley. “I think it’s the magazine that everyone is looking at,” he said. “It’s a breath of fresh air. They’re so courageous — the covers they’re doing! I’ve never seen anything like it in this country. And especially for a business magazine that you think would be slightly more conservative, it’s very brave.” Hayman, by the way, was also up for the creative director job at Businessweek.

Asked if he thought Turley was getting noticed in the design community, Hayman didn’t hesitate: “Absolutely, no doubt about it, he’s a star.”

For the first quarter of 2011, ad pages in Businessweek were up 48.8 percent over the same period last year.