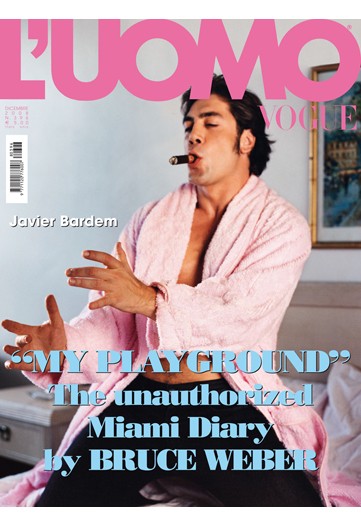 FRANCA’S CODA: For many, the financial crisis has provoked a reaction more commonly found in turtles: pull your head inside your shell and hide. But not Franca Sozzani. Last July, she ignored all naysayers to produce the so-called “Black Issue” of Vogue Italia, the fashion tome Sozzani has steered for the past 20 years. She followed that up by creating an Africa theme for the November issue of L’Uomo Vogue, including donating 50 percent of the issue’s advertising revenue to Africa-related charities. Now she’s given free rein to photographer Bruce Weber, who filled the bulk of L’Uomo Vogue’s December issue with a 100-plus page portfolio depicting his vision of life in Miami. Sozzani celebrated the results last Friday with a dinner cohosted by Moncler’s Remo Ruffino at Miami’s Casa Tua that drew the likes of Marc Jacobs, Naomi Campbell, Andre Balazs, Jay Jopling and Cornelia Guest. “With the crisis today, people need to dream. And it’s only in dreaming you can forget the reality,” Sozzani said by way of explanation as she sat in the backyard of Weber’s Golden Beach home two days before the party. “Otherwise, why do a magazine? You already have the newspaper.”

Which is why she wanted to devote so much space to Weber’s work, all with nary a fashion credit in sight. “L’Uomo Vogue is not exactly what you call a fashion magazine anymore,” she pointed out. “Basically, I am more free than anyone else because I don’t think that you sell clothes through a [fashion] credit. I think that you go through an image, that you sell a dream, and [then] the clothes.” For example, of the cover shot, she said, “I think that Javier Bardem in a pink bathrobe is more a fashion statement than to have something with a big logo on his shoulder.”

She is similarly uninterested in featuring celebrities for the sake of newsstand sales. “It’s not about [selling]. Absolutely not,” said Sozzani, who pointed out that she doesn’t feature them on the cover of Vogue Italia. “We do for L’Uomo Vogue, but not just because they represent celebrity. You should show people that are doing something interesting,” pointing to her choice of French philosopher Bernard Henri-Lévy for the Africa issue. “It symbolizes a concept.”

Weber echoed her sentiment in his portfolio, which was drawn from photographs he’s done over the past three years of the Miami scene, featuring civilians as well as professional models and celebrities like Penélope Cruz, Sienna Miller and Edward Norton. “The whole idea is not to just show pictures of personalities, but also show pictures of the heart of Miami,” said the photographer, who has maintained a home in Miami for a decade and first met Sozzani when she was hitchhiking across America in the early Eighties. (The front of book expands on the theme by featuring articles on Art Basel Miami Beach, the art fair that took place last week.)

“Usually people come here and see only one side of Miami,” said the editor, who wanted to change that. Similarly, she wants to shift the prevailing attitude towards the failing economy through her magazines. “We should not think about the economy in terms of something negative or something that will destroy creativity. We have to give ideas…suggestions and fantasies,” she said, adding, “As we say in Italian, ‘You make the law to destroy the law.’ I really don’t know about circulation. I can even tell you I don’t care. When I was doing the Black Issue, everybody told me, ‘You will not sell one copy.’ Well, we reprinted the magazine. Maybe nobody had tried before, so they didn’t know they were wrong.” — Elisa Lipsky-Karasz

DISHING THE DIRT: Burberry has gone back to nature for spring, with an ad campaign shot on location at Petersham Nurseries, the posh garden center outside London that boasts a restaurant with dirt floors. The campaign, shot in color, breaks in the February issues of magazines including Vanity Fair, Vogue and W in the U.S., and in Esquire, GQ and Harper’s Bazaar in the U.K. The campaign was designed by Burberry creative director Christopher Bailey and shot by Mario Testino. Models Lily Donaldson, Eden Clarke, Alexina Graham and Richard Wyndham slouch and pout alongside actor Alex Pettyfer; musicians George Craig and Sam Beeton; and photographer Emily Hope against a background of greenery. Burberry has focused on outerwear — consistently a big seller — as well as the newly expanded denim and sport collections, jewelry and shoes. The Gardener Bag makes its debut in the campaign. “I wanted the mood to be gentle, relaxed, romantic and about a quiet, beautiful sense of luxury,” said Bailey. “This campaign highlights the spirit of our wonderfully crumpled classics.” — S.C.

STILL ON TRACK: VF Corp.’s Wrangler is expected to reveal today that it has re-signed NASCAR superstar Dale Earnhardt Jr. to his sixth annual contract to represent the Wrangler Jeans Co. brand across all marketing initiatives in 2009. However, it has decided to exit its sponsorship of Earnhardt Jr.’s actual racing team at Hendrick Motorsports, meaning the Wrangler brand will no longer adorn the “88” car.

Earnhardt Jr. will continue to appear in advertising, in-store signage, product ticketing and consumer promotions for the brand. Wrangler Jeans Co. is sold in the mass market channel, including Wal-Mart, Target, Kmart, Shopco and Pamida. The jeans sell for less than $20. Earnhardt Jr. has represented the brand since 2004, prior to which Wrangler had a long-standing endorsement deal with his late father, racing legend Dale Earnhardt. Craig Errington, vice president of marketing at Wrangler, said the decision to exit the Hendrick Motorsports deal was due to “strategic and budgetary” considerations.

Another sports superstar, New York Jet Brett Favre, will continue to represent the Wrangler Five Star brand, which is also sold in the mass channel but whose customer base skews older than Wrangler Jeans Co. The Wrangler brand rings up annual total retail sales of $1.7 billion, according to VF Corp. — David Lipke