Calvin Klein Jeans has Eva Mendes and Jamie Dornan back for spring. 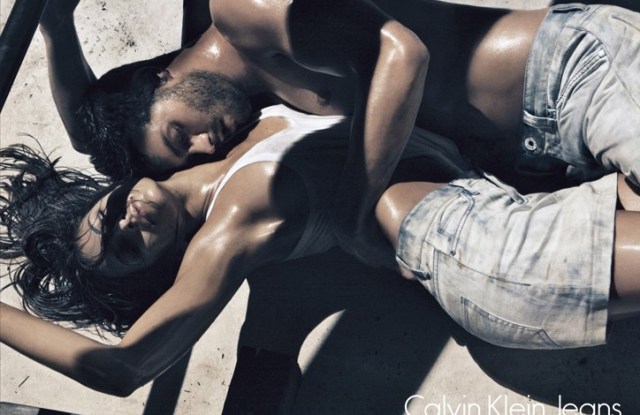 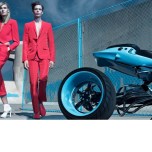 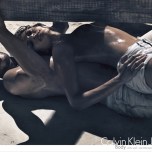 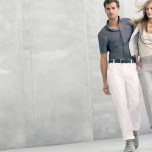 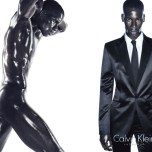 TRAFFIC STOPPERS: Calvin Klein Jeans has Eva Mendes and Jamie Dornan back for spring, and the sexy pair undoubtedly will raise eyebrows when the images of them rolling around in the sand, barely clothed, go up at Houston and Lafayette Streets and at the High Line in New York. In addition, a six-page insert will run in Vanity Fair in March and a four-page insert will appear in Glamour. Spreads also will run in Interview, InStyle and V magazine. The ads were again shot by Steven Klein.

This story first appeared in the January 11, 2010 issue of WWD. Subscribe Today.

For Calvin Klein white label, Dornan joined models Edita and Vladimir for the spring campaign, shot by Nathaniel Goldberg in La Jolla, Calif. All the campaigns were produced under CRK, Calvin Klein’s in-house ad agency and Fabien Baron, of Baron + Baron. As for ck Calvin Klein, which will only run in Europe, Craig McDean shot models Liu Wen, Constance, Mirte, Mark Cox and Will Eustace in Los Angeles. A spokesman said the print buy is up 10 percent for spring, adding the company is still working on its digital ad strategy.

GOING, GOING…: Speaking of controversial billboards, the White House has asked Weatherproof to take down its billboard in Times Square featuring President Barack Obama, and the company plans to comply. A spokesman told WWD that within one week, new creative will be posted. Weatherproof will take a sizeable loss on the transition from the old Obama ad to a new one, although the spokesman declined to quantify it. As for the new ad, he would only say it will be “apropos, but not controversial.”

TV TIME: It’s less of a hassle than having your own reality show — InStyle magazine will be featured on tonight’s episode of ABC’s dating show “The Bachelor.” On the first group date with new bachelor Jake Pavelka, six girls will arrive at the Shangri-La Hotel in Santa Monica, Calif., and will get to appear in an InStyle photo shoot. The results of that shoot will appear in the February issue, on sale Friday. At the shoot, the women consulted with creative director Rina Stone and fashion director Hal Rubenstein. Managing editor Ariel Foxman said the magazine doesn’t typically shoot “real women,” but the program’s audience dovetails with InStyle’s readers. “We are always looking for ways to broaden the brand, whether it’s on TV or digital,” he added.

In other TV news, Vogue creative director Grace Coddington will make an appearance today on “The Martha Stewart Show.” The taping was devoted to cats and why they make great pets. Stewart recalled, “I first fell in love with the Dominic Calico Persian when I saw a fantastic photo spread in Vogue magazine a couple years ago.…The model Karen Elson, dressed as Coddington, [was] posing with these amazing-looking cats.…I looked at these pictures for days, and I had to find out more about the cats — not about the fashion — so I called Grace.”

FERRE’S NEW GIRL: Hair tousled and naturally glowing, “It” girl Dree Hemingway is lending her looks to Gianfranco Ferré’s spring ad campaign. Designers Tommaso Aquilano and Roberto Rimondi said when they met the great-granddaughter of Ernest Hemingway, they were impressed by her affability and taste. “We know she’s very trendy right now, but she really reflects the feminine and sensual message of the spring collection,” said Aquilano. Hemingway is also the face of the new ads for Spanish fast-fashion retailer Mango, alongside Scarlett Johansson.

The Ferré pictures, shot by Inez van Lamsweerde and Vinoodh Matadin in a New York studio, were developed in sepia-toned black-and-white to better display the soft and dreamy mood the designers were after. Hemingway wears floaty pleated silks, which are tempered by a graphic cross-shaped structure upon or around which the former dancer balances her poses. Fastened to some of the dresses is a version of a Ferré staple — the safety pin. Reinterpreted by the duo with a bigger head, it’s the first time the accessory appears in a campaign.

The ads broke in major fashion titles in January, but a budget was not disclosed