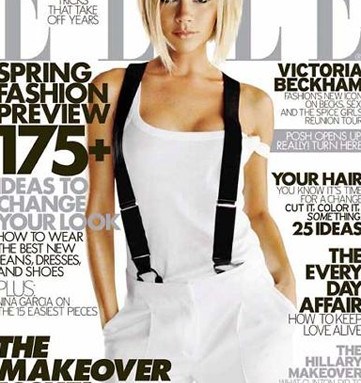 COVERING THE WINNERS AND LOSERS: Beyond the cover lines and the fashion credits, there’s that celebrated face that can make or break a magazine’s newsstand sales. And if that face is a brunette with a handsome husband and a family the size of a farm team — or wife of an international soccer star — chances are she helped sell the most magazines last year.

A search of numbers from the Audit Bureau of Circulations found that Angelina Jolie, Victoria Beckham and Lauren Conrad were among the most salable cover faces for fashion monthly titles in 2008, while Nicole Kidman, Carrie Underwood, and Rachel Weisz were the least. That said, the losers shouldn’t bear the entire burden: Several of the worst-selling issues fell in January, which is typically a soft month for newsstand sales, or around the holidays, when consumers were dealing with more pressing economic concerns.

At Vogue, the October issue with Weisz on the cover was the magazine’s poorest seller, with 276,000 copies, while September, unsurprisingly, was Vogue’s best seller at 559,000 copies. The fat fall fashion issue featured Keira Knightley. At Elle, Beckham was the title’s best-selling subject last year. Her January cover sold 413,000 copies. The worst was December’s Underwood, registering 253,611.

In Style’s March issue with Desperate Housewife Eva Longoria Parker outsold the rest of the year’s copies, with 888,912. The underperformer was July with Anne Hathaway at 585,170 issues. Marie Claire’s best seller was July, thanks to the magazine nabbing the stars of “Sex and The City” ’ for its cover as the movie hit theaters. The issue sold 440,948 copies. The December issue featuring Jennifer Connelly was the worst performer, with 191,000 copies. Harper’s Bazaar sold 213,195 copies of its March issue when it put bad girl Lindsay Lohan on its cover, but Drew Barrymore didn’t fare as well. Her November cover sold 119,501 copies.

Lucky’s September issue also sold best for the shopping magazine — repeat cover subject Milla Jovovich sold 336,000 issues. But its June issue with Amanda Peet registered 205,000 copies. At Glamour, Jessica Simpson’s June issue sold 775,000 issues, Glamour’s best of the year. Kidman was not as appealing: Her December cover sold 460,000 copies — the worst single-copy sales in recent history for the title. Cosmopolitan sold nearly 2 million copies with Scarlett Johansson in August. But while country-music-singing Simpson fared well for Glamour, she was Cosmo’s worst seller for the year when she appeared on its December issue, which sold 1,565,128 copies.

Though Longoria Parker and Johansson were best sellers for In Style and Cosmopolitan, they fared the poorest for Allure. The duo fell victim to the economic downturn: They appeared on the November and December issues of the beauty title, which both sold 190,000 copies each. Allure’s best seller? Beckham once again — her August cover sold 273,000 copies.

“The Hills” star Conrad was the best seller for Shape, selling 447,969 copies in January, and Jennifer Lopez was the best seller for Self in September (376,000 copies), as the mother of twins was training for her first triathlon. But fewer readers were interested in Renée Zellweger and Kelly Ripa. Zellweger was Self’s worst seller in October, selling 254,000 copies. The November issue of Shape, featuring Ripa, sold 258,200 copies.