After featuring a relatively unknown model in its fall campaign, Escada is adding some star power in front of, and behind, the lens for spring. 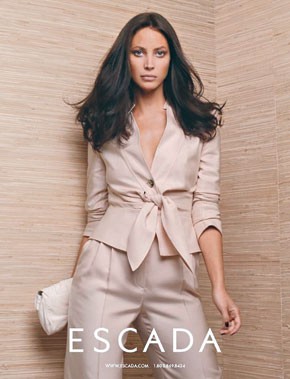 CHRISTY DOES ESCADA: After featuring a relatively unknown model in its fall campaign, Escada is adding some star power in front of, and behind, the lens for spring. Christy Turlington was shot by Patrick Demarchelier in New York for the campaign, which will launch next month. The German brand is also ushering in a new image with the spring campaign, shot as more modern and contemporary than past seasons.
— Amy Wicks

BLOW SUICIDE VERDICT: Stylist Isabella Blow committed suicide by swallowing weed-killer, according to a coroner’s report released Wednesday. According to British press reports, the Gloucestershire, England, coroner Alan Crickmore told an inquest he recorded a verdict of suicide after he heard that Blow, who died May 7, told both her sister and nurses at the Gloucestershire Royal hospital she wanted to die. Blow’s sister Lavinia Verney is said to have told the inquest that Blow had tried to commit suicide three times since she began to suffer from depression six years ago. Blow’s psychiatrist, Dr. Ian Pennel, told the court that events including her grandfather’s suicide, the death of her younger brother and “the perception of her waning celebrity,” had contributed to her depression. Blow, who had a reputation for both outlandish outfits and championing the careers of the fashion industry’s emerging stars — including Alexander McQueen — most recently held the post of fashion director at Tatler.
— Nina Jones

THE NOSE KNOWS: Scarlett Johansson told OK! Magazine she will take legal action against Us Weekly after its cover story in this week’s issue implied the actress had rhinoplasty. But Us Weekly contends the magazine did nothing wrong — it never said Johansson had surgery and it included a quote from Johansson’s rep in the piece. Us Weekly’s Dec. 17 story on Hollywood plastic surgery uses two photos of Johansson, one from 2000 and a photo taken this year, on its cover and inside. The magazine quotes cosmetic surgeon Geoffrey Tobias saying, “It could be that the bridge was thinned out,” in reference to Johansson’s nose, but also quotes Johansson’s spokesman: “She has never had a nose job — ever.” They also use a quote Johansson gave The New York Times in 2003: “I definitely believe in plastic surgery,” she said. “I don’t want to be an old hag.”

“Our story questions whether Johansson, based on a photo comparison and expert opinion, ever had plastic surgery,” said an Us Weekly spokesman. “The controversial subject of Hollywood and plastic surgery is a legitimate issue of interest to our readers, which we explore in depth in our cover story. Nowhere in our story do we categorically state that Ms. Johansson has had any plastic surgery.”

Perhaps, but two photos of Johansson are used to illustrate the story on its cover. Us Weekly could have gone with a less controversial choice, such as Janet Jackson, who has admitted to having plastic surgery.

OK! posted on its Web site Tuesday reactions from Johansson and her rep. “I have always been straightforward with the press regarding my body image and I am very concerned that my fans (and perhaps even my employers) will feel misled. Thus, I feel compelled to take immediate legal action against Us Weekly,” Johansson told the magazine. A source close to Us Weekly said neither Johansson nor her rep made any contact with the magazine since the issue hit newsstands Wednesday, and the magazine had not yet been served legal papers.
— Stephanie D. Smith

WHAT A DOLL: Even after “The Devil Wears Prada,” Johnny Depp as Willy Wonka and Edna Mode in “The Incredibles,” the iconography of Anna Wintour seems to know no bounds. This time, it’s a more benign version and a self-described homage: the popular digital paper doll site Stardoll has added Wintour’s image to its roster.

The site, which describes itself as an “online dress-up and make-over destination,” has more than 400 digital paper doll versions of celebrities, most of them household names to the 10- to 17-year-old demographic that is Stardoll’s base. Wintour is listed in the Celeb category, several slots below the only other person on the list (besides supermodels) who might be said to have a fashion background — Lauren Conrad, star of “The Hills” and perennial intern at Wintour’s own Teen Vogue.

“She’s been requested by our users,” said Stardoll chief executive officer Mattias Miksche, adding the other dolls came about the same way. All the dolls are created by a design team that studies photographs of the celebrity. “We get thousands of requests every day. I can’t say she’s number one, but she’s definitely up there.” The Sweden-based Miksche said Wintour’s fame transcended national boundaries; the site is international, with U.S. users accounting for about 35 percent of its traffic.

It’s unclear whether Wintour would endorse the knee-high silver platform boots bestowed upon her wardrobe — her spokesman had no comment — but perhaps they’re a relic from her London youth. In one image, her office looks strikingly like the cafeteria in Condé Nast’s 750 3rd Avenue offices in New York, home to W, Details and WWD, among others.

“This is a tribute and an homage,” Miksche said. “We like her and we want our users to make her look beautiful and fashionable.”

So where were one of the editor’s best-known accessories, her sunglasses? Miksche paused. “We’ll have to fix that.” Within the hour, fast fashion being a rather literal term in the digital world, sunglasses had been duly added.
— Irin Carmon

NEW HIRES: Esquire has raided Condé Nast for its two latest fashion and retail advertising hires: Louis Coletti comes from Men’s Vogue to serve as international fashion and specialty retail director, and Randi Siegel, formerly of House & Garden, has been appointed American fashion and retail director. Esquire’s ad pages were down 2.1 percent in 2007, though next year’s 75th anniversary should provide plenty of selling opportunities.
— I.C.