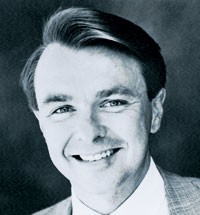 CLINTON/EDWARDS 2004: Some say John Edwards is the new Bill Clinton. But many say Michael Clinton is the current John Edwards. Michael Clinton, Hearst Magazines’ executive vice president, is a dead ringer for the Democratic vice presidential candidate, and the resemblance is putting a crimp in his morning commute. “People stop me on the street and say, ‘You’re John Edwards!’” said Clinton, “And I say, ‘No, I’m Michael Clinton.’ Then they get really confused.” The Hearst executive has never met his politically minded doppelgänger, but has spent time with the wife of Democratic presidential nominee John Kerry. Teresa Heinz Kerry spoke at a private luncheon for the company’s magazine editors on June 10. “She’s from Pittsburgh, I’m from Pittsburgh — I’m one degree of separation from this campaign.” Clinton, who declined to reveal his own political leanings, has also met former president William Jefferson Clinton (no relation). “I introduced myself, and he said, ‘Great name.’” With the Republican National Convention descending on New York next month, one might expect to hear of further — and perhaps more heated — cases of misidentification in coming weeks. Alas, Clinton is headed to Tuscany on vacation at the end of August, where he won’t risk bumping into any GOPers — Jeff Bercovici and Sara James

NOT THE LEAST BIT COUNTRY: The new Country Home redesign looks eerily similar to back issues of Real Simple. And no wonder: Robert Valentine, who designed the prototype of Time Inc.’s pared-down lifestyle bible, served as a consultant on Country Home. “It was never said to me, ‘Make this look like Real Simple,’” said Valentine, who came on board long after Meredith executives OK’d a new, larger trim size and heavy matte paper stock. Valentine did, however, introduce a new Real Simple-style font. “I wanted to help them define themselves,” he said. “The whole point was to change the feel of country.”

So does that mean country isn’t cool? “For years, we’ve been wanting to break out of the country box,” said Country Home editor in chief Carol Sheehan. “We think we can appeal to people who don’t have a quote-unquote country style.”

All fine and good, but exactly how much can a magazine “borrow” from another title’s design without attracting the attentions of legal counsel? “There can be a claim for what we call trade dress infringement when a magazine duplicates another magazine’s cover,” said Albert Robin, a trademark attorney with the New York firm Cowan, Liebowitz & Latman. “Similarly, there have been cases — but fewer cases — involving what’s inside the magazine.” Since Country Home has retained its original logo and added a, um, unique color band to the magazine’s spine, a trade dress suit isn’t likely. And for now, at least, no one at Real Simple seems to mind the mimic. “Anytime you see something that’s reminiscent of [your work], it’s flattering,” said Real Simple managing editor Kristin van Ogtrop. “People can copy bits and pieces, but it’s the synthesis of the design and the content that really makes a magazine sing.” — S.J.

JUST DON’T TELL HER SHE’S OLD: To mark the company’s 50th anniversary, Ann Taylor’s launching a new advertising campaign featuring 50 models who’ve influenced fashion in the last five decades. Linda Evangelista, Patti Hansen (with daughters Alexandra and Theodora Richards), Audrey and Angela Lindvall, Karen Elson, Twiggy and others posed for Annie Leibovitz in clothes from the fall line. “The 50 women were chosen because they personify what it means to be ‘Ann Taylor’ — a vibrant woman of all ages and backgrounds,” said Jerome Jessup, Ann Taylor senior executive vice president. Two pages from the campaign will appear in most of the Sept. women’s magazines while Vogue (like WWD, part of Advance Publications Inc.) will run the entire campaign as an outsert in New York, L. A., Chicago and San Francisco markets. — S.J.

CONVENTIONAL WISDOM: Covering the Democratic National Convention is grueling stuff. Especially for the staff of Comedy Central’s “The Daily Show.” A team of the show’s producers, editors and on-air talent decamped to Boston this week, and after moving into their temporary housing in the dorms at Boston University, staffers went “Old School,” apparently reliving their undergrad days. “We’ve reverted to college behavior,” said correspondent Ed Helms. “Last night we had Ramen noodles for dinner and played poker until 3 a.m.” No word yet on who served as R.A. — S.J.