Karl Lagerfeld poured a lot of himself into his latest collaboration with Coca-Cola Light in France. 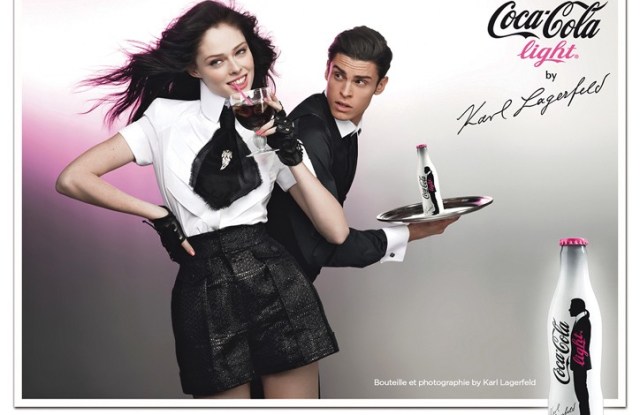 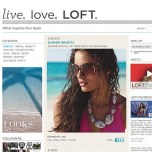 COCO-COLA: Karl Lagerfeld poured a lot of himself into his latest collaboration: with Coca-Cola Light in France. Not only did he design a special aluminum bottle capped in vivid pink and adorned with his unmistakable, emphatic silhouette — dark suit, high collar, jutting ponytail — he also shot the ad campaign. The fizzy images, featuring models Coco Rocha and Lagerfeld regular Baptiste Giacobini, are slated to break across France on April 28, including in magazines and on billboards. One of the billboards will be splashed across Galeries Lafayette which, along with Colette, will get a jump on selling a limited edition boxed version of the bottle, with matching bottle opener, priced from 47 euros, or $64 at current exchange. Lagerfeld has long been a fan of diet cola, and says he prefers to drink it in a delicate crystal goblet to accentuate the taste. To wit: Rocha hoists her Coca-Cola Light in his favorite Lalique glass, dressed in fingerless gloves and a high-collared look from his signature collection for spring. Next up for the indefatigable Lagerfeld? A campaign shoot for the fall Karl Lagerfeld collection, this time featuring Giacobini and Iris Strubegger. — Miles Socha

LOFT BLOGS AT TUMBLR: Loft appears to be the first fashion company to try out visual blog platform Tumblr, starting with a blog and guest editor for the month of April. The retailer has hired personal style blogger Jessica Schroeder of “What I Wore” to blog on Tumblr and reblog the same content on her own. The Loft page launches today. A banner ad on Schroeder’s page explains the partnership.

This story first appeared in the April 5, 2010 issue of WWD. Subscribe Today.

“It felt really natural to us,” said Loft’s marketing manager of digital programs and client outreach Julie Fredrickson. Fredrickson, recently hired from Equinox, started as a fashion blogger herself and sold fashion blog network Coutorture to Sugar Inc. in 2007. The Tumblr platform lends itself to easily sharing content in the same way as Twitter because a blogger can repost anyone else’s story with one click. Guest editors have been embraced by fashion companies who want their blogs to tap into a wider network of fashion enthusiasts.

In addition to Schroeder’s posts, the Loft blog will publish tips about such topics as food, style and music. Loft has a very active Facebook page with 48,860 members, as well as pages on Twitter, YouTube, Flickr and Vimeo, and a blog at LiveLoveLoft.com. — Cate T. Corcoran