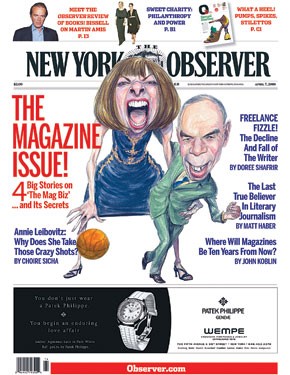 COLLECTOR’S ITEM: When The New York Observer parodied the April cover of Vogue with a cartoon of an open-mouthed Anna Wintour bouncing a basketball as Advance Magazine chairman S.I. Newhouse Jr. hugs her, chuckles from cubicles were heard all over Midtown — including 4 Times Square. Now it appears André Leon Talley will own the last laugh: Observer owner Jared Kushner bought the original artwork from the illustrator, Victor Juhasz, for the Vogue editor at large. At least seven people placed serious bids — two of which were from within Condé Nast, including Talley and another mysterious bidder whose identity couldn’t be learned. In the past, original art commissioned for the Observer has said to have been sold for anywhere between $1,000 and $10,000. According to sources close to the weekly, Juhasz’s piece went for a price in the middle of that range. No word on whether the piece will hang in Talley’s office at Vogue — on display for Wintour and other staffers to view — or in his Hastings home.

FOR THE DEFENSE: Playboy’s stock price might be down, but don’t criticize its success with brand extensions. Christie Hefner, chief executive officer, defended the company’s success in capitalizing on its brand in a letter in the May 19 edition of Forbes. The letter was a response to “Dangerous Curves,” a piece in the April 7 issue, written by senior reporter Dirk Smillie. He writes mainly about Penthouse Media Group, but manages to make a few digs at Playboy in the process. Hefner’s response? “If your writer had done a bit of homework before writing ‘Dangerous Curves,’ he would have seen that Playboy knows a thing or two about brand extensions.” She wrote about the “Girls Next Door” on the E network and the “highly successful Playboy Club at the Palms Casino in Las Vegas…” She added Playboy’s licensing group reported a 30 percent revenue increase last year and a 40 percent jump in segment income.

A spokeswoman for Forbes said it stands behind the article, which questions the stock performance of Hefner’s company, noting that licensing revenue at Playboy accounts for less than 10 percent of the firm’s income. “Ad sales for Playboy magazine and TV revenues are down, and the company’s overall revenues are flat,” she said.

Playboy reported its first-quarter earnings Tuesday and the magazine’s revenues were down 14 percent to $20.1 million, due to a decline in circulation and ad sales. The company expects ad pages to be down 5 percent in the second quarter.

REMEMBER WHEN: It has been 19 years since Milton Gendel, the Rome-based arts writer and photographer, last set foot in New York, but at nearly 90, he returned for good reason: the first U.S. exhibition of his photographs. “It’s like I never left,” he said at a party in his honor Monday evening. “Oh, there are these towers that stick up here and there, but the city is the same. The friends are the same, including all the ghosts.”

The photographs are languid yet unaffected, peopled by great names in their natural habitats, and their New York home until May 30 is at the Verdura salon, Gendel having been a friend of the late Duke Fulco di Verdura. “I’m not sure the photos can compete with the jewelry,” said Gendel modestly, looking around the Fifth Avenue salon.

Among the Herreras, Paleys, assorted titled folk and Salvador Dali, there is a humbly dressed Queen Elizabeth, circa 1976, feeding her Corgis that is one of Gendel’s favorites. Said Travel + Leisure editor in chief Nancy Novogrod, a friend of Gendel’s and a co-host that evening, “The photos capture a glamorous and intimate moment that represents a life that few of us live right now but we all dream of. It’s all about ease and grace in living, with people who are both recognizable and also somehow iconic even when you don’t know who they are.”

TV TIME: Magazine vet Martha McCully is switching channels. After six years as executive editor at In Style and nine years as a top editor at Allure, McCully is signing on with Coty Prestige as on-air expert for its HSN Lancaster brand sales. First up: an appearance Thursday hawking antiaging serum 365 Elixir and a range of self-tanners and sun care products. “As a former beauty editor I tried everything,” stated McCully. “I’m excited to work with Coty and HSN to make the brand a success in the U.S.” In addition to her magazine gigs, McCully served as a judge on HGTV’s “Design Star” series for the past three seasons.