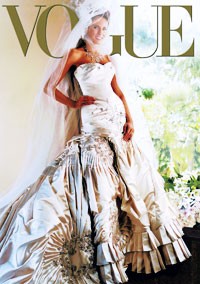 Twenty yards of fabric and a couple of hundred rhinestones later, they had a convincing knockoff. “We had the Vogue cover that we were working off of, of course,” said Broecker. “The corset was made on Thursday. Then we had another fitting after that.” The dress wasn’t completed in time for rehearsals on Friday, so Hilton just wore the foundation. When she sat down on a sofa on stage, the petticoat unexpectedly tipped up and flashed the stand-in audience. “It was sort of an accident,” said Broecker. “We didn’t design the dress to do that.” However, the gag was such a hit that Richards reinforced the skirt with steel tubing to make sure it still popped up once the extra fabric was added.

“Paris loved the dress so much we gave it to her,” said Broecker, whose team also designed and constructed all of Hilton’s dog Tinkerbell’s costumes for the show. The dozen or so Louis Vuitton bags that appeared in another Hilton skit, however, were outsourced to a prop shop in Queens, where, Broecker said, they will most likely be returned this week. Just in case anyone was hoping or worried they might end up on Canal Street.

CLOSED-DOOR POLICY: Like all editors, GQ’s Jim Nelson has multiple constituencies to please: his bosses, his readers and his staff. Hey, two out of three’s not bad.

GQ’s owners ought to be satisfied with the title’s 8.2 percent increase in newsstand sales in the second half of 2004, according to numbers submitted to the Audit Bureau of Circulations. Subscriptions were up 1.7 percent, meaning the mass cancellations some predicted would result from GQ’s radically younger approach after Nelson took over almost two years ago never materialized. The news is also good on the advertising front, with pages up 23 percent in the first quarter, according to publisher Peter King Hunsinger. (GQ is a unit of Advance Publications Inc., parent of WWD.)

But the mood in GQ’s editorial offices is less than euphoric. The frequent complaint is that, unlike Art Cooper, his convivial predecessor, Nelson is a distant and unapproachable boss, conducting most business from behind a closed office door with the help of an inner circle that includes deputy editor Michael Hainey and executive editor Andy Ward. It doesn’t help that Nelson is also frequently out of the country on both business and leisure travel.

Nelson disputed his characterization as an editor in a high castle. “I do feel like probably at the beginning I relied on a smaller circle and then expanded it,” he said. “But that’s kind of natural. The first year you spend kind of hunkered down, trying to figure out the scope and pace of the magazine.”

The transition, he said, is just about complete. That includes the overhaul of the staff that began with Nelson’s elevation to editor in chief. Of the 60 or so full-time staffers on the masthead in June 2003, about half are no longer at the magazine, including much of the senior editorial staff. Nelson’s most recent move was to promote senior editor Jason Gay to articles editor, replacing Chris Knutsen, who took a job with Radar. Senior photo editor David Carthas also left recently to become director of photography at Premiere.

Meanwhile, the job of publicity director remains unfilled. A recent Page Six gossip item asserted that GQ was having trouble finding someone who could handle Nelson’s “huge ego.” Nelson claimed the item didn’t bother him: “After that ran, I started getting calls from all kinds of people who were interested in the job.” — Jeff Bercovici

ROCK ON, ANNA: With fashion week just hours away, a horde of fashion editors and designers put aside their preparations Wednesday night to honor the late Herb Ritts and raise money for AIDS research. Kenneth Cole, Michael Kors, Donna Karan, Anna Wintour, Jann Wenner, Ingrid Sischy, Brandon Holley and Amy Astley all turned up at Sotheby’s for the amfAR/ACRIA event, as did Richard Gere, Sir Elton John and Julianne Moore.

During the cocktail hour, GQ’s Jim Nelson lingered by the elevators, where he could keep an eye on new arrivals like Jon Bon Jovi, whose rock-star hair met with Nelson’s approval. “Once you’re 35 and you can still pull that off, you’re pretty cool,” he said. (How much more so, then, as Bon Jovi is actually 42.)

Wintour and her companion, Shelby Bryan, arrived on the late side, explaining they’d accidentally gone to Cipriani’s first. “It’s always at Cipriani’s,” she said. They quickly fell into conversation with Wenner, discussing their teenage children’s college preparations and spring break plans. When Wenner asked Bryan about his support of Howard Dean (presumably for the chair of the Democratic Leadership Committee), however, talk drew to a halt. Turning to a reporter in their midst, Wenner said, pointedly, “I think we’d like this to be a private conversation.” Politics, apparently, being more hush-hush than family.

Wintour, at least, let her guard down during dinner: She was seen bobbing her head to Bon Jovi’s acoustic performance of “Livin’ On a Prayer.” — J.B.