Poor Joanne Lipman. First The Wall Street Journal sends her off after 22 years of service and now Conde Nast can barely find a place for her to sit. 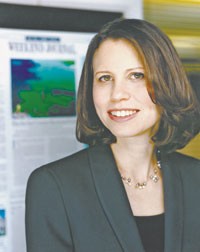 CORNERED OFFICE: Poor Joanne Lipman. First The Wall Street Journal sends her off after 22 years of service with a few pretzels, some cheese slices and wine, according to New York magazine. And now Condé Nast can barely find a place for her to sit.

Lipman begins her new job today as editor in chief of the forthcoming Condé Nast business magazine, set to launch in 2007, and the magazine’s corresponding Web site, expected to make its debut sometime next year. But with the company (which is also the parent of WWD) still in the midst of an ongoing real estate shuffle, there is not yet enough space freed up in its 4 Times Square headquarters to assign permanent offices to Lipman or David Carey, the new business group’s president.

Until arrangements can be made for publications or employees to relocate to the company’s three alternate Manhattan addresses, Carey will continue to sit on Condé Nast’s executive floor, on 11.

The two hires he’s made since the project was announced — Teresa Gaffney and Marie Wolpert — are currently working out of a conference room just outside his office.

Lipman, meanwhile, will temporarily use an office on the 18th floor. Her neighbors there will be Domino’s edit and advertising staffs, corporate creative, a photo studio, some accounting and finance services, the operators who answer the Condé Nast phone lines and a lounge for all the company’s receptionists, according to longtime employees.

“We both expect to have three or four offices in the building between now and next spring,” Carey said of the arrangement with Lipman. “Hopefully after the next move we’ll be on the same floor.”
— Sara James and Jeff Bercovici

FILM FORUM: With layoffs imminent, print circulation faltering and newsprint ad budgets declining, what does The New York Times do? It goes to the movies.

On Monday, in an attempt to bring in new ad dollars and younger readers, the Times announced plans for a free pocket-sized magazine about movies called OnMovies. The title, to be published 18 times a year, will be handed out to moviegoers waiting to buy tickets at Loews Cineplex Theatres in major metropolitan markets beginning Dec. 16. Jyll Holzman, senior vice president of advertising for the Times, will oversee it, and senior vice president, chief advertising officer for The New York Times Media Group Denise Warren will be in charge of ad sales. Editorial content will be managed by deputy culture editor Jim Schachter. The mini mag will feature a blend of “reedited” pieces from the Culture section, stories from the Times’ Web site and original material, according to a Times spokeswoman. A.O. Scott, Manohla Dargis, David Kehr, Charles McGrath, Laura Holson and Lola Ogunnaike are expected to contribute.
— S.J.