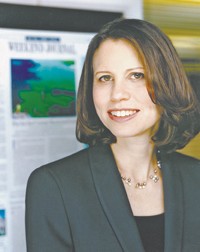 DOWN TO BUSINESS: Nine months and one week after Joanne Lipman was hired away from The Wall Street Journal to edit the fledgling Condé Nast business magazine, the company has finally decided on a name for it. A spokeswoman for the Condé Nast Business Group wouldn’t confirm the final choice, but acknowledged the magazine will be called one of the following: Quote, Portfolio, File or Currency. Sources familiar with the launch said recent internal discussions had narrowed that list even further, to just Quote and Portfolio, with mockup covers made of each and the majority of staffers favoring the Quote logo.

A formal announcement is expected Monday, and a placeholder Web site will also go up that day, bearing the new logo and — finally! — giving some indication of what the magazine will contain.

The drawn-out search to find an appealing and available title has apparently been fraught with legal issues for Condé Nast (which also owns WWD). Among the additional names that were considered but ultimately cast aside were The Ticker (a business Web site already exists under that name); Tally (the trademark is held for business magazine use by an individual in Colorado); Condé Nast Business (the favorite of at least one corporate executive); Bonfire; Scoop, and B, which was said to be an early suggestion from group publisher David Carey.

Quote, Portfolio and File were trademarked by the company on April 25 — albeit, with “Condé Nast” attached, presumably to make it easier to secure global rights and Web domains. Condé Nast Currency, which the company has had a claim on since at least 1997, was renewed last November. At that time, the range of uses apparently was expanded to include a TV series and specials, conferences and seminars, an online magazine and wireless transmission of business information to cell phones and personal data devices.

Trademarking four names for a single launch is certainly an unusual strategy, even for an organization as eccentric and extravagant as Condé Nast. The spokeswoman said the intention was to keep several options open long enough to make a decision executives were comfortable with. One source at the company, though, said it was possible the remaining three names were still being considered for additional Web and/or print launches. Last August, when the CN Business Group was formed, chief executive officer Charles H. Townsend said it wouldn’t “be limited to one magazine.…We’re looking at seminars and conferences and a major Web presence, and wherever else this takes us.” And industry sources have maintained all along that Condé Nast was planning to acquire or create multiple media properties covering the business world.

Monday’s announcement is expected to include a timetable for the concurrent debuts of the Lipman magazine and Web site, which sources put at the first quarter of 2007. On Wednesday, the spokeswoman reiterated the first issue would arrive on newsstands “sometime next year.”
— Sara James

SPINNING OUT?: The new era at Spin is off to a turbulent start. Following murmurs of friction between editor in chief Andy Pemberton and owners Tom Hartle and Nion McEvoy, insiders at the music magazine expected word to come down any moment of Pemberton’s departure. Hartle and McEvoy hired Pemberton, former editor in chief of Blender, to take over as editor after they bought Spin in February, but sources said they’ve been unhappy with his first few issues. Hartle, however, denied there was any major personnel change in the works Thursday, insisting, “We are not planning on replacing Andy Pemberton.”
— Jeff Bercovici