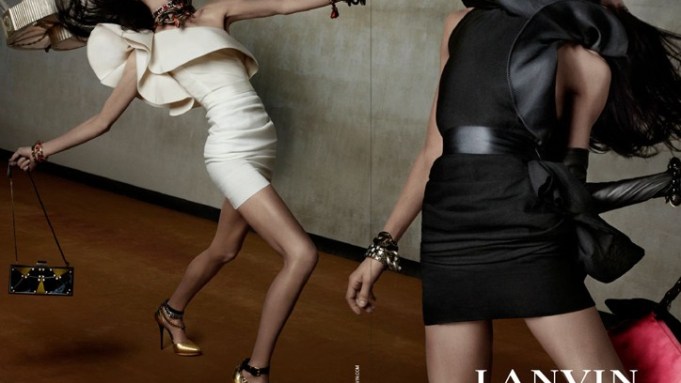 IN MOTION: Fashion ad campaigns have recently been loaded with prostrate models. “I thought maybe we need a bit of action,” said Lanvin’s artistic director, Alber Elbaz. Cue the French house’s women’s spring-summer advertising, shot by Steven Meisel and featuring Jamie Bochert in one heck of hurry, rushing down a corridor in a New York studio. “She moved so fast, even the chandelier was moving with her,” Elbaz said. Bochert was fully qualified for the fast-forward campaign, as Elbaz related that the model recently pursued a purse snatcher for 12 blocks in Brooklyn — and reclaimed her bag from the thief. “That’s the kind of girl I like,” Elbaz said.

The designer also changed gears for the Lanvin men’s campaign, enlisting photographers Inez van Lamsweerde and Vinoodh Matadin, who are a married couple, to appear on the other side of the lens, as well. “He’s not our model,” Elbaz stressed about Matadin. “We just photographed him in our clothes, and it becomes very believable. Also, to see him through the eyes of his wife and to see the love story between them — it’s a very emotional campaign.” Van Lamsweerde left all fashion statements to her husband and appears nude, her body airbrushed in red. “It took two hours to paint,” Elbaz noted. The campaigns break in February fashion magazines.

GROWING REACH: With 26 sites and counting, Hearst Magazines Digital Media will launch a new vertical late next year that “is not one you’d expect from us,” noted Chuck Cordray, senior vice president and general manager. He added the URL already has been purchased but declined to provide more information. Next summer, the digital unit also will relaunch its teen network, which includes seventeen.com and teenmag.com.

And the digital space continues to attract new advertisers for Hearst, with ad revenue up more than 20 percent year-over-year. Cordray said the focus for next year will be on the retail category, which rose more than 50 percent this year. Cordray contended advertisers are coming to the Hearst digital network because, among other things, the package of sites on which the ads will appear can be customized depending on the audience a given brand wants to reach. “Ad networks usually can’t guarantee quality like we can, and they will alter placements across their sites,” Cordray said. “The nature of our content means the audience is very tailored.”

Meanwhile, the Web continues to be a greater source of subscriptions, with 3.3 million garnered this year versus 2.5 million in 2008. House Beautiful is one of the leaders, with more than 75 percent of subscriptions sold online.

Hearst magazine sites represent more than 40 percent of the total traffic in the digital network and 50 percent of its ad revenue. According to comScore for March through October, traffic across the total network was up 33 percent, including food site Delish.com. Traffic at Cosmopolitan was up 1 percent, Marie Claire was up 19 percent and Harper’s Bazaar was up 151 percent. Kaboodle, a nonmagazine site that focuses on fashion, was up 66 percent.