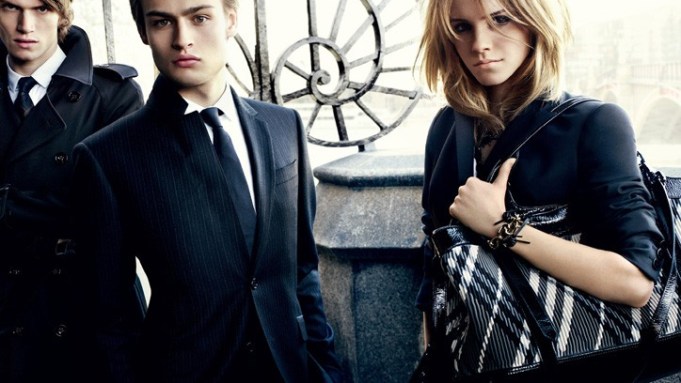 WESTMINSTER WOMAN: The news coming out of Westminster these days may be bleak — what with ongoing parliamentary scandals and a wobbly British government — but that hasn’t stopped Burberry from celebrating the historic London neighborhood in its new ad campaign. The ads — featuring Emma Watson and shot on location by Mario Testino near Burberry’s new headquarters not far from Westminster Abbey, Big Ben and the Houses of Parliament — showcase a chilly but lovely London.

“I wanted the images to represent both the rich history and the modernity of the Burberry brand, while at the same time reflecting a quiet beauty, timelessness and strength that is particularly significant today,” said Burberry creative director Christopher Bailey.

The campaign breaks in the August issues of magazines including Vanity Fair, Vogue, British Vogue and Tatler. It also will appear on the brand’s Web site early next month to coincide with the magazines’ releases. In August, an interactive digital campaign directed by Bailey that includes podcasts and behind-the-scenes footage will appear on the Burberry site. — Samantha Conti

HASKINS’ VIEW: The relationship photographer Sam Haskins has had with the fashion world hasn’t always been a smooth one. Several decades ago, a few bad encounters with “women in charge” temporarily ended his work in the industry, and it was noted in his biography that “he cherishes a positive atmosphere while shooting, and so he decided to avoid the fashion world for the time being.” In subsequent years, countless fashion photographers copied his work (a fact that still irks Haskins) but in 2001, he was rediscovered by the genre and began shooting for magazines including French Vogue, Allure, New York, Harper’s Bazaar and Le Monde.

Now, Haskins, 82, is back again with a new book collaboration with Tommy Hilfiger. “Fashion Etcetera: Tommy Hilfiger Special Edition,” is a retrospective of five decades of Haskins’ work. Out in September, the book marks his first joint publishing project with a designer and his first book in more than two decades.

“As a rule, similar projects seldom evolved into such a broad collaboration as this one with Tommy Hilfiger,” said Haskins. “My many prior undertakings with paper mills, camera manufacturers and such usually did not amount to much more than producing a calendar and an exhibition. I had simultaneous offers for collaboration on this project. Since I have admired Tommy’s clothing for many years and his proposal was so overwhelmingly warm and human, there was no contest.”

Hilfiger, who said he’s been an admirer of Haskins’ work for some time, added, “The book is well crafted and inspiring — it captures beauty through a witty and creative perspective, and is truly a one-of-a-kind piece of art in and of itself.”

Haskins, known by many for his nude photographs and “Cowboy Kate,” moved to Eastern Australia in 2002, and since has done fashion shoots in Europe and a one-man show at the National Portrait Gallery of Australia’s Canberra arena.

“It was then that I decided to produce a book in which I would further explore the many byways of the double-page spread idiom,” said Haskins. “These thoughts led to the genesis of ‘Fashion Etcetera.’ My son had persuaded me to take a retrospective look at my archive around the theme of fashion and style, and this became an important factor in my choice of the book’s content.” The new book is a combination of digitally remastered black-and-white and color photographs from the early Sixties onward. — Amy Wicks

AIMING FOR A LAUGH: Despite the recession, Glamour is seeing its lighter side in the form of a new viral video with Anna Faris, who provides a comical take of the economy. In “The Multi-Hyphenate,” an upbeat Faris begins by saying, “You know, I keep hearing that we’re in a recession, but so far it hasn’t really affected my job.” The next scene shows Faris getting ready in the trunk of a car for a film scene (the usual trailer has been canceled due to budget cuts) and she ends up doing everything on the set, from boom operator to head janitor, best boy and lead actor. The video is on glamour.com, which, according to a spokeswoman, is averaging 3 million uniques a month, a 427 percent gain versus last year. At the magazine, ad pages are reportedly up 12 percent for the July issue, which hits newsstands next week. — A.W.