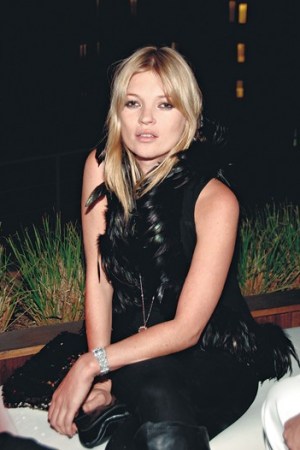 FAMOUS FACES: The pursuit of a handful of newsstand-friendly faces for September covers is over for harried entertainment bookers. And this fall, it appears blondes will have most, if not all, of the fun. Vogue photographed Charlize Theron for its September issue. The South African actress is a Vogue favorite — Theron was shot for the cover of Vogue in October 2007 and in October 2004. Allure will have “Mamma Mia” actress Amanda Seyfried. Glamour will feature newsstand favorite Jessica Simpson, whom the magazine turned to for its June 2008 cover. The blonde music/tabloid star was in the headlines Monday as People.com reported that her relationship with Dallas Cowboys quarterback Tony Romo had ended, but no word on whether Glamour was able to include the breaking news in their cover story.

W photographed Kate Moss for its September cover, and Elle will feature Jennifer Aniston (coincidentally, Aniston was on the cover of Elle UK in April). In Style will feature mother of twins Jennifer Lopez on its September cover and Marie Claire is said to have shot Ashley Olsen for its cover. This year’s shoot would give Ashley her second cover turn on Marie Claire’s September issue, after appearing on the magazine in 2007. — Stephanie D. Smith

This story first appeared in the July 14, 2009 issue of WWD. Subscribe Today.

MERCURY IN MOTION: Paula Froelich, a recent addition to the New York Times bestsellers’ list thanks to her novel, “Mercury in Retrograde,” resigned from The New York Post’s Page Six column on Monday. The feisty Froelich has worked for Page Six for almost 10 years and is noted for, among other scoops, breaking the Madonna-Guy Ritchie divorce story. She plans to focus on writing books and work in television. “Paula’s an excellent reporter,” said editor in chief Col Allan. “We enjoyed having her here and we wish her the best.” Page Six editor Richard Johnson told WWD that the Post will be hiring a replacement, although he didn’t say when. — Amy Wicks

SOCIAL STUDY: J.C. Penney Co. Inc. is embracing digital and social media for the back-to-school season with the launch of a Web site for teens and a JCP Teen page on Facebook. “This year we escalated into high gear in terms of getting deeper into social and digital media,” said Mike Boylson, executive vice president and chief marketing officer. “Traditional media is still important, but each year they are losing their effectiveness and costs are going up so we are evolving from broadcasting to narrow casting, which is much more targeted.”

JCP.com/teen has a snappier attitude than the company’s main Web site and encourages teens to “Express Yourself” and “Deck Your Room.”

The Facebook page was put up two months ago and has attracted about 8,100 fans. Boylson expects that number to grow as the ad campaign rolls out this month. “It is hard to predict social media because it is so viral,” he said. “It is so dynamic that you can adjust content once you are in the campaign because you don’t have long lead times.”

B-t-s is Penney’s second largest marketing effort after holiday. Its budget is slightly lower this year in alignment with the company’s conservative sales plan, Boylson noted. The campaign features a 60-second spot depicting students throwing a fashion show, which will be screened before films in theaters starting Friday, July 17, and features music by the band Hockey. A shorter version will air on network and cable channels beginning July 26. The spot invites teens to enter a sweepstakes via text message for tickets to Hockey concerts and to sign up for text promotions from the retailer. — Holly Haber

ON SALE: After months of speculation, BusinessWeek revealed it was up for sale Monday afternoon after Bloomberg reported that morning its owners McGraw-Hill hired investment bank Evercore Partners to find a buyer. “The move of readers and advertisers online, coupled with the impact of the recession on print advertising, has created additional urgency on the need for change,” wrote Business Week president Keith Fox in a staff memo. “Given the current market environment, the Corporation has decided to explore strategic options for Business Week.” BW’s media columnist Jon Fine posted portions of Fox’s memo on his blog.

Speculation had swirled since last summer that McGraw-Hill wanted to sell in order to focus on its textbook publishing division and stock ratings service Standard & Poors. But the sales attempt comes as advertising revenue for Business Week, as well as its competitors, has suffered. Amid the economic slump, advertisers in the automotive, financial and b-to-b categories have pulled back spending. In 2008, ad pages for Business Week fell 16 percent to 1,882 according to Publishers Information Bureau, while Forbes fell 14 percent to 2,775 and Fortune remained flat at 2,383. Circulation for Business Week has declined from 988,000 in 2005 to 936,000 in 2008, according to the Audit Bureau of Circulations. — S.D.S.

EDITING, ETCETERA: Joanna Bober has joined In Style magazine after spending the past five years at Glamour, most recently as lifestyle editor. At In Style, Bober has been appointed as life etc. director, a new position that reports to managing editor Ariel Foxman. She will oversee home, food, entertaining and gift coverage for the magazine. — A.W.