Memo Pad: Another Brick in the Wall for Fendi… Vanity Fair Parties On…

Fendi and Karl Lagerfeld took event marketing to a dazzling new summit in October 2007 when they staged a fashion show on the Great Wall of China. 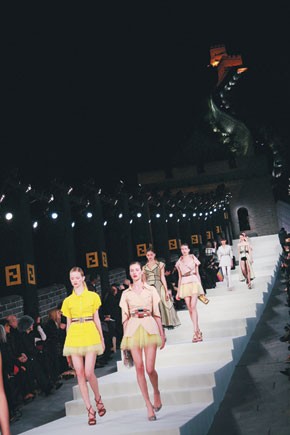 ANOTHER BRICK IN THE WALL: Fendi and Karl Lagerfeld took event marketing to a dazzling new summit in October 2007 when they staged a fashion show on the Great Wall of China, and the buzz has yet to die out. The Roman fashion house is to be awarded the grand prize from Stratégies magazine and Condé Nast in Paris today for the fourth edition of its luxury communications awards. The landmark Fendi show, which LVMH titan Bernard Arnault joked was visible from the moon, saw 88 models stalk a 300-foot length of the 2,000-year-old structure. Past winners include Hermès and Louis Vuitton for their advertising campaigns. — Miles Socha

PARTY ON: After canceling this year’s Oscar party due to the writers’ strike that gridlocked Hollywood, Vanity Fair has decided to party again. But this time around, it’ll be a less glitzy affair, in light of the economy. To be held Feb. 22 at the Sunset Tower Hotel, “the party will be a much more intimate affair than in years past; we’re going to scale back the guest list considerably,” said Graydon Carter, Vanity Fair’s editor in chief. “We’ll celebrate Hollywood’s big night the way we did when we first threw the party 15 years ago — it will be a cozier, more understated event. And one with familiar decor — given the current economy and our dedication to the green movement, we will be recycling many of the elements of years past.” Plans for the low-key gathering include serving comfort food as opposed to more opulent fare, and reusing topiaries and furniture from past parties. Sunset Tower Hotel is a smaller venue than VF’s previous Oscar home, Morton’s, where an outside tent area expanded the restaurant’s capacity. Sunset Tower is owned by Jeff Klein, who is one of Carter’s partners in his latest restaurant venture, the Monkey Bar, due to reopen in New York’s Midtown next year. — Stephanie D. Smith

MOORE TIME: Time Inc. chief executive officer Ann Moore and Martha Stewart will receive Lifetime Achievement awards from the Magazine Publishers of America and the American Society of Magazine Editors on Jan. 29. Moore will receive the Henry Johnson Fisher Award from the MPA. The award no doubt comes at a bittersweet time: Moore, like other publishing executives, is beleaguered by the economy and is currently overseeing a massive restructuring at Time Inc., including 600 cross-title layoffs. The MPA is recognizing her overall impact on publishing. “Ann Moore is the innovative leader of the largest magazine company in the United States,” said MPA president and ceo Nina Link. “Ann has transformed Time Inc., not just by successfully launching more titles than company founder Henry Luce but also by overseeing her company’s transition to digital platforms.”

Moore has served as ceo since 2002, and in that time oversaw new launches including All You, Suede, Cottage Living and Life. (Suede folded after four issues; Cottage Living folded last week; Life will live online as a photo archive). She was also the founding publisher of Sports Illustrated for Kids in 1989 and publisher and later president of People, where she helped the weekly title spin off Time Inc.’s successful offshoots In Style, Real Simple and People en Espanol.

Meanwhile, ASME will induct Martha Stewart into its Magazine Editors’ Hall of Fame during the event at New York’s Plaza Hotel. — S.D.S.

OVER AND OUT: Eddie Ross, senior style editor at Martha Stewart Living, recent contestant on Bravo’s “Top Design,” and flea-market-chic blogger, is parting ways with Martha Stewart Omnimedia, WWD has learned. Ross confirmed the move, saying that he wanted to work on his own brand. He plans to expand on his blog at EddieRoss.com (which, in a crossing of the corporate aisle, was featured in last month’s Domino), launch an online store of tabletop antique accessories under $100 and continue offering flea-market tours in various cities. He and his partner are looking for houses in Rhinebeck, N.Y., to “focus and live a good life,” Ross said. He also hinted at a book project and possibly more television.

He said he was leaving of his own volition. “I adore Martha,” he said of his boss, who featured Ross and his blog on her show earlier this fall. “She’s been nothing but so supportive of me.”

Ross became a controversial figure on “Top Design,” where he butted heads with other contestants and with judge Jonathan Adler. (When Ross was eliminated in the ninth week, Adler did not mince words on his official Bravo blog: “Eddie Ross flaunts his overly high self-esteem, but he doesn’t realize how unappealing it is and, ultimately, how self-defeating it is.”) Of his portrayal on the show, Ross said, “It was the magic of an edit. Granted, some things did come out of my mouth.” — Irin Carmon

DIGESTING DESIGN: Think of it as a Readers Digest for the fashion and design crowd — only with nicer pictures. Distill, a slick, bimonthly glossy showcasing editorial spreads from fashion and visual arts titles worldwide, unveils its second issue this week, after its debut in September. Editor in chief Colin McDowell sees it as a celebration of fashion and design — and said he hopes it’ll make life easier and cheaper for time-pressed creatives and students.

“The real creativity in fashion comes from the images’ makers — the photographers, stylists and makeup artists whose creations can lift and transcend a designer’s garment,” he said during the launch breakfast at London’s Sketch earlier this year. “For most of us, the idea of going through the vast number of fashion magazines is daunting — and expensive. For those outside the fashion industry it can also be intimidating.”

The December/January issue, which has a cover price of $7.90, carries fashion shoots from titles including V Man and Interview — and lesser-known magazines like Volt from the U.K. and Fashion Tale from Sweden. While it’s mostly a picture book, there’s some commentary on the editorial and blurbs on fashion- and design-related events taking place around the world. The December issue’s editorial board, which select the shoots featured in the magazine, includes Stefano Pilati, Michael Roberts, designer Tom Dixon and Visionaire founder Stephen Gan.

Advertisers include Versace, which took the back cover, Sony, Swatch and Tommy Hilfiger. Creative and publishing director Christopher Lockwood, whose Craft Publishing Ltd. is behind the title, said he’s obsessed with “the creative professional audience,” and sees Distill as a means of satisfying their constant hunger for inspiration. “We see this magazine as fulfilling a global requirement and celebrating good magazines from the four corners of the world,” he said. — Samantha Conti