Many of the editors, contributors, fact-checkers and assistants who worked with John F. Kennedy Jr. at George gathered at Harvard on Tuesday for a celebration of the 10th anniversary of the defunct magazine's first issue. 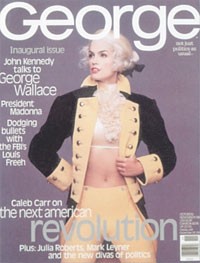 GEORGE REMEMBERED: Many of the editors, contributors, fact-checkers and assistants who worked with John F. Kennedy Jr. at George gathered at Harvard on Tuesday for a celebration of the 10th anniversary of the defunct magazine’s first issue. But neither former George executive editor Richard Bradley nor Frank Lalli, who took over as editor in chief after Kennedy died, were in attendance.

At a dinner hosted by Caroline Kennedy, Sen. Edward Kennedy told WWD a similar politics and pop-culture magazine would not work today because it would be missing one crucial ingredient: his nephew. As for his favorite George covers, Senator Kennedy said, “I still love Cindy.” Cindy Crawford appeared on the first issue, dressed as George Washington, with her navel showing.

The events started with a panel discussion on the intersection of politics and pop culture moderated by Tom Brokaw, with Roger Ailes, chairman of Fox News; CNN’s Paul Begala; Jehmu Greene of Rock the Vote; former president Bill Clinton, and California Gov. Arnold Schwarzenegger via satellite.

Begala spoke about “The Daily Show” host Jon Stewart‘s infamous, confrontational appearance on “Crossfire” as “one of the days where you just look at the clock and wait for it to be over.” Ailes, meanwhile, said his network launched “Hannity & Colmes” because “we just decided we would do the same show they did at CNN, but we wouldn’t have the people hate each other.”

“The Daily Show” continued to be a topic of conversation at the dinner, thanks to a piece by Bradley in The Boston Globe this week. Bradley trumpeted the lingering influence of George by writing that “‘The Daily Show’ owes a creative debt to one magazine in particular: George.”

That struck some at the dinner Tuesday night as a bid for attention, especially considering the rift Bradley’s book about J.F.K. Jr., “American Son,” caused with his former co-workers and the Kennedy family.

SOUTHERN CULTURE ON THE SKIDS: Reporters covering the aftermath of Hurricane Katrina for The New York Times are getting immersion lessons in the ways of the Old South. They’re staying on a 19th-century plantation in Baton Rouge, La., and a few of them are evidently even sleeping in former slave quarters.

Since shortly after Katrina struck the Gulf Coast in late August, The Times has been using the Mount Hope plantation as a base of operations for its ongoing coverage of the cleanup and rebuilding efforts. Reporters sent there work nearly around the clock for up to a few weeks, then fly home for short breaks. According to a Times staffer who’s stayed there, the experience is a lot like college: long days of hard work, with a lot of alcohol flowing at night. On any given day, a dozen or so Times employees might be working out of the plantation. Those just in the area for a night or two sleep on inflatable air mattresses in the big house, while others who’ve earned seniority sleep in outbuildings on the property outfitted with real beds.

One reporter who’d recently done a stint in Baton Rouge said some of those cabins were originally used to house slaves. A spokeswoman could not confirm their history, though she did say: “Some of our people are staying in cabins on the property that are normally rented out to wedding parties or people seeking a bed-and-breakfast. They’re fixed up as cozy B&B’s now. The house has actually turned out to be an ideal base of operations, with a big workroom on the second floor of the main building.”

Meanwhile, an e-mail sent to the Times staff back in September described Mount Hope as “five acres of huge oaks, Spanish moss and fireflies,” complete with hospitable neighbors who’ve hosted Times staffers for hush puppy fish frys. The e-mail also contained a travelogue from news assistants Cate Doty and Michael McElroy, who drove an R.V. filled with supplies from New York down to the Times reporters in New Orleans on Sept. 7: “Katrina had taken out nearly all the road signs, and we had little idea where we were. The closer we got to Baton Rouge, the farther from civilization we felt. Cate drove through the dark. Michael tried not to think of the movie ‘Deliverance.'”
— S.J.

LOVE, AMERICAN STYLE: It looks like Tango is in it for the long haul. The new independent magazine about love and relationships is ramping up its circulation and frequency just in time for its paper anniversary, in February. Tango will publish bimonthly next year (up from quarterly this year) and double its rate base to 200,000. It also has hired a new publisher, Michelle King, previously of The Knot; she replaces Ellen Abramowitz, who left in May to become publisher of another start-up, For Me.

Besides newsstand and ad performance, Tango founder Andrea Miller said she has seen another measure of the concept’s appeal in the typical response she gets from acquaintances and even strangers when she tells them about the magazine: an outpouring of story suggestions and personal disclosures. “It seems like there’s this urge people have to explore and reveal information that’s usually quite private,” she said.
— Jeff Bercovici