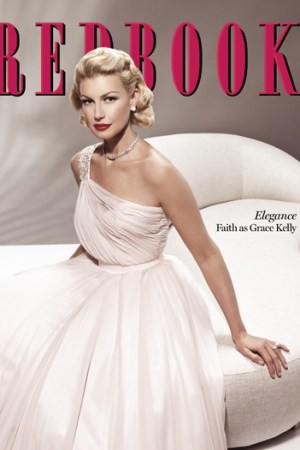 GILLES’ NEW GIG: After shooting exclusively for Elle for more than 20 years, Gilles Bensimon has landed at Redbook, where he shot Faith Hill for his first post-Elle cover. The May issue actually features four consecutive covers, where Hill poses as herself, and three of her favorite iconic blondes: Grace Kelly, Twiggy and Brigitte Bardot. A series of vintage-inspired ads from Lily of France face each inside cover. A spokeswoman added that Bensimon has already shot another upcoming cover and the magazine expects to do more with him in the future. — A.W.

NO TURNAROUND AHEAD: Retail and international fashion advertisers are pulling back all around, and it isn’t helping The New York Times Co. The newspaper publisher on Tuesday recorded a loss of $74 million for the first quarter, compared with a loss of $335,000 the prior year period. Total revenues fell 18.6 percent, to $609 million, and the company reported an operating loss of $61 million, compared with an operating profit of $6.2 million during the same period a year ago. During a conference call with analysts, president and chief executive Janet Robinson said advertisers have cut spending in all categories — national, retail and especially classified. Advertising revenue fell 27 percent and she expects the second quarter will be similar to the first. She also pointed to international fashion as a tough category during the period.

As for digital and the persistent question of whether the Times will once again begin charging for online journalism, Robinson said the company has recently looked at more than 30 online organizations and determined the ad model used at nytimes.com has generated more revenue than other organizations, which are in some cases much larger. However, she wants to find a way to add more revenue without affecting the site’s display ad business. “We will continue to explore different payment models,” Robinson noted. Total Internet revenues dropped 5.6 percent to $78.2 million during the quarter.

Another media company, Playboy Enterprises, informed analysts Tuesday it had received notice from the New York Stock Exchange that it is not in compliance with one of the continued listing criteria. To avoid being delisted, the company must submit a plan to the stock exchange within 45 days that describes how it expects to comply with continued listing standards within the next 18 months. Playboy is below the criteria because its average market cap over a 30 trading day period was below $75 million and shareholder equity was less than $75 million. — Amy Wicks

NEW VOICE: In her latest role, Rachel Bilson will play a fashion editor at In Style. The actress will pen a monthly Q&A beginning with the May issue, answering readers’ style questions and revealing some of her favorite trends. The former star of “The O.C.” has been a fixture in the pages of In Style and was profiled in the August issue when she launched a clothing line with DKNY Jeans. When managing editor Ariel Foxman asks readers who has the best personal style, “Rachel Bilson’s name comes up more often than not,” he said. “They love her particular take on eclectic chic. So I thought wouldn’t it be fun to connect with Rachel with our audience, give her a place in the magazine to talk directly to women about her styling quirks and fashion obsessions.” Is the actress interested in a career change? “I am not planning on quitting my day job to be a full-time fashion editor, although I am really enjoying it and it intrigues me very much,” she said. “I’m actually flattered more than anything that people want to ask me questions about style. I am honored to do it.” According to her first column, Bilson’s spring favorites include Lela Rose for Payless flats, Lanvin sandals and Matta scarves with pompom edges — “a cool alternative to fringe.” — S.D.S.