Memo Pad: Healthy Conflict … For Your Nose Only … Beckman Upped …

HEALTHY CONFLICT: For all the excess testosterone sloshing around, it looks like Men’s Health and Men’s Fitness are ready to settle their differences like gentlemen. Men’s Health editor in chief David Zinczenko and... 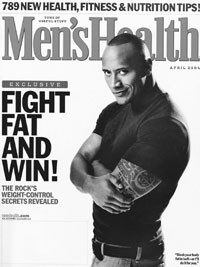 HEALTHY CONFLICT: For all the excess testosterone sloshing around, it looks like Men’s Health and Men’s Fitness are ready to settle their differences like gentlemen. Men’s Health editor in chief David Zinczenko and Tom Beusse, president of Rodale’s Men’s Health & Sports Group, made their way over to the offices of American Media to meet with Men’s Fitness editor in chief Peter Sikowitz and others on Tuesday afternoon. On the agenda was Rodale’s claim that Men’s Fitness had based its new look a little too closely on the larger and more successful Men’s Health. In March, Rodale gave notice of its intent to sue for trade dress infringement, although it has yet to file an actual complaint. Asked about what went down at the summit, Sikowitz merely joked, “It was our regular poker game.” According to a source with knowledge of the talks, however, the two editors discussed how to resolve their dispute without resorting to a court fight. While no definitive agreement was reached, the meeting did produce the beginnings of an understanding as to how similar is too similar, said the source. A Rodale spokeswoman put it somewhat differently: “We continue to vigorously pursue the trade dress case and look forward to a resolution.” — Jeff Bercovici

FOR YOUR NOSE ONLY: Chanel is handling the fall ad campaign for its No.5 fragrance with the kind of secrecy normally reserved for Navy SEAL missions. Beauty journalists who attended a screening of the campaign’s centerpiece — a two-minute commercial starring Nicole Kidman — were asked to sign a confidentiality agreement prohibiting them from publishing anything about what they’d seen in any issue with a cover date earlier than October. Anyone who wished to receive a press kit for the campaign also was asked to sign a nondisclosure form. This struck some reporters as odd, to say the least, the purpose of a press kit normally being to garner, well, press. “I’ve never heard of anything like this,” remarked one veteran fashion journalist. Asked about the unusual measure, a Chanel spokeswoman said the gag sheets were made necessary by the terms of the company’s deal with Kidman and director Baz Luhrmann, who shot the spot. “Basically, we are bound contractually by our legal agreements with talent of when the film can be viewed, aired or discussed in print,” she said. A version of the film — which is being touted as the trailer to a movie that was never made — will be shown in cinemas beginning Oct. 29; it breaks on TV Nov. 11. But don’t tell anyone. — J.B.

BECKMAN UPPED: In a move intended to spread the corporate marketing love, Advance Magazine Group yesterday appointed Richard Beckman president of the Condé Nast Media Group, an entity created to handle corporate sales and integrated marketing for its various divisions (WWD is part of AMG). Beckman, who also was named an executive vice president of AMG, was previously chief marketing officer for Condé Nast. The shuffle means that Parade magazine, the newspaper supplement with a circulation of 35 million, will be part of AMG’s corporate marketing efforts. “We have, from a sales perspective, been marketing the company collectively,” said Beckman. “This formalizes that. It’s clearly a much more effective setup to have the Condé Nast Media Group as a separate entity that can equally represent the assets it’s responsible for.” — J.B.

PEACE OUT: A year after he was kicked upstairs into a nebulous “brand development” job, Emil Wilbekin is leaving Vibe. Wilbekin, who as editor in chief led the hip-hop title to its first ASME General Excellence award two years ago, is joining Marc Ecko Collection as vice president of development, effective Aug. 2. Of course, that still leaves the small matter of what, exactly, it means to work in development. “It’s everything from hiring designers to overseeing ad campaigns and p.r. to developing book projects,” Wilbekin explained yesterday. He’ll also have a spot on the editorial board of Complex, Ecko’s men’s fashion magazine. Wilbekin scored the job by borrowing a move from Dick Cheney: When Marc Ecko told him he was thinking of hiring a right-hand man, Wilbekin offered himself. “He was shocked because he thought I’d never leave Vibe,” recalled Wilbekin. “But I’ve been here for 12 years, so I was kind of interested in expanding my own horizons.” Of his new boss, Wilbekin said, “I like that he’s kind of fashion-forward, but in a very reverse way.” — J.B.