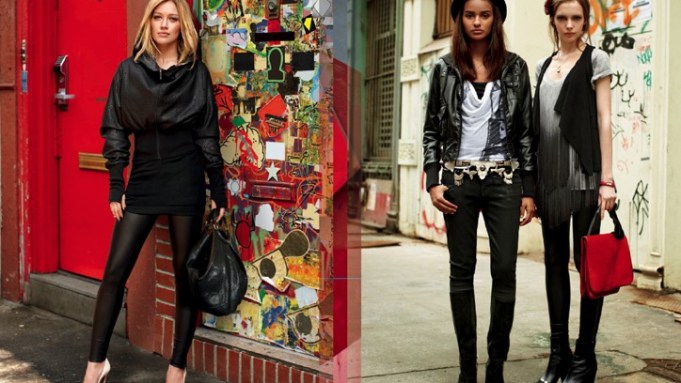 ON THE STREETS: DKNY Jeans’ fall ad campaign takes Hilary Duff to the streets. Shot by Scott “The Sartorialist” Schuman in his traditional “captured on the street” style, the images feature Duff with two models — Sophie Srej and Gracie Carvalho — in SoHo in New York. Each model is wearing a head-to-toe look from the Femme for DKNY Jeans line designed by Duff. She wears a black bomber jacket, sweater dress and black leggings. The Femme for DKNY Jeans line launches in stores next month for back-to-school selling. The campaign will run in national magazines including Teen Vogue and Seventeen beginning in September. — Julee Kaplan

CLOSING TIME: Janice Min closed her final issue at Us Weekly Monday night with Jessica Simpson and Tony Romo. The broken-up couple will be the magazine’s lead story this week, with a cover photo of a wayward-looking Simpson and a story on Romo’s involvement with another woman. Min will depart the celebrity title this week after six years at the helm, but helped advise acting editor in chief Michael Steele during the close. According to sources close to the magazine, Steele did most of the heavy lifting on this week’s issue — running meetings and seeing the magazine to bed through the late evening hours. As for Min, there’s one more task left even after this week: Us Weekly’s staff plans to give her a send-off on Tuesday with a party sources said will be held at Tenjune. — Stephanie D. Smith

PREGNANT, SORT OF: London Fog is amping up its image for fall with an ad campaign featuring Gisele Bündchen — but not her baby bump. In the ads, Bündchen strikes a seductive pose in nothing but a trenchcoat. The campaign was shot a few weeks ago and the images revealed Bündchen’s pregnancy, but her visible baby bump has been retouched out of the campaign to “respect her privacy,” said chief marketing officer Dari Marder, who works for London Fog parent company Iconix Brand Group. Bündchen had previously appeared in ads for Rampage — also an Iconix brand — and was slated to do another campaign but, for a few reasons, including her pregnancy, she will now appear in ads for London Fog instead — in a trenchcoat rather than tight-fitting jeans. Marder said the media buy is up a little versus last fall to maximize Bündchen’s presence in the campaign. The ads, which were shot by photographer Nino Muñoz in West Hollywood, will break in October magazines such as Glamour, Elle, Cosmopolitan and Vogue. — Amy Wicks

She succeeds Jacki Kelley, who had been recruited from Yahoo in 2007 by Wenda Harris Millard, formerly co-chief executive officer overseeing media. Kelley left for Universal McCann in April, and Millard left shortly afterward for a job as president of Media Link, a marketing and advertising firm. — Irin Carmon