Amanda Seyfried stopped by the Windsor Arms in Toronto to get portraits taken by In Style magazine. 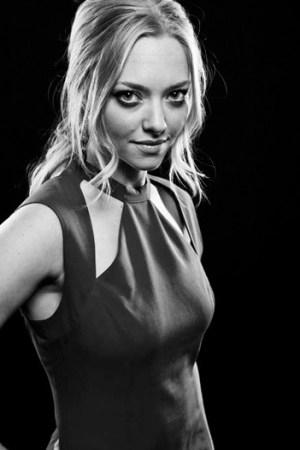 HOLLYWOOD UP NORTH: With Ferraris and Maseratis on the streets and red carpets rolled out in front of every hotel, store and even a few restaurants, Hollywood took over Toronto this weekend for the annual Toronto International Film Festival. Festivalgoers saw Matt Damon, George Clooney, Megan Fox, Drew Barrymore and even Oprah Winfrey. While the talk show queen was seen walking through the Four Seasons, Damon and Amanda Seyfried stopped by the Windsor Arms to get portraits taken by In Style magazine for the November issue. In Style also shot Colin Farrell, Abbie Cornish and Mariah Carey. Later today, the Time Inc. title and the Hollywood Foreign Press Association are throwing a party at the Windsor Arms, and Clive Owen, Edward Norton, Rob Lowe, Michael Cera, Colin Firth and Eve are expected to attend. — Amy Wicks

WHERE’S KARL? Most guests were into their third or fourth glasses of Champagne and Claudia Schiffer and Nadja Auermann were complaining of hunger before Karl Lagerfeld finally appeared at German Vogue’s 30th birthday party in Berlin Friday night, with male muse Baptiste Giabiconi, in an upswept hairdo — as well as Eric Pfrunder, Katherine Marre and Sebastien Jondeau — in tow. And while Berlin Mayor Klaus Wowereit took the title for last to arrive, Lagerfeld was definitely the first to leave. Almost as soon as the cameras stopped flashing, and a few words of thanks had been spoken, the designer and company were off to board a private jet before Berlin’s night flight ban came into effect — much to Vogue editor in chief Christiane Arp’s surprise, as she later admitted in a second round of thanks to all who had made October’s triumvirate of 732-page anniversary issues possible.

“Karl had to go. I didn’t know, and I forgot to mention so many people,” she told the 170 assembled guests. But if Lagerfeld was the first to go, he was also the first Arp asked to act as co-chief editor of the October mega issue. “And he didn’t hesitate for a minute,” Arp said. Lagerfeld’s July shoot in Berlin was a big secret — except perhaps to whomever delivered the 6,000 kilos of clothes sent for the production. The second co-editor, Peter Lindbergh, remained happily ensconced at the birthday party alongside Donata Wenders, Wowereit, Schiffer, Auermann and legendary German stylist Florentine Pabst (who worked with him on his issue). Guest editor number three, Bruce Weber, sent his regrets — and best regards — from New York. — Melissa Drier

A NEW HOME FOR MARTHA: Martha Stewart Living Omnimedia Inc. is developing an exclusive line of home improvement goods for The Home Depot Inc., replacing revenues lost from its arrangement with Sears Holdings Corp.’s Kmart division, which expires in January.

The deal covers products in the outdoor living, home organization and home decor categories. Patio dining and conversation sets will range from $399 to $1,999 and begin to hit stores in January. New types of products are expected to be added next year.

“Partnering with The Home Depot allows us to offer a wider audience the product and ‘how-to’ information they need to complete all of their home improvement projects,” said founder Martha Stewart.

SEPTEMBER EXPANSION: “The September Issue” expanded its screenings to California, Texas, Colorado and other locales nationwide this past weekend, and the documentary crossed the $1 million mark on Sunday, according to the movie’s own Twitter feed. Figures from Box Office Mojo reported “The September Issue” raked in nearly $1.3 million across 111 theaters this weekend, for a per-screen average of $6,271. The documentary on the inner workings of Vogue also is playing in the U.K. and Australia, and as of Aug. 23 had racked up $168,000 abroad. So far, the flick is holding its own against other successful documentaries: after four weeks, Michael Moore’s “Fahrenheit 9/11” registered $94 million domestically, but its per-screen average was $3,580 as the politically themed movie showed on more than 2,000 screens. — Stephanie D. Smith

NEW PAIR OF EYES: Time has named another director of photography, Kira Pollack, to oversee images for both Time and time.com. Pollack joins the magazine from The New York Times Magazine, where she served as photo editor for 11 years and also helped launch the Times’ glossy sports magazine, Play. Before the Times, she spent four years as a photo editor at The New Yorker. Pollack succeeds Alice Gabriner, Time’s acting photography director who took over for MaryAnne Golon, who left in June 2008 after 24 years at the magazine. Gabriner had been at Time for a decade, but only served as director of photography for a year before decamping in March to become the White House photo editor and deputy director for its photo office. — S.D.S.