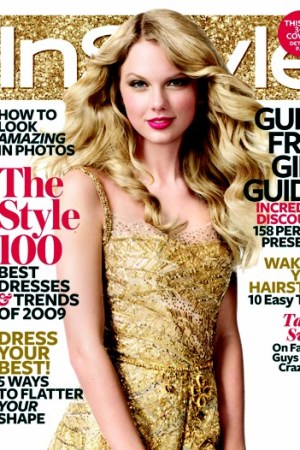 TALKING REALITY: Remember the days when 3-D meant donning a pair of flimsy paper glasses? InStyle is about to raise the bar in so-called augmented reality with its December cover, featuring Taylor Swift. Readers who hold up the cover to their Web camera will see Swift spring to life surrounded by snowflakes in a 45-second video that ends when she signs her autograph across the screen. “We’re using this in an interesting way; it will bring the issue to life,” noted managing editor Ariel Foxman.

Inside the issue, publisher Connie Anne Phillips has extended the augmented reality theme in a special “gifting in 3-D” marketing program. With ad pages harder to come by these days, the title will introduce 12 new advertisers to the December issue and see a 3.6 percent increase in pages, to 256 pages, driven by the 3-D technology. YSL Beauté, Intel, Michael Kors, Nordstrom and Armani have signed on to the program, and the ads will have a click-to-buy e-commerce feature. “At YSL Beauté, we are always very excited by new ways of reaching our customers, so when InStyle approached us with this new technology, we immediately wanted to be a lead part of this initiative,” said Gillian Gorman, vice president of marketing. In total, there are 25 participating advertisers and each brand will also have a 30-second customized video that pops out of a gift box. “This is our most buzzed about issue [of the year] on a consumer level, and with this click-to-buy feature, it’s all about ROI and taking consumers to the point of purchase,” said Phillips.

MAYBE ACCESSORIES INSTEAD?: In what could be seen as a rare admission for an up-and-coming actress these days, Ashley Tisdale told WWD on Tuesday she has no interest in starting her own clothing line. “I’ve started a production company; I guess that’s kind of my clothing line,” said Tisdale. The star of the “High School Musical” films stopped by Sephora on Fifth Avenue for an event hosted by the store and Glamour. “I’m here to support Skip1.org,” noted Tisdale. “It’s about skipping one thing a day, like a cup of coffee, and donating that money instead.” Tisdale signed autographs for more than 300 Sephora “beauty insiders,” and Glamour made a $10 donation to Skip1.org for every purchase made during the evening. Still, Tisdale made it clear she isn’t going to completely steer clear of fashion. “Maybe I’ll start my own line of handbags,” she admitted.

JO MALONE’S NEW GIG: Jo Malone, founder of the Estée Lauder Cos. Inc.-owned fragrance and treatment brand of the same name, will star in a four-part television series for the BBC in which she’ll act as a mentor to budding entrepreneurs hoping to bring their products to market. The show’s title and run date have yet to be confirmed. Each 60-minute episode will feature a different product category, such as items for the home and garden, accessories and food and drink. Malone will guide her protégés through branding and public relations processes and help them prepare to pitch to major retailers. Malone left the brand she founded in 2006.

DRESSING THE PRESS: Designer Prabal Gurung got a big endorsement of his brand this week: Oprah Winfrey wears his red gown on one of four covers of the December issue of her magazine, where she posed with daytime talk show peer Ellen DeGeneres. Gurung has watched “The Oprah Winfrey Show” since he lived in India and credits the program with inspiring him to launch his line in New York last February. “When I got a call for this opportunity to dress her for the cover, it was a few weeks before my spring show [in September]. They asked, ‘Can you do this thing in between your shows?’” said Gurung. “And I said, ‘I’ll move heaven and earth to do this!’ It’s an opportunity of a lifetime.” When Winfrey revealed the cover featuring Gurung’s gown on Monday’s program, “I was dying. I was screaming; I was just so excited,” Gurung said. In between screams, the designer posted Facebook status updates. “Dreams do come true y’all. Thank you @Oprah,” read one.

ON SPEC: SPEC Entertainment, the event production agency that puts on runway shows, presentations and parties for fashion clients including Michael Kors, Vera Wang, Marchesa, and Tom Ford, is branching into “front of house” p.r. services. The new department is spearheaded by a new global communications director, Alex Malgouyres, who previously worked in U.S. public relations at Burberry. Malgouyres also serves as the spokesman for SPEC itself. Having worked with Tom Ford since the brand’s launch, SPEC is behind the events around Ford’s film, “A Single Man,” including the New York premiere in early December.