ISN’T IT ROMANTIC: Relationship writing is not exactly synonymous with thoughtful journalism, a point that is not lost on Elise O’Shaughnessy, editor of the new magazine Tango. “It’s a field that’s full of... 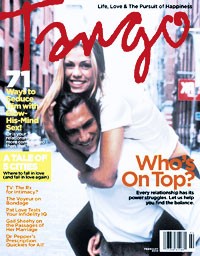 ISN’T IT ROMANTIC: Relationship writing is not exactly synonymous with thoughtful journalism, a point that is not lost on Elise O’Shaughnessy, editor of the new magazine Tango. “It’s a field that’s full of truisms and even, somewhat, dishonesty – people wanting to see things the way they think they should be,” she said. But O’Shaughnessy, who spent five years as executive editor of Vanity Fair, is looking to do something smarter: a magazine that addresses the differences between men and women without resorting to battle-of-the-sexes clichés. In fact, she added, much of the relationship writing worth reading — admittedly a scarce commodity — appears in magazines like Men’s Health and Maxim. Um…Maxim? “Those guys are not apologizing for what they feel,” she said. “In that sense, they’re more honest about it.”

Tango, which debuts in February, is the brainchild of Andrea Miller, a Columbia Business School graduate who spent four years working for pre-scandal Enron in India. For a first-time media entrepreneur, Miller has assembled a seasoned team: Besides O’Shaughnessy, there’s publisher Ellen Abramowitz, former publisher of Seventeen, and creative director Patrick Mitchell, founding designer of Fast Company. She’s also formed partnerships with Newsweek, which will help out with production, and dating Web site Perfectmatch.com. Miller won’t say where her backing comes from, but she already has advertising commitments from Gucci and Liz Lange Maternity. The biggest obstacle may be Time Inc., which is developing a relationship title of its own. Still, despite the notoriously high failure rate for new magazines, the odds on Tango look to be at least as good as those of a first marriage. — Jeff Bercovici

FASHION TUBE: French Elle is extending its brand to television. The fashion weekly will launch daily coverage of Paris Fashion Week on the Paris Premiere cable network starting in October. “The idea is to bring the spirit of Elle to television,” said Veronique Philipponnat, Elle’s editor in chief, who is heading the TV project. “We’ll show the trends and the people, but do it in our own impertinent voice.” To wit: Philipponnat said Ines de la Fressange will co-anchor with her this season. “Each time, we’ll invite a personality to give their own spin to the shows.” Slated to air five times a week four times a year to match the couture and ready-to-wear calendars, Elle’s show roughly replaces Paris Premiere’s old Paris Modes program — headed by Marie-ChrIstiane Marek — which was axed earlier this year. But unlike Marek’s show, which also followed Milan, London and New York, Elle will only cover Paris. — Robert Murphy

SHARE THE WEALTH: Forbes released its annual Forbes 400 list of the richest Americans Thursday night, and overall, the haves of the fashion and beauty world are doing very, very well. Philip Knight of Nike came in at number 22 with $7.8 billion. Leonard Lauder, with a $3.2 billion net worth, was at 55, while Ronald Lauder came in at 102 with $2.1 billion. Ralph Lauren’s $2.7 billion was good enough for a spot at 72. After splitting up their Gap holdings and giving blocks of shares to each of their children, brothers Robert and John Fisher still tied at 165. Meanwhile, Sidney Kimmel of Jones New York, who was on last year’s list, did not make the cut this year. “You had to have $750 million to even be considered for the list this year,” said a Forbes spokeswoman. “[Kimmel’s] overall net worth was up, but he just couldn’t keep pace with the rest of the list.” Among media tycoons, Sumner Redstone was tops with $8.1 billion, good for number 20. S.I. Newhouse Jr. and Donald Newhouse, chairman and president, respectively, of Advance Publications Inc. (parent of WWD), were tied at 25 with $7.0 billion apiece. Just below that was Rupert Murdoch at number 27 with $6.9 billion, and Michael Bloomberg, at 34, with $5 billion. — Sara James

ONE FOR THE LADIES: Men’s Health is often described as the first women’s magazine for men. That would make Women’s Health, which goes on sale Oct. 5, the first women’s magazine for men for women. True to its name, it’s a near-perfect clone of Men’s Health, down to the abs-alicious cover photo (although these abs belong to a woman, pro surfer Holly Beck). The 128-page issue was edited by Kristina M. Johnson, a former executive editor of Teen People who is freelancing for Rodale. It will have a newsstand-only distribution of 450,000, with a follow-up planned for January. Rodale is calling it a test for now, but watch this space: The last Men’s Health spin-off, Best Life, went bimonthly after a single trial issue. — J.B.