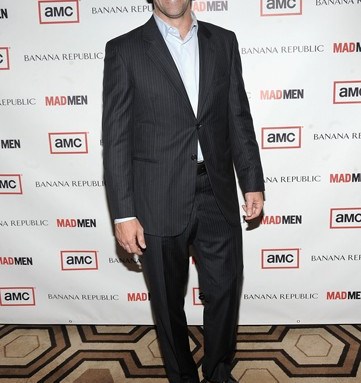 NO IMPERFECTION REVEALED: Be it the critical acclaim and copious marketing budget of “Mad Men,” the retro mystique of his character Don Draper, or let’s face it, Jon Hamm’s chiseled physique and personal charm, the actor is undeniably having a moment. True, he and his co-star were bumped from the cover of Vanity Fair, but the extended Annie Leibovitz shoot made it in, and Hamm has lately been ubiquitous on the talk show and Q&A circuit, dispensing pitch-perfect anecdotes and somehow managing plausible self-deprecation.

All of this inspired Dave Itzkoff to wonder on The New York Times’ ArtsBeat blog Wednesday, “Is Jon Hamm really human or is he an incredibly lifelike cyborg sent to earth from the planet Perfectotron?” On TheAwl.com, Alex Balk complained, “Jon Hamm is ruining it for the rest of us.”

At a Wednesday evening screening of the Season Three premiere episode hosted by Banana Republic, which partnered with the show for window displays in nearly 500 stores, Hamm politely declined to furnish evidence of an imperfection, essentially asking a reporter to take his word for it.

The show’s omnipresence has reached fever pitch — Sesame Street recently said it will parody “Mad Men” — and fashion is happily participating. “I get a lot of e-mails and photos of people that are dressing like me,” said Hamm, meaning his character. “That was pretty strange. People will say to me, ‘Oh, I just saw you in a mall.’”

Is he so easily imitated? “I guess it’s pretty easy,” said Hamm, ever quick to evince modesty. “Slick your hair back, put a nice suit on, and you’re ready to go.”

BUSINESSWEEK SALE SEEN HEATING UP: Media observers are speculating a deal for McGraw-Hill Cos. to sell BusinessWeek could be put together within the next few months. So far, OpenGate Capital, owners of TV Guide, and Warburg Pincus are said to interested, as are Bruce Wasserstein, owner of New York Magazine; Platinum Equity, and Mansueto Ventures, owners of Fast Company. Coincidentally, Fast Company’s former editor in chief, John Byrne, is now at BusinessWeek, serving as executive editor.

Sources say the asking price could be around $35 million to $40 million, plus perhaps the assumption of debt and other obligations. “It is likely that prices that are being offered now will decline between now and closing as buyers learn more about the state of the business and what the actual costs of operating it are,” noted Reed Phillips, managing partner, DeSilva + Phillips. “At this stage in the process, the name of the game is to bid high so that BusinessWeek engages with you as a possible bidder. Then, as you learn more, try to lower the price to more of what the business may actually be worth.” A spokesman for BusinessWeek said Friday the company is exploring its strategic options (as it had noted in a statement last month) but declined to comment further.

DON’T DISS PENNEY’S: Cintra Wilson didn’t know what she was getting herself into when she wrote a scathing column about J.C. Penney’s new Manhattan store in the Styles section of The New York Times on Thursday — and then herself came under intense criticism for it. At the beginning of the piece, she wrote: “Why would this dowdy Middle American entity waddle into Midtown in its big old shorts and flip-flops without even bothering to update its ancient Helvetica Light logo, which for anyone who grew up with the company is encrusted with decades of boring, even traumatically parental, associations?” Wilson went on to say it took a long time to find a size 2 among the racks. “There are, however, abundant size 10’s, 12’s and 16’s.” She added the store had the “most obese mannequins I have ever seen,” adding “they probably need special insulin-based epoxy injections just to make their limbs stay on.”

Wilson told WWD she hadn’t heard from anyone at Penney’s, but the outpouring of abusive comments and personal attacks from others have been “hair-raising.”

“I made some comments about an oversize mannequin that somewhat erased the fine line between humor and offensiveness — and I had to concede that my tone was too harsh when some very nice people wrote to tell me why they were hurt by these comments,” said Wilson. “This is what compelled me to apologize. It was a teachable moment, so I tried to take responsibility for the fact that I wasn’t sensitive enough to people’s feelings in that passage.” She added the “beat down” she received from the vast majority of commenters, though, has been hateful and threatening.

A business writer at the Milwaukee Journal Sentinel saw the piece, and wrote, “We should invite her [Wilson] to the Wisconsin State Fair and force-feed her a cream puff!” Meanwhile, a blogger at the Houston Press responded with an article, “Times Writer Dumps on Texas’ J.C. Penney, Because We’re Just So Damn Fat Here.” Writer Richard Connelly said, “It’s difficult to take in just all the sneering aimed at us corpulent, tasteless slobs between the coasts, but we’ll try.”

“The Critical Shopper column has always had an edge and a point of view — it is supposed to review, after all,” said a spokeswoman for the Times. “Cintra Wilson felt, after the article went to press and after she received some complaints from people who felt offended by what she had written about ‘obese mannequins’ she saw at the store, that she had been less sensitive than she should have been to the feelings of readers who felt that the reference belittled them. She told her editor that she was going to say that on her personal blog. As far as the review itself goes, she stands behind it.”

“It is interesting — if a big frightening — how much rage this article generated,” Wilson added. “It did show me that weight issues in America are far more intensely painful for people than I ever previously realized. This hot button is so freakin’ hot, it is thermonuclear.”

As for whether Penney’s will continue to advertise in the Times — that remains an open question. Penney’s executives could not be reached for comment.

SLOW SALES: The U.K.’s weekly style magazines seem to have the edge on monthly fashion titles in the battle to maintain circulation, according to half-year figures from Britain’s Audit Bureau of Circulations released Thursday. However, hardly any titles managed to grow their circulation significantly during the period.

U.K. weekly Grazia, which is published by Bauer, notched up a 0.7 percent increase in total circulation (which combines subscription, newsstand sales and free distribution) to 228,694 for the six months to the end of June, compared with the same period last year, while Look, a style and celebrity weekly published by IPC Media, saw a 2.6 percent increase to 315,410. More, a young women’s celebrity weekly published by Bauer, posted a 17.3 percent circulation rise to 190,708, after a relaunch last year.

But there were some brighter spots in the monthly market – In Style U.K., published by IPC, saw a 1.2 percent rise year-on-year to 182,989, following last year’s redesign of the magazine and Eilidh MacAskill’s appointment as editor in December. Harper’s Bazaar, published by Natmags, a subsidiary of Hearst, saw a rise of 0.5 percent to 109,646 and U.K. Vanity Fair also rose 0.5 percent to 101,698.

YOUNG LOVE: After putting a naked Beth Ditto on Love magazine’s inaugural cover in February, the title’s editor in chief Katie Grand has turned to the charms of youth for its sophomore edition, which hits newsstands Aug. 24. “The whole issue’s full of these kids, really, who are at that turning point of life when you’ve got no responsibilities, you’re quite free and everything’s exciting,” said Grand.

She’s tapped a mix of emerging celebrities and total unknowns to profile in the magazine, most of whom are under 21. Coco Sumner, the musician daughter of Sting and Trudie Styler, features on one of the issue’s two covers, shot by Mert Alas and Marcus Piggott. A second cover image, shot by David Sims, spotlights Alex Hartley, a bass player from Birmingham, England, whom Grand “found on the Internet.” The issue also features Miley Cyrus, Pixie Geldof, Allegra Versace, Scout and Tallulah Willis and Cooper and Marston Hefner (Hugh Hefner’s sons). Grand also said she’d added “more words” to the second issue of the Condé Nast U.K. title, and has appointed Isaac Lock as deputy editor of the magazine. “I always think visually, so it was really important that the words team was strengthened,” said Grand.

Advertisers in the issue include Louis Vuitton, Prada and Chanel, and there are 106 ad pages in the 296-page magazine. While that’s a small decline from the 116 ad pages in February, Grand said the issue had “exceeded the targets set” for its advertising. “I think it’s tough for everyone, and everyone’s competing for the same ads,” she said. To mark the launch of the second issue, the title will advertise on billboard screens at London’s Shepherd’s Bush roundabout, a major route into the city, which will flash the magazine’s entire content page by page. In addition, T-shirts printed with the two Love cover images will be sold at Marc by Marc Jacobs’ London store. Grand and her team will dress the store’s windows.