Us Weekly's recent cover stories have been fixated on what it characterizes as the definitive split between Nick Lachey and Jessica Simpson. 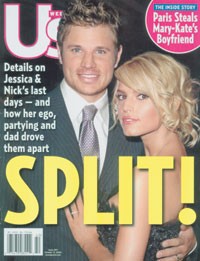 JUST LIKE US: Us Weekly’s recent cover stories have been fixated on what it characterizes as the definitive split between Nick Lachey and Jessica Simpson. But now the magazine might not be so sure.

Earlier this week, Us’ West Coast executive editor, Ken Baker, said on Ryan Seacrest‘s radio show, “This is a couple that just will separate at every opportunity, and I just have to say that whoever is going to finally get to the bottom of these guys, to get them to step up and say what’s happening, to tell the truth, there’s really going to be an interesting story for them to tell.”

So clearly, Us hasn’t told it yet.

In fact, Us’ three most recent covers almost make more sense if you read them in reverse. In the issue dated Oct. 17, it used the cover line “Split!” while inside, a photo of the couple was shown with the magazine’s signature illustrated rip running through it. “It’s Over! The bitter back story behind Simpson and Lachey’s final decision to separate,” the story read.

At that point, it seemed like the fate of the Simpson-Lachey union was sealed.

But since then, Lachey and Simpson have gone to Europe and put their wedding rings back on, while their publicists have issued joint statements denying any rift. Us’ two subsequent cover stories since Oct. 17 have maintained the marriage is over, claiming the pair’s public appearances together are all a publicity hoax orchestrated by Simpson’s father, Joe. However, there are no more ripped photos of the couple in its pages.

Sources at rival celebrity weeklies believe Us overplayed its hand with the Oct. 17 cover story and has since been trying to save face. Us, they said, might be attempting to move forward a story that simply won’t budge for a variety of reasons. Lori Majewski, who recently left Us to edit Teen People, was said to be one of the weekly’s main ties to the Simpson camp. Simpson’s cozy deal with OK magazine also is said to be irking editors at Us and perhaps stymieing the magazine’s reporters from getting to the bottom of the story.

This story first appeared in the October 21, 2005 issue of WWD. Subscribe Today.

An Us spokeswoman declined to comment, but Simpson’s spokesman, Brad Cafarelli, told WWD in an e-mail, “In spite of our constant denials and attempts to refute their misinformation, Us and other weeklies insist upon publishing hurtful gossip and lies about Jessica and Nick. Hopefully, the public can distinguish the difference between the soap operas these publications come up with every week and the truth.”

In any case, the barrage of coverage may end up hurting Us more than it helps since the public appears to be losing interest. According to two competitors’ early scan data, the first Nick and Jessica cover sold more than one million copies on the newsstand, but the second sold below average, at just more than 790,000 copies.
— Sara James and Jeff Bercovici