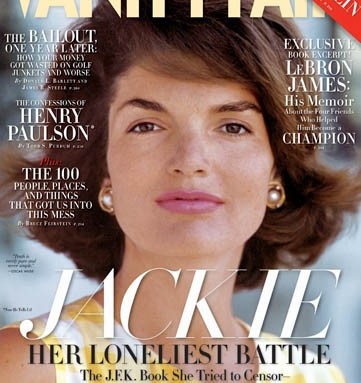 VF’S KENNEDY MYSTIQUE: If you’re wondering why Jacqueline Kennedy is on the cover of the October Vanity Fair — just after the death of her onetime brother-in-law Sen. Edward Kennedy, inconveniently timed for a monthly — it’s useful to remember that a Kennedy cover is now an annual tradition at the magazine, for the simple reason that it usually works.

In November 2007, “Unseen Camelot,” a package led by a Richard Avedon cover shot of John F. Kennedy and his wife, was that year’s best performer on the newsstand, with 459,169 copies sold, more than 100,000 more than the same month the year before. The Robert F. Kennedy cover in June 2008 was also a top seller, with 445,048 single-copy sales, but given that RFK shared the issue with a notorious shot of Miley Cyrus, it’s hard to determine which drew more readers.

Vanity Fair has a page on its site that compiles the nearly two dozen Kennedy features it has run in the magazine and online since 1999, many of them book excerpts.

“It’s a combination of their general attractiveness, their charm and their accomplishments,” said Vanity Fair editor in chief Graydon Carter of the Kennedys’ appeal for his magazine. “And for us at Vanity Fair, there is their central position in the last half of the last century — a period we have an ongoing interest in.”

Maybe it’s not just the Kennedys. In a fast-moving, fickle and overloaded entertainment landscape, few stars have as much enduring claim on the public’s imagination as dead ones from a less-cluttered past. In 2008, a Kennedy consort and fellow claimant for the nostalgia buy was Marilyn Monroe, who sold 476,937 copies of the October 2008 issue, second that year only to Angelina Jolie. The Monroe story, like this month’s Kennedy story, was written by Sam Kashner.

The more recent dead have also been cover favorites. The covers of the last two issues have been devoted to three dead people: Michael Jackson and Farrah Fawcett on September’s, Heath Ledger on August’s. Their sales figures are not yet available.

PARIS LOVES THE FIRST AMENDMENT: An unlikely phrase entered into the official record of the U.S. Court of Appeals’ Ninth District in California on Monday: “famous for being famous.” Circuit Judge Diarmuid O’Scannlain had correctly applied the descriptor to its flag bearer, Paris Hilton, on page two of an opinion, which allows the heiress to continue with a lawsuit against Hallmark Cards Inc. But the talk show punchline material was still jarring tucked amongst the legalese typical of such documents. The ruling stemmed from a suit Hilton filed in September 2007 in U.S. District Court in California that alleged the greeting card giant had used her likeness and catchphrase, “That’s hot,” on a card without her permission. Kansas City, Mo.-based Hallmark moved to have the case dismissed in the lower court, but was denied. The sides argued an appeal in front of a three-judge panel in the circuit court in May. The greeting card firm had argued it had a First Amendment right to use the image. The court rejected its argument, in part, because the card did not “publish or report information.” The case will now return to the lower court in Los Angeles. “No one is free to trade on another person’s name and appearance, and Ms. Hilton is confident that she will prevail on her claims against Hallmark,” Brent Blakely, a lawyer for Hilton, wrote in an e-mail Tuesday.

GLAMOUR’S PICK: Glamour magazine never reveals its Women of the Year award winners before its annual event in November, but insiders told WWD one of this year’s winners may be a surprise to some given her recent legal imbroglios: Rihanna, who has recently made headlines as much for her tempestuous relationship with Chris Brown, who was found guilty of assaulting her, as for her singing. The event, which will be held Nov. 9 at Carnegie Hall, celebrates inspiring, high-achieving women. Last year’s winners included Nicole Kidman, Tyra Banks, Maureen Chiquet, Hillary Clinton and Condoleezza Rice.

Meanwhile, the magazine also is plotting its Fashion Gives Back initiative and has tapped Jason Wu, Alejandro Ingelmo, Pamela Love, Brian Reyes, Bensoni and Abigail Lorick of Lorick to design a limited edition shopping tote, proceeds from which will benefit dress For Success. Wu’s bag features gradient lines that darken to black, while Bensoni’s depicts oversize lipstick kiss marks in bright colors. Each bag incorporates the designer’s signature. The bags sell for $35 and will be sold exclusively at Bloomingdale’s and bloomingdales.com starting this week. The bags, along with 900 copies of Glamour’s October issue — which hits stands Sept 8. —will be featured in the windows of Bloomingdale’s 59th Street flagship in New York.

The October issue has a feature on Fashion Gives Back with profiles of the participating designers alongside a celebrities such as Jessica Szohr, America Fererra and Lily Collins. Past Fashion Gives Back Designers include Marchesa, Doo.Ri and Rachel Roy.

SEPTEMBER ON DISPLAY: It’s not just Vogue’s September issue that’s getting all of the attention these days. The Royalton Hotel in New York will host an art exhibit including the September issues of the biggest fashion titles. The exhibit began Monday and runs through Sept. 17, during which the hotel will display large blowups of the September covers of Vogue, W, Harper’s Bazaar, Elle, In Style, Marie Claire, Interview, Glamour, V, Nylon and Lucky in its lobby. Additionally, a few hundred copies of each titles will be available for hotel visitors during that time.

FRENCH ACCENT: Weekly fashion magazine Grazia made its long-awaited debut on French newsstands over the weekend, increasing pressure on rival Elle, which so far has dominated the market for weeklies targeting thirtysomething women. France is the 13th country to get a version of the Mondadori title, which was first published in Italy in 1938. However, the French edition appears to have been inspired by the successful British version, which has stolen readers from traditional fashion glossies and gossip magazines alike, rather than by the more traditional Italian Grazia.

With Kate Moss on the cover, the first French issue has 180 pages, including 56 pages of advertising ranging from luxury brands Gucci, Louis Vuitton and Tod’s to Levi’s and Ikks sportswear. Content is split into 35 percent news, 10 percent celebrity updates, 45 percent fashion and beauty, and 10 percent lifestyle and culture articles. The promotional price of 1 euro, or $1.43 at current exchange, is likely to rise to “around 2 euros,” or $2.86, according to Mondadori, bringing it in line with that of Elle. No celebrities are expected on the cover of the second issue, which will be devoted to fall fashion, a Mondadori spokeswoman said.

WALLPAPER’S GUEST STARS: Wallpaper has marked the third year of its guest edited series by asking Karl Lagerfeld and Philippe Starck to each create covers and editorial for the magazine’s October issue. And both newbie editors have eschewed the idea of a regular, two-dimensional magazine cover. While Lagerfeld has shot his current muse, Baptiste Giabiconi, clad in a Dior Homme suit for his cover, he’s added a layer of paper to the magazine, which those inclined can peel off to reveal Giabiconi naked. Lagerfeld has also shot a 27-page editorial for the title featuring Giabiconi in locales such as the Queen’s Theater in Versailles.

Starck, meanwhile, has designed a cover made of three layers of translucent paper, featuring an amoeba, a monkey wearing shoes and a question mark, to depict what he sees as the different stages of evolution. His editorial also takes a cerebral approach, featuring interviews with scientists, physicists, cosmologists and artists. Starck said he’s approached his editorship with “a mission to make intelligence sexy.” Both Starck and Lagerfeld’s editorial will appear in all editions of the magazine, not just those with their respective covers.

“Like their illustrious predecessors, Lagerfeld and Starck have made full use of their prime piece of Wallpaper real estate,” said Tony Chambers, editor-in-chief of Wallpaper. “Their covers have pushed the boundaries of magazine design and production.”

ROY GETS TECH SAVVY: Rachel Roy is partnering with Vogue magazine for an iPhone initiative, which will mark the launch of several of new Roy’s projects. Beginning Tuesday, iPhone users who visit an interactive Web site, M.rachelroy.com, can check out a fall look book from the new Rachel Rachel Roy collection, sold exclusively at Macy’s stores; view three episodes from a documentary, produced by Vogue.TV, featuring scenes from Roy’s life, and enter a contest to win looks from the newly launched collection.

“I really wanted to appeal to my customer by creating a modern, interactive space where girls who love their iPhones could interact with the Rachel Roy brand from anywhere, anytime,” Roy said.