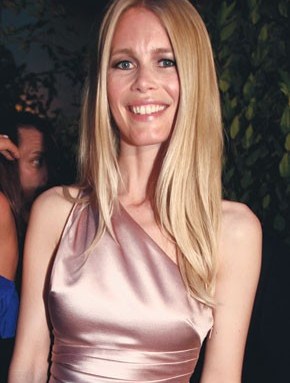 L’UOMO VOGUE TURNS 40: Vogue Italia editor in chief Franca Sozzani rolled out the red carpet for a party at Palazzo Litta on a balmy night in Milan Sunday to fete 40 years of L’Uomo Vogue and the glitterati came out in force. “It’s been 40 years of collaboration,” said Giorgio Armani, who was joined by a host of designers and fashion folk, including Eva and Roberto Cavalli, Diego Della Valle, Alessandra Facchinetti, Ferruccio Ferragamo, Alberta and Massimo Ferretti, Tom Ford, Angela Missoni, Robert Polet, Renzo Rosso, Donatella Versace, Vivienne Westwood and Anna Wintour. “I feel like L’Uomo Vogue is where I started,” said Yves Saint Laurent creative director Stefano Pilati, who flew in for the event. “I’m [very pleased] about everything,” Frida Giannini said. With Italy playing Spain in the quarterfinals of the European soccer championships, a room off the main courtyard was set aside for viewing, much to the relief of Santo Versace.

“Where are the big screens for the soccer?” he gasped as he entered the party. Tommaso Aquilano and Roberto Rimondi of 6267 had other things on their minds, after signing for Ferré in April. “We are still working on the Ferré women’s collection so we’ll still have our grand debut to come,” Aquilano said. Stars of the other big screen also put in an appearance, as did singer Janet Jackson and Naomi Campbell, Eva Herzigova and Claudia Schiffer. “I’m here to live it up,” said Adrien Brody. Not so for Tilda Swinton, wearing YSL, who is currently filming “Io Sono l’Amore” with Italian director Luca Guadagnino. “I have to get up at 5 a.m. tomorrow so I’ll be going to bed early tonight. We’re filming in San Remo, which is three-and-a-half hours away,” Swinton said. John Malkovich dropped in after some “meetings” in Milan and seemed to be suffering from the heat. “Am I an icon? I’m not so sure,” Malkovich said, wearing a beige linen suit. “It’s mine,” he said of the suit. “At least I hope so. It was in my closet.”

Gerard Butler was handling the temperature better. “I’m just about bearing up,” Butler said. “I’ve been doing a load of photo shoots so I’ve had a lot of stuff on. It’s difficult for a Scots boy like me.” Butler was heading to Scotland on Tuesday en route back to his adopted home, America. “I’m actually off to the Highlands for a while to breathe some fresh air,” he said.
— Andrew Roberts

COVER TURN: While presidential candidate Barack Obama has appeared on the cover of several men’s fashion magazines — Men’s Vogue, GQ and Esquire included — could Michelle Obama’s turn as a cover star be next? Sources said the potential first lady was shot last week at Industria Studios in New York for a possible cover for Essence. Obama was in New York last week for a number of appearances, including a benefit and private dinner thrown by André Leon Talley, Anna Wintour, Shelby Bryan and Calvin Klein and her much-covered gig co-hosting “The View.” A spokeswoman for Michelle Obama did not return an e-mail for comment by press time, and a spokeswoman for Essence could not confirm or deny that Michelle Obama was photographed for the magazine. — Stephanie D. Smith

THE WINNING NEWS: When it came to winning this year’s Mirror Awards, given out by Syracuse University’s Newhouse School for excellence in media industry reporting, it helped, as it often seems to, to have “New York” somewhere in your publication name. The New Yorker’s Ken Auletta won for coverage of Rupert Murdoch’s purchase of Dow Jones, New York magazine won for a profile by Jeff Coplon of The New York Times’ former managing editor Gerald Boyd, and The New York Times itself won twice, for overall excellence in its Monday media section and for Joe Nocera’s business columns. Frontline also took home a prize for best investigative piece for its two specials on the future of news.

Tim Russert had been named winner of a lifetime achievement award well before his death on June 13, so the tribute video of his friends and colleagues was particularly poignant. NBC anchor Brian Williams accepted in his stead, having noted in the video that it was Russert’s idea to have the First Amendment etched outside the new Newseum. He disputed the idea that “the king has died, thus we must mourn the passing of the kingdom….Will we see his kind again? No. Will we practice his kind of journalism again? Yes.”
— Irin Carmon

PIERRE REMEMBERS: The most personal tribute yet to the late Yves Saint Laurent hits French newsstands Wednesday. Têtu, the gay and lesbian magazine directed by Pierre Bergé, offers an exclusive homage from Bergé, Saint Laurent’s former lover and business partner. Called “Yves Saint Laurent: Une histoire d’amour,” the magazine’s cover shows the designer in a maillot on a beach in Greece, taken by Bergé in 1964. The 48-page spread includes other never-published photos of Saint Laurent in private and in public; sporting a cap and shades in 1967, in Marrakech in 1969, sharing a joke with Bergé and Loulou de la Falaise in 1986. There’s even a photo with Karl Lagerfeld.

Bergé’s one-page editorial relates their meeting and makes passing mention of difficult times due to Saint Laurent’s nervous depression, alcohol and drugs. “I helped him to overcome his fears and if one day, we decided to live separately, we never separated,” Bergé writes. “We shared everything, anxieties, hopes, joys but also houses, paintings, objects of art. Sometimes lovers.” Bergé refers to the couple’s decision to be united in France’s civil union, or PACS, as a “logical progression.” He also divulges that he and close friends chose not to tell Saint Laurent he was suffering from an incurable brain tumor. Recalling the designer’s pride in renovating the Jardin Majorelle in Marrakech, Bergé concludes; “One must be wary of shy people, they are the most forceful.” — Ellen Groves