Ed Kosner's memoir doesn't come out until September, but staffers at the New York Daily News who have seen galleys are already buzzing about the book's unsparing portrayal of their owner, Mort Zuckerman. 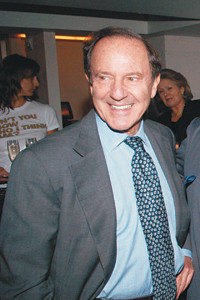 LE PETTY MORT: Ed Kosner’s memoir doesn’t come out until September, but staffers at the New York Daily News who have seen galleys are already buzzing about the book’s unsparing portrayal of their owner, Mort Zuckerman. A former top editor of Newsweek, New York and Esquire, Kosner ran the Daily News from 2000 to 2003. In his memoir, “It’s News to Me: The Making and Unmaking of an Editor,” Kosner depicts Zuckerman as a “notorious screamer” who “nickel-and-dimed his editors” and “ran the paper like a corner candy store.”

And that’s not all. In Kosner’s rendering, Zuckerman comes across as a habitual dissembler who assures his employees their jobs are safe even as he’s lining up their replacements, and leaks their firings to other papers. In one passage, Kosner describes negotiating with Zuckerman to become editor. “Making a contract with Mort was…excruciating,” he writes. “Every time we seemed near agreement, he’d try to insert some impossible clause or undercut some ironclad guarantee.” It finally reached the point, Kosner adds, that his wife ordered Zuckerman, “Stop acting like a son of a bitch.”

Predictably, Kosner portrays Zuckerman as unpopular with his underlings. “Mort hardly ever appeared in the newsroom lest some disgruntled staffer let him have it,” he writes. By July 2003, Kosner hadn’t quite had enough, but he sensed Zuckerman was on the verge of shoving him out anyway. Not long after he informed Zuckerman of his intention to retire, the New York Observer reported that Martin Dunn had been hired to replace him. “Typically, Zuckerman himself never told me about Dunn,” he writes. “I’ll always be grateful to Zuckerman for bringing me back to journalism after my Esquire failure, but he turned out to be the most peculiar — and in many ways the worst — owner I ever worked for.”

Zuckerman’s rough treatment is all the more striking when contrasted with the largely admiring portrait Kosner paints of Rupert Murdoch, who owned New York during part of Kosner’s tenure there. “Murdoch’s version of spin is to talk plainly,” he writes. “All I know is, the more pressure Murdoch fell under, the more grace he showed.”

This story first appeared in the May 19, 2006 issue of WWD. Subscribe Today.

As owner of the New York Post and a political conservative, Murdoch is, of course, Zuckerman’s foremost rival — and an object of his envy, suggests Kosner. “Mort would sneer at Rupert’s paper and insist he wanted nothing like it, but most of his specific directives and criticisms pointed inescapably that way,” he writes.

A spokesman for Zuckerman took issue with several of Kosner’s claims, including his assertion that Zuckerman “micromanag[ed] the payroll.” “Over the course of a successful 44-year career in a transaction-oriented world, it’s inevitable that you’ll upset some people and get upset with others,” he said. As for the insinuation that Zuckerman desires the News to be more like the Post, the spokesman jabbed, “No, Mort actually prefers his paper to be profitable.”
— Jeff Bercovici

SHE’S SO ELLE: Elle has shaved a few bucks off its modeling fees for the year. A well fashion story in the June issue features not a professional mannequin, but Elle’s own style director, Isabel Dupré, who appears pouting on a beach, pouting on a rock, pouting in the desert with an SUV and pouting on her knees in a tidal pool, playing with what looks to be a sea urchin. According to an Elle source, casting the sultry, fortyish Dupré was the idea of international creative director Gilles Bensimon, who also shot her for the magazine. Other titles such as Shop Etc., Lucky and Domino use head shots of staffers next to their fashion, beauty and home picks, but the prominent, six-page Elle story took the trend one further.

Did Dupré, though, perhaps find it hard to style her own shoot? Although the story was intended to show readers how to layer the season’s clothes and accessories, in all six frames, she wore a virtually identical tangle of necklaces, and in five of them, she had on the same ceramic Chanel watch.

“The editors thought it was perfectly suitable,” said an Elle spokeswoman. “[Editor in chief] Robbie [Myers] likes to focus on real woman. Isabel is also a style setter. What she wears shows up on the runway. She has an enormous following. Bill Cunningham [photographer for The New York Times] did a piece a few years ago on [her] because she showed up so many times in his photo column.”

Ah, but was she wearing the same Virgins Saints & Angels necklace in every picture?
— Sara James

The bacchanalia continued into Thursday when In Style publisher Lynette Harrison had cocktails for June cover girl Heidi Klum on the roof at 60 Thompson. And you thought you had a long week.
— S.J.