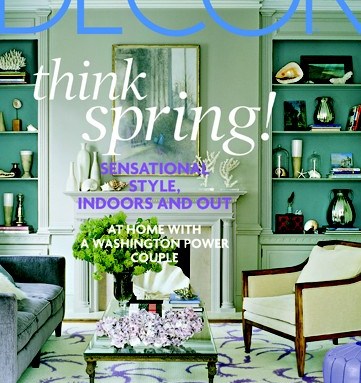 HOME COOKED: After the deaths of Domino, Country Home, Home, Cottage Living, House & Garden and Blueprint, and the exits of brand extensions like O at Home and Vogue Living, what’s left for shelter magazines?

This particular recession offers a brutal paradox for the category: People may be nesting, but the same housing bubble that enriched these magazines and grew the category in the first place also helped trigger the crisis. Moreover, the luxury-oriented titles that positioned themselves as style books no longer have a chance to pick up pages from increasingly parsimonious fashion advertisers. And print magazines in general are disadvantaged by a three-month lead time in an economic moment when advertisers are nervously making short-term decisions.

It’s no wonder the remaining titles are seeing at least 25 percent declines so far this year, from an already tougher 2008, the category’s shrink notwithstanding. “Most advertisers had reduced their schedules so much in [the now-defunct magazines] that whatever was left over wasn’t translated to the rest of the titles,” said Deborah Burns, chief brand officer of Hachette’s Luxury Design Group.

That company’s strategy has been to fold the middle-market Home and put Burns in charge of both Metropolitan Home and Elle Decor, doubling down on niche and luxury. “The luxury consumer is still the only consumer really spending, even though their spending is off,” Burns argued. “For us, in this period of time, share growth has been tremendous.” Year to date through April, Elle Decor was down 22 percent, to 253 pages, and Metropolitan Home was down 27 percent, to 190 pages.

House Beautiful, the oldest title in the category, has pursued a different tack: It’s widely diversifying its ad base, with 70 percent of its brands this year so far being new to the publication. That means the presence of mass brands like Hellmann’s mayonnaise, Iams cat food and Wal-Mart alongside the magazine’s several-year focus on color and the paint accounts that come with it. Publisher Kate Kelly Smith described it as meeting the reader where she is. Year to date through April, the magazine had 166 ad pages, down 23 percent.

The Hearst title has also been looking to the beauty industry to make up for the pages lost by the housing crunch, with recent buys from Olay, Clairol and L’Oréal. It’s not alone in lifestyle titles in looking to beauty: Coastal Living, a Time Inc. title with a new editor, M. Lindsay Bierman, was recently redesigned to include two beauty-product oriented columns, and picked up Aveeno and Neutrogena pages for its trouble.

Arguably the toughest spot in the category right now belongs to Architectural Digest, traditionally the biggest of the high-end books. It was down precipitously through April: almost 50 percent, to 270 pages year to date. Publisher Giulio Capua attributed the drop to half of AD’s business being in nonendemic luxury lifestyle — automotive, travel, finance — where spending is seriously crimped. The other half is from the home trade, often made up of small businesses that are seeing their lines of credit cut back, rendering advertising a low-priority, controllable expense.

Like many magazines, AD continues to turn to additional partnerships with its advertisers, offering the kind of added value programs that are common for corporate parent Condé Nast (which also owns WWD). The company is said to never discount off the rate card, even as others admit to negotiating in hard times, but competitors claim all the extras cut into profitability anyway. Still, some of the programs, like the recent Architectural Digest Home Design show, can offer alternative revenue streams.

Even though Capua said the magazine sometimes mixed price points in its credits — he mentioned the rather un-Target-like Restoration Hardware — he stressed the magazine won’t diverge much from its aspirational roots. “We don’t do design on a dime,” he said. “Our mission and our position would become fuzzy and unclear.”

Several media buyers and publishers said they’re seeing an equally or more brutal second quarter, but expressed cautious optimism for the second half. Melissa Gordon, senior vice president and group account director at Initiative, pointed to relative signs of life in the housing market and mortgage rates being at an all time low. “The reality is, it was a pretty saturated category, where some were successful and some were doomed, but home life is going to continue to be important to the consumer,” she said.

AD’s Capua pointed out the Home Design show had 350 exhibitors, 100 more than last year, and its trade day/VIP attendance was up 47 percent. “From the fourth quarter to just recently, the mood was, ‘figure out how to survive,’” he said. “In the last four weeks, the tone has improved, and people are coming back to showrooms.” — Irin Carmon

MADE IN MALIBU: It was just last year when Op relaunched exclusively at Wal-Mart with a star-studded ad campaign featuring Rumer Willis, Kristin Cavallari, Christina Milian, Josie Maran, Pete Wentz, Corbin Bleu and Wilmer Valderrama. This season, the Iconix Brand Group-owned junior and young men’s brand has sparked a new lineup of fresh faces for what the company calls the “Summer of Music” spring campaign.

The new ads feature AnnaLynne McCord, Sophia Bush, Solange Knowles, Joel Madden, Brody Jenner, Cody Linley and Bow Wow in what was quite the production to shoot. In order to get the cast into summer concert mode, the company produced a live Good Charlotte concert on Westward Beach in Malibu, Calif., as a backdrop for the shoot. The result is a bunch of images capturing the Op cast of celebrities enjoying their time at the concert, riding bikes and skateboarding at the beach.

“We had this great product that was supported by a really big marketing push, which proved to be really successful for the brand and for Wal-Mart,” said Dari Marder, chief marketing officer at Iconix. “Everything we do on the marketing end is done in order to translate into sales, and we really saw that happen with the relaunch of Op. This season is all about getting a new, diverse group of stars in order to anniversary the success of the launch.” The ads will launch this month in issues of fashion, lifestyle and entertainment magazines, as well as on billboards and on op.com. — Julee Kaplan

THE PRINTED WORD: Reports of the death of Nylon magazine’s print edition have been greatly exaggerated. On Monday, online sites including Missbehavemag, Jezebel and Gawker posted items about the indie fashion magazine replacing all subscribers’ print editions with an online digital version, referencing an e-mail sent by Nylon president Don Hellinger. In fact, the e-mail only went to a small number of readers who had picked up free subscriptions as a gift-with-purchase this past holiday at Urban Outfitters stores. The e-mail offered that group the choice between a digital and print edition via a toll-free number. “Every single paid subscriber will continue to receive the print magazine,” said Jaclynn Jarrett, publisher of the 225,000 rate base title. “Every initiative we do goes back to the print magazine. It’s the core of our business and it’s not going anywhere.”

Nylon last week celebrated its 10th anniversary with a packed shindig at the Thompson LES hotel in New York, attended by Taylor Momsen, Alexis Bledel, Ciara, Amber Tamblyn, Kat DeLuna, Lydia Hearst and an army of downtown hipsters. This May it will kick off its second annual Nylon music tour hitting 20 cities with sponsors PacSun and Roxy. — David Lipke