Memo Pad: Let’s Make A Deal… Him Again… Calm Before the Storm?…

Ron Burkle and American Media Inc.'s David Pecker are said to be meeting with banks to finalize the financing for Source Interlink Co... 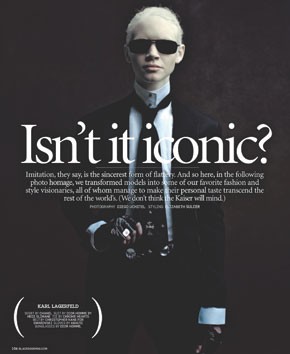 LET’S MAKE A DEAL: Ron Burkle and American Media Inc.’s David Pecker are said to be meeting with banks to finalize the financing for Source Interlink Co., controlled by Burkle-owned Yucaipa Cos., to acquire AMI. So what would the allegedly press-shy Burkle want with Shape, Star, the National Enquirer and Men’s Fitness? Well, perhaps not a lot. His interest appears mainly to be in AMI’s magazine distribution company DSI, the purchase of which would make Source Interlink one of the largest magazine distributors in the country. Sources close to the deal expect Pecker to become head of the new company, despite a very rough patch over the last few years that included falling rate bases and restated financials at AMI.

Yucaipa in May acquired Primedia’s Enthusiast Group for about $1.2 billion, expanding Burkle’s publishing footprint to include Motor Trend, Hot Rod and Soap Opera Digest (Burkle is also believed to be an investor in pop culture monthly Radar). Sources say Burkle has made few changes to the management structure at Primedia, where Steve Parr still serves as president, and was waiting until a deal with AMI was finalized before shuffling around the top brass at Burkle’s new media holdings. Negotiations between Burkle and AMI slowed this summer while AMI caught up on reporting its financials to the Securities and Exchange Commission, part of the ongoing drama at the beleaguered tabloid publisher. Its numbers are now up-to-date — for the first quarter of 2007, which AMI released in October, it saw a 5.6 percent growth in revenues, to $122 million, but a net loss of $123,000. — Stephanie D. Smith

HIM AGAIN: Never one to give up his 15 minutes, Kevin Federline is a tabloid cover regular, and this fall there was the arty aberration of L’Officiel Hommes’ cover. Now the former Mr. Britney Spears is on the December cover of Details, shot by Steven Klein and out in a few weeks, according to a source. (For the confused who think the December issue is the one on the stands with Jonathan Rhys Meyers on the cover — surprise — that’s the “Holiday” issue.) It’ll be Federline’s second time on the cover: in March 2005, editor in chief Dan Peres did the Q&A himself and was joined for part of it by Spears. Those were the days of evident domestic bliss: “S–t, I could go on forever about my love for this girl…I could be sitting at home doing nothing, I could be playing f–king video games. She’s more proud of me than anyone has ever, ever, ever been in my lifetime,” Federline said then, going on to test that very theory — apparently unsuccessfully. Despite his candor, Federline wasn’t a particularly good seller for Details in 2005: at 61,179 on the newsstand, it was the second worst-selling issue of the year, though that was flat compared with the same month in 2004. A spokeswoman for the magazine declined to comment on the cover or who did the interview. — Irin Carmon

CALM BEFORE THE STORM?: Time Inc. isn’t going anywhere, at least, for now. Jeff Bewkes, the newly elected chief executive officer of Time Warner, acknowledged during Wednesday’s third-quarter earnings call that there are questions surrounding the company’s future. However, he firmly told analysts, “We’re not going to telegraph our decisions in advance.” As for the publishing division’s performance as of Sept. 30, total revenues of $1.2 billion for the quarter were flat, despite a decrease in domestic print ad revenues (which included the impact of closing Life and Teen People). Operating income increased 13 percent to $251 million. Time Inc. represents approximately 10 percent of the group’s overall business. — Amy Wicks

GORE’S WAVELENGTH: Al Gore, chairman at Current TV, apparently hasn’t been thinking about the TV writers and screenwriters strike — even though it could affect his daughter. Exiting Tribeca Cinemas Tuesday, Gore said, “I really haven’t thought about it,” when asked what, if any, advantage Current TV could have during the strike, since some of its programming is viewer-created content, or VC2 in the parlance of the two-year-old, independent network. As he scurried away for a quick photo op and hopped into a getaway SUV, Gore gave a little shout-out to family values, saying, “My daughter’s a writer on the West Coast.”

The former vice president flew into New York Tuesday from London to speak with emerging nonfiction filmmakers (and some well-known ones, like Albert Maysles), during a one-day symposium, “A Day of Dialogue: The Future of Non-Fiction Film,” held by Fader Films, the film production unit of Fader Magazine, and Current TV. Gore appeared in part to encourage submission to his network’s TV programming and Web site, and in doing so bemoaned the state of television. “The first time most Americans got most of their civic information on TV rather than in print was in 1962,” Gore said. “But now, most of what’s on TV isn’t bubbling up from America’s citizens — it’s designed to sell advertising.” Not that Current TV itself refrains from carrying commercials, including spots from Levi’s. — Valerie Seckler

JUMPIN’ JACK FLASH: A bus boy from Akron, Ohio, is taking his unusual talent of jumping over cars, hurdle-style, straight into a Nike commercial. Thanks to Ellen DeGeneres, 22-year-old Chris Bryant is on the fast track to fame, following in the paths of Lance Armstrong and LeBron James by starring in a Just Do It commercial. Bryant was recently a guest on “The Ellen DeGeneres Show,” displaying his jumping ability, and DeGeneres was so impressed she called Nike chief executive officer Mark Parker. Now, Nike plans to fly Bryant out to California to shoot the commercial and he will also design his own signature shoe. “I’ve never heard of anything like this before at Nike,” said the spokesman. “He’s been inspirational to a lot of people.” — A.W.