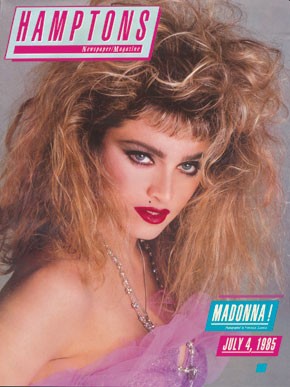 LOOKING BACK: No magazine anniversary would be complete without a look back at the best and worst of times — and couples and fashions, for that matter — covered in its pages. While Esquire preps for its 75th anniversary in October, Hamptons magazine will celebrate 30 years in publication in this week’s issue with a retrospective package. The issue includes iconic covers (Angelina Jolie, June 2000; Madonna, 1985), news stories and big events (publicist Lizzie Grubman ramming her SUV over patrons at Conscience Point) and trends that kept the beach dwellers in and out of fashion — jellies, Shetland sweaters, Tae Bo, the “Rachel” haircut. Hamptons, which Niche Media chief executive officer Jason Binn purchased in 1999 from founder and former partner Randy Schindler, also pays tribute to Hamptonite couples that have kept gossip pages buzzing for three decades — Jane and Jann Wenner, Donna Hanover and Rudy Giuliani, Kelly and Calvin Klein and Beverly Johnson and Chris Noth (seriously?). The issue hit newsstands Friday. — Stephanie D. Smith

NAOMI POLICE DATE NEARS: Naomi Campbell is set to return to London’s Heathrow police station by the end of this month, to hear whether she will be charged after allegedly assaulting a police officer on board a British Airways plane at Heathrow airport in April. Campbell was arrested following the incident April 3, and taken to Heathrow police station, where she was bailed out to return at a date in late May.

Following reports in the British press over the weekend that Campbell is set to be charged with assaulting a police officer after her arrest, a spokesman for London’s Metropolitan Police described the reports as “press speculation” Monday. “[She] will come back to the station in late May, there’s no specific date,” said the spokesman. He added that alongside the option of Campbell being charged, “she could be bailed [again], released with no further charges, cautioned, or issued with a fixed penalty.”

A spokeswoman for Campbell could not be reached for comment Monday. — Nina Jones

SNAPPING THE MOMENT: GQ design director Fred Woodward dug into the crates for his photography exhibit in Chelsea’s 401 projects, “Going Over Home,” a series culled from images that accompanied a 1986 story by Nick Lemann for The Atlantic Monthly. The story, “The Origins of the Underclass,” profiled the culture of the Robert Taylor housing projects on the South Side of Chicago and their connection to a small town in Mississippi. Woodward, who was also the longtime art director of Rolling Stone, snapped photos of the community in both locations, including some photos inside Chicago’s Greater Tabernacle Missionary Baptist Church. Only a handful of the photographs ended up in the magazine (The Atlantic did not run photographs at the time; Lemann’s story broke with tradition). But after hearing a discussion of Sen. Barack Obama and his relationship with controversial Rev. Jeremiah Wright, in which part of the assessment was that many Americans’ perspectives came without having been inside an African-American church, Woodward pulled the series of photos to frame his first gallery show, including images of animated pastor Rev. J.B. Simms, and the spirited patrons in the crowd. “The memories are pretty strong,” said Woodward. “You feel the passion of the hour. I feel that you see [the service] as a participatory act. I grew up where you sat in the pew and listened to what the preacher said. Maybe you sang a hymn or two. But I wasn’t that moved, I didn’t feel it quite like that.” The exhibit will be on view until July 13. — S.D.S.

STARWORKS GROWS IN LONDON: Starworks, the publicity and brand management firm, is expanding its London operations. The firm has appointed Nicki Bidder as London managing director and Amie Witton-Wallace as London communications director, both effective June 2. Bidder and Witton-Wallace will report to James Grant, chief executive of Starworks. Prior to joining Starworks, Bidder was editor in chief of London-based magazine Dazed & Confused for eight years, while Witton-Wallace served as worldwide public relations director of Alexander McQueen for 12 years before starting her own p.r. consultancy. Witton-Wallace will bring her current clients, Jonathan Kelsey, David Morris and Topshop, to Starworks. The company will work with those brands on special projects, and Topshop will maintain its in-house press office. Together with Jane Hanrahan, founder and partner in Starworks London, Bidder and Witton-Wallace will oversee all of Starworks’ London services, which include p.r., casting, VIP dressing and event production. — N.J.