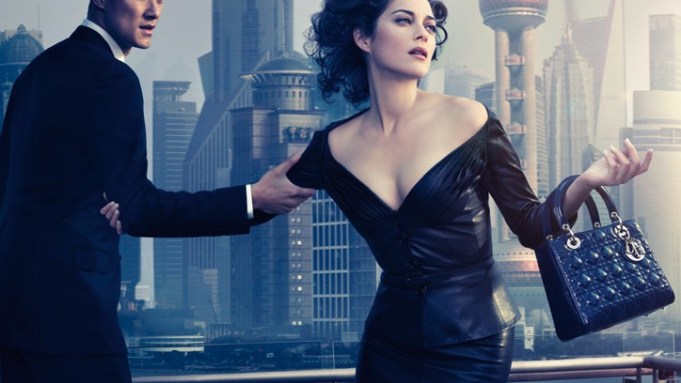 SHANGHAI HIGH: Thanks to Christian Dior, Marion Cotillard keeps racking up those frequent-flier miles. The latest print campaign for the ongoing Lady Dior saga — which breaks this week in Air France Madame and rolls out to other fashion titles in the U.S., Europe and Asia later in the month — has her in Shanghai. Shot by Steven Klein, the image depicts the Oscar-winning actress in another mysterious entanglement with secret agents, this time on a balcony with the Chinese city’s futuristic skyscrapers in the distance — and with the Oriental Pearl Tower prominent, its spheres covered in quilting similar to the “cannage” pattern on the iconic Lady Dior handbag, the centerpiece of the advertising effort. Titled “Lady Blue,” the campaign is the third in a four-chapter series, and will be followed by a 12-minute film directed by David Lynch that was shot in Shanghai last December. The mini movie is to debut on Ladydior.com on May 15, the same day John Galliano is set to unveil Dior’s cruise collection in Shanghai. Teasers for the Lynch clip will start running online April 20. It turns out the Pearl building is key to the adventure, as the Eiffel Tower and Brooklyn Bridge were to the first two episodes. “In the David Lynch film, Marion is reciting a poem that he wrote, and was inspired by the Pearl Tower itself,” Galliano explained. “The words and building fuse in the picture he paints on-screen. Shanghai is such a vibrant and inspiring city.” — Miles Socha

MORE FAMOUS FACES: Speaking of actors and ad campaigns, Op has tapped a group of up-and-comers from shows such as “Glee” and “Gossip Girl” for its spring ad campaign. R&B singer Cassie joins “Glee” actors Dianna Agron and Cory Monteith, along with Jessica Szohr of “Gossip Girl,” in summer block party-inspired images, shot at Universal Studios in California. Ads will launch in the May issues of Elle, Teen Vogue and Cosmopolitan. Teen Vogue and Seventeen will have ads printed on metallic paper, to further integrate the campaign’s theme of “rock your shine.”

Op, which is sold exclusively at Wal-Mart, is expanding its online presence this season, with behind-the-scenes photos and b-roll on the brand’s Facebook page and its Web site. This isn’t the first time the California-inspired brand has gone the celebrity route in its ads: Last year’s Op campaign featured “90210” starlet AnnaLynne McCord. “One Tree Hill” actress Sophia Bush, Solange Knowles and Brody Jenner from MTV’s “The Hills.” — Amy Wicks

A WALK IN HIS SHOES: While most retailers last year saw a dramatic decline in business, Christian Louboutin claims to have emerged unscathed. In a piece in the May issue of Vanity Fair, the shoe designer said his business grew by double digits in 2009 (he sells more than 340,000 pairs of shoes annually, with prices that start at $495 and can reach the high five figures). He told writer Vanessa Grigoriadis that he doesn’t believe in advertising and marketing and said, while some celebrities receive a discount at his stores, he rarely gives shoes away. Louboutin is also very serious about those trademark red soles. Lanvin designer Albert Elbaz asked Louboutin to produce a line for one of his early collections. “At the time, I thought the red sole was too strong for my collection,” says Elbaz. “So I painted them black — a great mistake! He almost killed me.”

Louboutin’s best customers acquire dozens of shoes every year, but his “supertop customer” is author Danielle Steel, who reportedly has at least 6,000 pairs, if not more. “She comes to Paris, and she literally buys everything. Then she flies back to New York, says, ‘I’m a little disappointed — there’s nothing in the store,’ and walks out with 80 pairs,” he grinned. “She is super.” — A.W.