The September issue of Vanity Fair includes its assessment of this year’s best dressed. 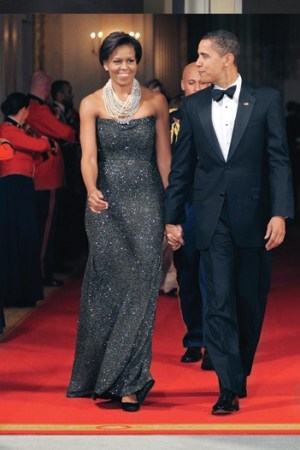 WELL DRESSED: Aside from cover profiles on Michael Jackson and Farrah Fawcett, the September issue of Vanity Fair includes its assessment of this year’s best dressed. President Barack Obama is on the list for the first time, while First Lady Michelle Obama makes her third appearance in a row (guess the Hall of Fame will come next year). New York City Mayor Michael Bloomberg also makes his first appearance, while longtime girlfriend Diana Taylor was nominated for the second year running. First Lady of France Carla Bruni-Sarkozy makes her second appearance on the list, but her husband, French President Nicolas Sarkozy, didn’t make the cut, despite her much-publicized restyling of him.

Others among the best dressed include Penélope Cruz, Anne Hathaway, Alicia Keys and Kelly Ripa, who all make their first appearances. Brad Pitt appears for the third time, but without companion Angelina Jolie, who was recognized along with Pitt in 2007 and 2008. As for the fashion set, they include Georgina Chapman, Rachel Roy, Tory Burch, Style.com’s Candy Pratts Price and Franca Sozzani, editor in chief of Italian Vogue and L’Uomo Vogue. — Stephanie D. Smith

This story first appeared in the August 4, 2009 issue of WWD. Subscribe Today.

ANTHRO HITS AIRWAVES: In the ever-competitive retail market, it would seem a reality TV show dedicated to exploring the origins of the merchandise would be a great marketing advantage. But Keith Johnson, buyer at large for Anthropologie, claimed that wasn’t the idea when he was approached by Sundance Channel to be the subject of an eight-part original series called “Man Shops Globe” — even if it’s a happy by-product. “It’s certainly a plus for Anthropologie to be able to educate people as to why we sell certain things, but the show is really about the creative process and how we find inspiration,” said Johnson on Friday at a Television Critic’s Association panel at the Langham Huntington Hotel and Spa in Pasadena, Calif. “Everyone wants to pay $8 for a bowl, but sometimes you need to see the people who are behind the item to see why it might cost a little more.” Johnson heads up the home accessories department at the Philadelphia-based chain (parent company is Urban Outfitters Inc.) and said he finds inspiration in almost anything, such as a book of 19th-century wallpaper he bought in Paris that will inspire designers “for years to come.” The show, which premieres Oct. 7, follows Johnson from London to Paris to Rio to South Africa as he scours flea markets and villages seeking out craftspeople. As for worries the show might reveal any trade secrets, he said: “We are always faced with people copying us, but we are a moving target.” Johnson was more worried about the impression his constant camera crew would have on his vendors. “I was petrified,” he said. “I kept wondering if I would look ridiculous to them.” — Marcy Medina

ZOE DOT COM: She’s already on Twitter, MySpace and Facebook, and she has her own television show, but Rachel Zoe has been without a Web site until now. Rachelzoe.com, which launches today and was developed by OperaNewMedia.com, will feature one new apparel, accessory or beauty item Monday through Friday that Zoe has dubbed a must-have. The entry will be followed by a link to buy the item online or, if it’s expensive, a “Parallel Universe” piece that is similar but less expensive. “I’m doing this because I’ve recently come to understand the importance of social media and I’ve become a little obsessed with it. I get addicted answering the questions that people ask me every day,” said Zoe, whose site subscribers (it’s free) also will get a daily “Zoe Report” e-mail highlighting more trends.

The site features tabs for clothing, accessories, jewelry, beauty and lifestyle under which Zoe blogs about her favorite things, as well as an “Ask Rachel” column. There are ads on the site by Piperlime.com, for which Zoe is a consultant, but she says she is not obligated to feature its merchandise nor will she receive payments from any of the items she endorses.

Eventually, there will be links to Zoe’s own branded merchandise, which will launch later this year. During New York Fashion Week, she will launch a collection of jewelry, bags, scarves, sunglasses, hats and fake fur outerwear, which will sell exclusively on QVC throughout the fall season, and she says another retail line is planned within the next year. — M.M.

THINKING AHEAD: Director R.J. Cutler already is moving on from “The September Issue.” The likely subject of his next project is Grant Achatz, the chef-owner of award-winning Chicago restaurant Alinea. A few years ago, Achatz, a protégé of Thomas Keller, was diagnosed with stage-four tongue cancer. The treatment Achatz received led to losing his sense of taste, and Cutler said he wants to make a movie about his ordeal. “I’m just starting to think about it,” he noted at a screening of “The September Issue” on Friday.

In the meantime, Cutler is spreading the word about “The September Issue,” since the marketing behind it is on a smaller, “documentary budget.” He added in the 320 hours of total footage that was shot at Vogue, he met several young designers but decided to focus on Thakoon Panichgul, who gets ample screen time. “There was something about him that struck me,” Cutler said. He said there will be extra footage on the DVD, but he wouldn’t change a thing about the documentary: “We captured a moment in time.” — Amy Wicks