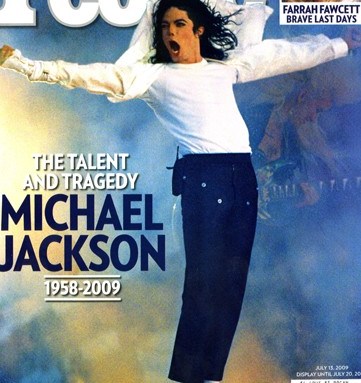 THE EARLY NUMBERS: With the estimated 30 million to 40 million U.S. viewers who were expected to tune into Michael Jackson’s memorial service Tuesday morning, it’s no surprise the celebrity weeklies also are seeing a bounce in newsstand sales from coverage of the King of Pop’s death. Multiple sources with access to scan data said early estimates show the entire category reported strong sales last week. People, whose best-selling issues have covered the deaths of Princess Diana and John F. Kennedy Jr., is on track to sell 2.8 million copies of its Michael Jackson tribute issue. Time Inc. published special editions of People last week with different back covers of the singer, one of a younger Jackson, the other from his adult years, that will be on newsstands through next week. If the estimate holds, the issue will have sold more than the Aug. 8, 2008, issue of baby photos of Brad Pitt and Angelina Jolie’s twins, Knox Léon and Vivienne Marcheline, and will have topped the Dec. 22, 1980, issue covering the death of John Lennon.

Us Weekly is on track to sell about 1.2 million copies of its issue with Jackson and two of his children on its cover with the cover line “His Final Days.” That would beat its average weekly sale for the year so far of 860,000 copies, and is also close to sales of Us Weekly’s best-selling story line this year surrounding Jon and Kate Gosselin’s disintegrating marriage.

Bauer Publishing’s In Touch sold more than one million copies of last week’s issue, which featured a split cover with Jackson and Farrah Fawcett. But sister title Life & Style used Jackson as the main cover image and sold 600,000 copies last week, a strong seller for the title.

Meanwhile, OK magazine caused controversy last week when it reportedly spent $500,000 to buy the image of a lifeless Jackson being loaded into an ambulance for its cover, a move most considered in poor taste. Figuring the cover would spark interest, OK increased its newsstand draw to 1.4 million, said sources outside of the magazine. However, early estimates forecast the issue will sell 550,000 copies, or just 100,000 more than its average weekly sale. Despite the less-than-bankable results, sources at competing titles said OK will spend another $200,000 to buy exclusive images of Jackson at home with his children for next week’s issue.

NEW LEADER: Former Hachette Filipacchi Media chief executive officer Jack Kliger has jumped back into publishing. He will join private equity firm OpenGate Capital as a senior adviser and as acting ceo of TV Guide Magazine, which OpenGate acquired in December from Macrovision for $1, according to filings with the Securities and Exchange Commission (Macrovision later sold tvguide.com and its television channel to Landscape for a reported $250 million).

Kliger joins OpenGate a year after he stepped down as ceo of Hachette, where during his nine years at the helm he managed titles including Elle, Woman’s Day, Car and Driver and Road & Track. He hit a few potholes there as well, however, including the launch and subsequent closure of teen title Ellegirl, raunchy men’s magazine Shock and women’s service magazine For Me. Prior to Hachette, Kliger was an executive vice president at Condé Nast Publications — parent of WWD — and publisher at Condé Nast’s Glamour and GQ. Kliger succeeds former ceo Scott Crystal, whom OpenGate dismissed suddenly last month. At the time, OpenGate named Michael Clayton, the company’s executive vice president, as Crystal’s interim successor. Clayton will remain with the company and report to Kliger.

OpenGate also owns an auto parts company, Gabriel North America, and European modeling agency Models1, but TV Guide is the firm’s first foray into media. “As OpenGate continues to expand into media, and as the company furthers its success with publications like TV Guide Magazine, Jack’s guidance on media and expansion strategies will be a tremendous asset to us,” said ceo Andrew Nikou of Kliger’s hire. That said, TV Guide has struggled since its new owners took over. The weekly magazine reportedly lost $20 million last year; through June 29, ad pages have declined 28 percent, to 364. — S.D.S.

MULTIMEDIA ARTIST: Ed Ruscha was the biggest draw last week at the contemporary-arts auctions in London, with his painting “That Was Then This Is Now” selling for $1.1 million. For those who can’t afford that steep price tag, a more affordable option is in the works: Ruscha has shot the new cover of TAR magazine. The Californian artist photographed actor Viggo Mortensen, and it marks the first time Ruscha has created a cover for a print media outlet. Past covers of TAR were created by Julian Schnabel and Damien Hirst. Inside the issue, which hits newsstands in October, contributors will include Mario Sorrenti, as well as Laura and Kate Mulleavy of Rodarte and Miranda July, who collaborated for a fashion portfolio. — Amy Wicks