First Lady Michelle Obama was on her way in Azzedine Alaïa... Dov Charney says he has "deep respect" for Woody Allen... 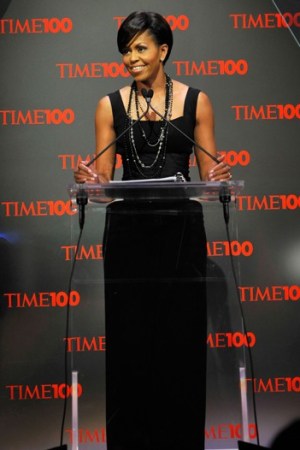 NOT QUITE THERE: First Lady Michelle Obama was on her way (in Azzedine Alaïa and a Peter Soronen corset, for anyone keeping score) and Oprah was chatting it up with Whoopi Goldberg and Suze Orman, but Nate Silver was standing all alone at the Time 100 Most Influential Dinner Tuesday night. The statistics whiz’s star rose last year with his Web site FiveThirtyEight.com, where he analyzed polls and predicted the electoral college vote with near-perfect accuracy. “I don’t think I’m actually in the top 100,” he confessed of his influence. “Maybe in the top 70,000.” Could Silver imagine a list in which he’d place himself near the top? He thought for a minute. “The nerdiest?” — Irin Carmon

CHEEKY TIMING: Tina Wells found herself off message Tuesday afternoon when she discovered she was named to playboy.com’s list of “America’s Sexiest CEOs.” The founder and chief executive of Buzz Marketing Group is no stranger to lists, having been named to Inc. magazine’s “30 under 30” and Essence’s “40 Under 40.” But Wells, whose company specializes in teen and youth marketing and research, was named to Playboy’s list of “Women on Top” the day her new book series for tweens, “Mackenzie Blue,” hit stores. Along with Wells, executives on the list included Victoria’s Secret ceo Sharen Turney; Claire Chambers, ceo of lingerie company Journelle, and Candida Royalle, chief executive of adult film company Femme Productions.

A spokeswoman for playboy.com said it didn’t contact any of the subjects before publication. “The response to the list has been positive so far, and we’re excited to honor attractive, hard-working, intelligent women who have made a real impact in their field and are leading companies both large and small,” she said.

Nevertheless, Wells was mortified given that many a beauty pageant queen has been dethroned for her affiliation with the adult entertainment brand. Luckily for Wells, her agent (Kate Lee at ICM) and book publisher (HarperCollins) have a sense of humor. By Wednesday morning, Wells laughed about getting into Playboy “with no removal of clothes.” But just in case, her office sent this statement: “Since no one from Ms. Wells’ office was provided prior notice regarding this selection, Ms. Wells was not afforded the opportunity to accept or decline the recognition. As with most of the opinions on the Internet, the views of Playboy.com are not representative of the views and opinions of Ms. Wells or her company.”

Speaking of Playboy, the June issue features a cover shot by Terry Richardson and it may come as a surprise to those who follow his career that this marks Richardson’s first time. After all, he’s already shot a cover for Penthouse and has published more than a few sexually provocative images. Richardson wasn’t available for comment about the Playboy cover (he’s on a shoot in Brazil) but Jimmy Jellinek, editorial director for the magazine, said, “For his work to appear in Playboy is a natural fit and all part of the continued evolution of our storied brand.” — Stephanie D. Smith and Amy Wicks

EVERYONE SAYS I LOVE YOU: Papers and blogs have been having a field day detailing the mud-slinging in Woody Allen’s $10 million lawsuit against American Apparel. On Wednesday, in his first public comment on the case, American Apparel founder and chief executive Dov Charney tried to put a damper on some of the nasty back-and-forth, which has included American Apparel attorney Stuart Slotnick raising the specter of Allen’s stormy relationship with ex-wife Mia Farrow and his subsequent marriage to her daughter, Soon-Yi Previn. “The media has misinformed the public that American Apparel supposedly plans to make Woody Allen’s personal life the central focus of our defense. This is false,” said Charney about the case, which is scheduled for trial on May 18 in U.S. District Court in Manhattan.

The dispute revolves around American Apparel’s unauthorized use on advertising billboards of an image of Allen from a scene in his film “Annie Hall.” “I have deep respect for Mr. Allen, who is a source of inspiration to me,” added Charney. “The billboards and images from the ‘Annie Hall’ movie were intended to be a parody/social statement and comedic satire to provoke discussion and public discourse about the baseless claims that had been made against American Apparel and myself.”

According to Charney, the billboards were meant to reference the bevy of sexual harassment lawsuits filed against him over the years. “The false media reportage is an obfuscation of the key issue in the case, which is whether the use of an image from the film ‘Annie Hall’…for purposes of evoking a societal discussion about these issues, is protected by the First Amendment,” said Charney. — David Lipke

GOING THE POPULIST ROUTE: As the clock ticks for Hartmarx, the company’s employees have quietly worked to stoke public support for its survival, and the media and politicians have responded in kind. Since last week, when Rep. Phil Hare (D., Ill.) criticized Wells Fargo, one of Hartmarx’s creditors, for reneging on its promise to fund the company through its bankruptcy — as first reported in WWD — no fewer than five other major media outlets in addition to blogs and local papers have picked up the torch, running stories that portray both the struggles of the 100-year-old Hartmarx in a sympathetic light and the mounting pressure from politicians to save the company.

On Saturday, the New York Post printed a piece that characterized the survival of Hartmarx as a growing “hot-button political issue.” The next day, the Chicago Sun-Times ran a news story that criticized Wells Fargo for accepting millions in Troubled Assets Relief Program funds and then refusing to use the monies to help finance the troubled company. On Monday, The Wall Street Journal’s Web site highlighted the growing political tenor to the Hartmarx story with an item headlined “Save the President’s Wardrobe.” On Wednesday, ABC local news in Chicago aired a segment on Hartmarx’s plight, detailing how a sale to liquidators would put the company’s laborers out of work.

While company executives have declined comment for these stories, a spokesperson at Hartmarx confirmed employees have reached out to local news outlets and politicians to help publicize its struggles. “This is the beginning of a new story for Hartmarx,” the spokesperson said.

Workers United, the union that represents many of Hartmarx’s laborers, has also been pitching media. — Brenner Thomas

LIGHT AT THE END OF THE TUNNEL: Rupert Murdoch expressed optimism about the remainder of 2009 at News Corp., boldly telling analysts during an earnings call on Wednesday, “the worst is over” and “the days of precipitous decline are done.” Murdoch’s comments represented a fairly dramatic shift from his pessimism on previous calls, and when pressed further, he acknowledged it’s still early but believes “we’ve already hit bottom.” The company reported a flat net income of $2.7 billion for the third quarter, ended March 31. In the newspaper division, which includes The Wall Street Journal and New York Post, operating income dropped 97 percent, to $7 million, from lower ad revenues, restructuring charges of $23 million and the strengthening of the U.S. dollar versus the British pound and Australian dollar.

As for the company’s digital efforts, Murdoch assured investors News Corp. is working on changing the current model to maximize revenues, noting content is extremely valuable and he wants to control prices — but it won’t be with the help of a certain handheld, electronic reader. “I don’t believe in the Kindle model,” Murdoch said. He also referenced a story in the Post on Wednesday that said News Corp. had assembled a team to devise a system to charge for online content. “There are a lot of ways we can make money in our content over and above advertising,” he said, declining to provide details.

And with newspapers, Murdoch isn’t interested in spinning off the business or buying The New York Times or Los Angeles Times, but he does want to change the traditional newspaper model — another plan, it seems, that he will have more to say about in coming months. — A.W.