First Lady Michelle Obama wore a Michael Kors dress for the event. Some more cynical insiders wondered whether it was her way of making up to the designer. 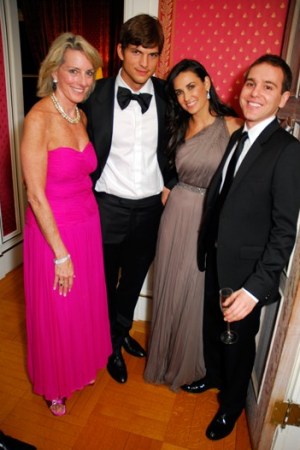 DINNER CONVERSATION: Attention stayed focused on fashion after Saturday’s White House Correspondents’ Dinner. After First Lady Michelle Obama wore a Michael Kors dress for the event, some more-cynical insiders wondered whether it was her way of making up to the designer, whose outfits have been miscredited by the White House on more than one occasion. But at least one person doesn’t think so: Kors himself. “I am sure a woman as smart and organized as Mrs. Obama knew in advance what she planned to wear this week for both events,” he told WWD. “I am honored that she chose to wear my clothes to two events in the same week and looked so chic at both occasions.”

Meanwhile, speculation swirled as to why White House Social Secretary Desirée Rogers and senior adviser Valerie Jarrett declined to disclose whose dresses they wore for the evening. Some speculated the White House advised them to focus their discussions on things other than fashion after they posed for two splashy magazine covers loaded with expensive designer fashion credits. In a WSJ. cover story on Rogers, the magazine reported that a White House deputy press secretary nixed a shot of her in an Oscar de la Renta gown in the First Lady’s garden. Rogers did sport a short flowered de la Renta dress on the cover of the current Capitol File along with Jarrett in Max Mara.

Jarrett and Rogers still gave their unidentified frocks a workout on Saturday (actually, early Sunday morning), hopping from the dinner to after parties hosted by Capitol File and Vanity Fair. At Capitol File’s bash at the Corcoran Gallery of Art, guests who bopped between Maker’s Mark-sponsored open bars included Eva Longoria Parker, Forest Whitaker, Jason Wu, Chris “Ludacris” Bridges and Wanda Sykes, who drew cheers from partygoers after her knock-’em-dead performance at the dinner. Meghan McCain bounced among Jim Cramer, Todd Palin, Prince Al-Waleed bin Talal and White House Chief of Staff Rahm Emanuel, who was approached on the dance floor for photos with fans, including “Gossip Girl” father figure Matthew Settle. Palin subbed for his wife, Sarah, who was invited by Fox News but stayed in Alaska to help combat massive flooding caused by melting ice jams on the Yukon River. Asked how he felt being a grandfather, Palin said: “I don’t like being called a grandfather.”

Later, Rogers and Jarrett walked over to the more exclusive Vanity Fair/Bloomberg affair at the residence of French Ambassador Pierre Vimont, which also drew Demi Moore and Ashton Kutcher, Tim Daly, Jon Hamm and Jennifer Westfeldt, Taye Diggs, Katie Couric, Mayor Michael Bloomberg and girlfriend Diana Taylor. Owen Wilson sprawled on a chaise lounge near the entrance; Will Arnett and Jason Bateman lingered by the bar, while Longoria Parker tucked away near the garden with Secretary of Labor Hilda Solis. After a day of being chased by giggly girls, older women, fathers and cable news correspondents, “Gossip Girl” star Chace Crawford grabbed a cappuccino as he made his way to the garden — and took more pictures with fans as he exited. By the end of the night, Rogers, Jarrett and publishing mogul Linda Johnson Rice lounged together on a sofa surrounded by standing male dignitaries.

“This is more my type of party,” said Bridges as he stood nearby.

By the end of the weekend, at least one celebrity would bring home more than just a few business cards. “I learned that John Adams and Thomas Jefferson died on the same day within hours of each other 50 years from signing the Declaration of Independence,” said Christian Slater, who was a dinner guest of Congressional Quarterly. — Stephanie D. Smith

SPECIAL TWEET: Demi Moore and Ashton Kutcher do it, Diddy does it and even Oprah Winfrey is hooked on it. Now Donna Karan is getting in on the social networking act. DKNY just launched an official Facebook page and is offering an inside view of the day-to-day life of a twittering “DKNY PR Girl” at Twitter.com/dkny.

“After seeing the many Donna Karan and DKNY fan sites that were being created by anonymous people and joined by thousands, we have decided that the interest and enthusiasm for our brands deserves attention beyond what our Web sites provide,” said Patti Cohen, executive vice president of global marketing and communications.

On Facebook, fans of DKNY can follow status updates and post their feelings about current DKNY-related topics. Many of the fans have been expressing their feelings about the dismantling of the iconic DKNY wall in SoHo. A Donna Karan New York Facebook page is expected to launch in the coming weeks.

“DKNY PR Girl,” meanwhile, is a DKNY public relations team group effort, and offers insights into the life of a publicist in New York, from everyday tasks to parties, runway shows and photo shoots.

“The ability to interact with our fans and potential new customers in this arena is very exciting,” said Cohen. — Marc Karimzadeh