What's another few million when you've already got $40 billion in the bank? 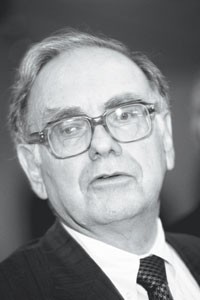 MO’ MILLIONS: What’s another few million when you’ve already got $40 billion in the bank? Financial wizard Warren Buffett‘s book with former Wall Street analyst Alice Schroeder sold to Bantam on Wednesday for just above $7 million, according to a source with knowledge of the deal. However, Buffett won’t be claiming any of the proceeds, said an employee of his company, Berkshire Hathaway, who would not elaborate on whether Schroeder would get the whole take. (Schroeder could not be reached for comment.)

The book, described as something between a biography and a book of financial advice, will be written by Schroeder, with Buffett’s full participation. Crain’s and the New York Post reported earlier this month that bidding had begun and was expected to reach the lofty levels known by few authors who don’t have the last name Clinton or Welch.

While such a hefty investment in the project will naturally raise expectations, luckily for Schroeder, a fair amount of research has already been done on her subject. Charlie Rose recently released a DVD documentary on the Omaha investor. “In this far-reaching conversation, Buffett discusses his life, his friendships, his view of the world and America’s role in it and, of course, his celebrated financial strategies,” says a banner on Charlierose.com.

Sounds like a page from the Bantam book proposal.
— Sara James

ONLINE IDENTITY THEFT: If you happen to log on to Gawker.com and scroll through the comments section in the coming weeks, and run across a posting by “John Huey,” don’t assume the editor in chief-elect of Time Inc. has taken to airing his observations on the media gossip site.

Chances are those Huey posts are by Graydon Carter.

Gawker instituted an invitation-only comments section late last month, asking a 100 or so bloggers and members of the media to sign up so they could applaud, quibble about or add to items at their leisure. “It covers the gamut,” co-editor Jesse Oxfeld said of the original list, “from people’s input we would love to have, to people who were funny and would be good at it, to people at various media organizations.”

Gawker’s other co-editor, Jessica Coen, was the one who asked Carter to join. She explained, “While it’d be great to have Graydon commenting (seeing as his publication is one of our favorite topics), we really just hoped that inviting him to comment would prompt him to extend us an invitation to the Vanity Fair Oscar Party.”

Upon receiving his invite, Carter wrote back, “I’ll give it a shot, but I’m not much of a blogger or anything. It’s all I can do to get up in the morning and shove an issue out once a month.”

A few days later, when WWD asked him if he’d had a chance to choose a handle or post anything yet, Carter said, “I was hugely flattered by their offer. Then I went and lost the instructions on how to do it. When I do, my ‘handle’ will be ‘John Huey.'”

Impersonation issues notwithstanding, Carter better hurry. As of press time Wednesday, “John Huey” was still available, but there are still new members signing up to post. “We haven’t been incredibly stingy about invitations,” said Oxfeld. “We decided as long as the person had an e-mail address that ended in @fairchild, @condenast, @hearst, @nytimes, we would give them one in the hopes that they might have some good internal gossip.”

No word yet on whether the real Huey received an invite to post, and if so, whether he’ll sign up as “Graydon Carter.”
— S.J.

FIRSTVIEW GETS LAST WORD: A fashion dispute just landed on the cover of The New York Law Review.

Firstview.com founding photographer Don Ashby, who was cleared of criminal charges in June after being arrested in Paris in 2003 for photographing fashion shows without permission from the designers, just won another legal victory, this time in the U.S. civil courts.

“Two French fashion houses that were involved in civil lawsuits against us [in France] tried to have the judgment enforced here in the States,” said Ashby. “When [the civil suit] started in France, our lawyer said we shouldn’t even bother, so we naturally lost. The judgment was 500,000 francs, and a fee for every day we didn’t take [the photos] off the Internet. Every once in a while, their lawyers would call us up and say, ‘You owe our clients a zillion dollars.’ And our lawyers would call back and say, ‘That was in France. We are an American company.’ So, finally, two of the houses were industrious enough to file suit in the U.S., and a judge just said we’re covered for journalistic purposes under the First Amendment.”