A book about Stanley Marcus, whose imaginative skills made Neiman Marcus a retail icon, will be published this month. 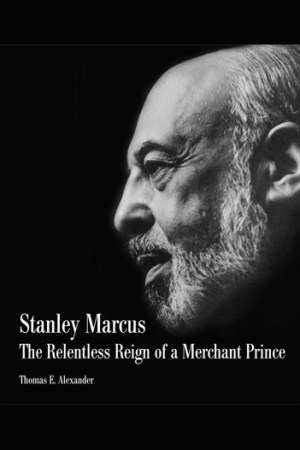 MR. STANLEY’S WAY: Much has been written about the retail prowess of the late Stanley Marcus, whose imaginative marketing and buying skills made Neiman Marcus a retail icon.

A more personal account of the cigar-loving bon vivant and his mischievous, maddening management style emerges in Thomas E. Alexander’s new book, “Stanley Marcus: The Relentless Reign of a Merchant Prince,” to be published this month by Akin Press.

“He was one of those sort of people you could never really satisfy — there was always a way to improve,” recalled Alexander, who headed marketing at Neiman’s from 1970 through 1987 and worked directly with Marcus the first five years. “People came and went with great regularity at Neiman Marcus, and if you didn’t live up to his standards, you were gone.”

A member of the Texas Historical Commission and author of four books on Texas military history, Alexander devoted four years to chronicling Marcus’ eccentric style as well as Neiman’s history.

His backstage view reveals the more comical details of company lore, such as Lord Mountbatten, the British statesman and war hero, lobbing a tomato across a luncheon table to shatter an abrupt social chill emanating from Stanley, or an antismoking actor Larry Hagman wielding a handheld fan to blow Princess Margaret’s cigarette cloud right back in her face during a Neiman’s-sponsored dinner.

With great affection for the man he deems a “genius,” Alexander portrays Marcus as an obsessive micromanager who expected his executive team to be attentive 24/7.

“He was probably the toughest marketing master who ever lived,” Alexander said. “For those who worked for him, it’s a blessing that e-mail and Twitter and cell phones had not been invented. We all hoped somehow he’d go on a long-distance trip around the world and crash land safely on a remote island, but even if that had happened, I’m sure a message in a bottle would have shown up. I don’t think he ever slept. He worked the whole time.”

Marcus cranked out nonstop memos via Dictaphone, critiquing the tiniest details and dispatching suggestions for improving the company.

“I got 230 typewritten memos in five working days’ time,” Alexander said. “He would comment on the way the store name looked on a truck, the way the type was too small in an ad, a model’s pose.…And if you did not respond in two days’ time, you would get another memo with ‘Please let us have your reply.’”

He played mind games with executives, such as offering them their pick of his pipe collection and then reclaiming them within days. Alexander writes that the tactic was probably prompted by Marcus’ curiousness to see which implement they chose.

Marcus’ ego, once so prodigious that he rewrote the lyrics to “My Way” to reflect his own career and sang it to his associates at a company anniversary, mellowed in later years.

But he never lost his intellectual edge. At 95, Marcus, who died at 96 in 2002, told Alexander, “‘Without change, there is no challenge, and without challenge, there is only the status quo, but no progress.’” — Holly Haber

NEW HIRE: Susannah Draper, Tory Burch’s public relations director, is leaving the company to join Alice + Olivia as vice president of communications, effective Dec. 8. In her new position, Draper will head the contemporary label’s p.r. and marketing department. Her last day at Tory Burch will be Tuesday. “Working with Tory over the past three-and-a-half years has been an incredible experience,” Draper said. “I feel so fortunate to have been a part of her team as she has grown the brand and expanded globally.” She joins Alice + Olivia at a time of several business developments. In addition to opening a pop-up store at Scoop uptown on Third Avenue earlier this month, designer Stacey Bendet is adding e-commerce to her Web site, aliceandolivia.com, today. The site will offer the fall, holiday and resort lines alongside basics, children’s wear and accessories. It also will feature a blog by Bendet, several videos and a Stacey’s Picks of the Week section. — Marc Karimzadeh

VINTAGE POINT: While it had the life span of a mayfly compared with Vogue and Vanity Fair, Flair magazine is still influencing design snobs and collectors almost 60 years later. One of those collectors, Ivy Baer Sherman, has just launched a new title inspired by Flair called Vintage. In 2003, Sherman was working as director of publications for the Friends Seminary, a private school in New York, when she happened to see a retrospective of Flair founder Fleur Cowles’ work at the Pratt Institute. She quickly became a fan of the title and its distinctive die-cut pages. In conceptualizing Vintage magazine, however, “the goal wasn’t to replicate [Flair]. I was inspired by Flair rather than really wanting to reproduce it,” she explained.

With a print run of only 1,500 and a cover price of $20, the biannual Vintage is something of a limited edition. It will be sold at specialty bookstores, including Rizzoli. The premier issue is hand-bound and features quirky design elements: A story about record jackets by former Village Voice columnist Gary Giddins is presented in cutouts that resemble a 45 rpm record, and a piece on bygone hairstyles has a flip book-like construction. “I worked with a printer who probably rolled his eyes [at] me,” says Sherman of her unusual demands. Articles on wedge heels, Barbie and Forties recipe cards round out the retro package, and the next issue will include an essay on “Mad Men.” Sherman, whose title is self-financed for now, said she believes “there’s still room for print.…People still like to sit down with something, and I think this [magazine] proves that.” That said, Vintage also will have an online component, set to launch in a few weeks. — Véronique Hyland