Could there be a day when vogue.com is independent of style.com? 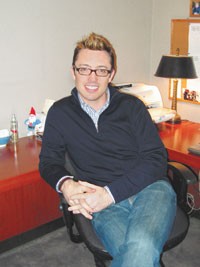 NET ‘SCAPE: Could there be a day when vogue.com is independent of style.com? Perhaps. While Condé Nast continues to expand its destination sites — style.com, mens.style.com, epicurious.com and concierge.com — its Web strategy for 2006 also includes funneling more resources into its magazine companion sites. Individual Condé Nast magazines that don’t already have designated Web editors will likely soon be getting them.

Editorial director Tom Wallace told WWD, “We are encouraging the editors of all our magazines to assess their needs and develop a plan to achieve their goals. Even the magazines that participate in the destination sites” — like Vogue and GQ — “will have their own Web ambitions and will have the resources to achieve those ambitions.” Wallace stressed that it was up to the individual editors to decide whether or not to add to their headcounts this year, and said the companywide initiative was ongoing. Several publications are already said to be interviewing candidates. “We want our presence [online] to make sense,” he said, “and we want to bring to it the skills and the standards we’ve established in print.”

Vanityfair.com’s approximately 700,000 hits and 1,000 new print subscribers on the first day the magazine’s March cover was posted online was seen within Condé Nast — parent of WWD — as an indicator of a companion site’s potential to attract new readers. The New Yorker’s cartoon contest and Self’s online diet challenges have also been cited internally as model companion applications on the Web. So far in 2006, Self’s print subscriptions are up 168 percent, as compared with the same period in 2005. “We just added the Jump Start diet to our site in January, and about 10 percent of the [51,000] Jump Start diet users are subscribing,” said Self editor in chief Lucy Danziger. Last year, the Self Challenge, an annual three-month diet that begins in March and ends in May, had 250,000 online participants, and comparably boosted subscriptions.
— Sara James

REMINISCING, PART ONE: Journalists are paid to tell stories — just not, usually, their own. But five of them got the chance to do just that Tuesday night as part of a new nonfiction reading series called “Scratch It NYC.” The series’ organizer, Deborah Baer, is a self-described “sleazy tabloid reporter” who has worked for Ladies’ Home Journal, Lifetime and several celebrity weeklies, including In Touch, her current employer. Baer provoked shrieks of laughter from the capacity crowd at an East Village tavern with her essay about the shame of living in the reflected glory of people like Angelina Jolie and Jennifer Aniston. “I meet famous people,” she said. “What does that make me? Not a hell of a lot, besides a major name-dropper.”

Trying to list her greatest accomplishments, Baer came up comically short. “I was the first to interview Britney Spears after her 48-hour marriage to Jason Alexander. And you know that quote about Katie Holmes dreaming of marrying Tom Cruise since she was a kid? That was mine. Please, hold your applause.”

Another tabloid journalist, Celebrity Living executive editor Greg Emmanuel, elected to talk about growing up with a severely obsessive-compulsive father. Maria Lissandrello, editor in chief of an as-yet-unnamed Bauer Publishing start-up, veered into more serious territory with a narrative about getting out of an abusive marriage. Sally Koslow, former editor in chief of Lifetime and McCall’s, lightened things up again with a tale of two dogs. (Koslow recently made a deal for her book, “Little Pink Slips,” a roman à clef based on Rosie O’Donnell‘s takeover of McCall’s.)

Last up was Jason Oliver Nixon, the soon-to-be ex-editor in chief of Gotham and Hamptons. (Nixon is stepping down to become consulting style director of parent Niche Media.) Nixon said he would miss the “heaps of terrific swag” that went with the job, but not the endless photo ops. “My partner, John, gets annoyed with me because, no matter where we go, I make him take shots of me with the nearest boldfaced name, just so I have a picture with my face in it to stick on the [editor’s] page.”
— Jeff Bercovici

REMINISCING, PART TWO: The April issue of Glamour features something you don’t see every day: a Hearst Magazines executive being quoted in a Condé Nast publication. Writer Geraldine Sealey interviewed Valerie Salembier, senior vice president and publisher of Harper’s Bazaar, for the magazine’s “What It’s Really Like” column. The topic: Salembier’s 1990 firing from the New York Post, where she had been president for two years. Salembier got off to a difficult start at the Post when someone leaked her salary of $400,000, earning her the resentment of reporters (who typically earned $25,000) and the nickname “Salary Valerie.” But she was still “devastated” when the paper let her go. “I had been on everybody’s guest list — the mayor, business leaders. Restaurants would call and say, bring eight friends! But after I was fired, my phone stopped ringing. In the snap of a finger, I was off every list. I landed another big position within months, but getting fired gave me a perspective, frankly, that I had not had: No job keeps you warm at night.”
— J.B.