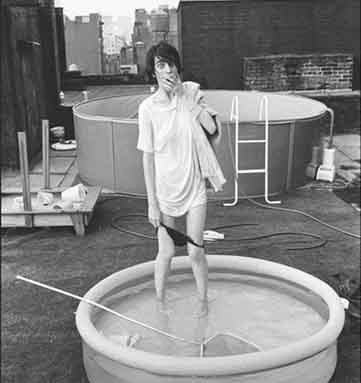 PICTURE THIS: Nostalgia was in the air at the Not Fade Away Gallery on Thursday night, where New Yorkers of a certain age (and some of a younger one) gathered to celebrate former SoHo Weekly News photographer Allan Tannenbaum’s new exhibit “New York in the 70s,” a genre-spanning selection of pictures culled from the lensman’s recently re-released book of the same name (The Overlook Press), on view through June 25. “The Seventies in New York was a time where basically anything went,” explained Tannenbaum, taking a pause from signing books and greeting guests including music writer Danny Fields, photographer Bob Gruen, James Wolcott and Patti Smith Group guitarist Lenny Kaye. “It was a very hedonistic period, which I’m not sure exists in this day and age anymore.”

To be sure, you’d be hard-pressed today to find a rock star willing to strip down to Skivvies for an impromptu shoot in an inflate-a-pool (see Tannenbaum’s “Patti Smith Soho Rooftop, NYC, 1974,”) or a world-famous couple allowing a newspaper photographer in on the most banal, private moments (as John Lennon and Yoko Ono did over several months in 1980). “These were one-on-one things,” Tannenbaum said of shooting famous faces, the results of which hung alongside his photos of seminal protests, parades, happenings and late nights at Studio 54 and Plato’s Retreat.

All of which raises the question, Is there a trick to being at the right place at the right time? “I think the word is the ‘moment’ — you’re looking for a moment to happen. You have to pay attention. A lot of it is just understanding the scene, knowing where you are and being ready [for] when the moment happens,” Tannenbaum said, a moment before Patrick McMullan tapped him on the shoulder. “I hate to interrupt,” said McMullan, an old friend, “but I have the famous photographer Lynn Goldsmith, [Allan’s] contemporary, to bring over.” After smiling with Tannenbaum for a few McMullan shots, Goldsmith, who’s known for her portraits of musicians like Sting and Bruce Springsteen, offered her take on the show: “The interesting thing about Allan’s work, why it’s so good, is because it covers not just music or entertainment, but it’s like the title of his book — it’s the times. It’s very exciting to see [his work] all together in one place in that it’s really what life was like in the Seventies.” — Nick Axelrod

SHRINKING: As Hearst Magazines continues to increase the size of its magazines — with Country Living on deck for this summer — The New York Times is moving in the opposite direction. In two weeks, The New York Times Magazine will trim its size by nine percent, although that’s not all that is changing. The magazine is also planning to debut a redesign after more than a decade with the same look, although details weren’t available at press time. The new look follows the decision to drop weekly fashion coverage in the magazine, focusing it instead in T. “With the resizing of the magazine, we thought this would be the perfect opportunity to reinvent,” said a spokeswoman. Perhaps this will ease the concerns of advertisers that will miss those slightly larger, glossy ad pages. — Amy Wicks

NEW GUY: After a five-month search, Playboy Enterprises has appointed Scott Flanders as chief executive officer and a member of the board. Before joining Playboy, Flanders was the president and chief executive of Freedom Communications. Former chief executive Christie Hefner left the company in December. — A.W.

MARIE-GO-ROUND: Marie Claire fashion director Nina Garcia made some changes to her staff just before the Memorial Day holiday. Garcia promoted accessories director Nina Sterghiou to market director and Christine Kistner to associate market editor from fashion assistant. Sterghiou replaces Kathryn Floyd, who’d been at the magazine since 2005 and has left the company. Market editor Paula Knight has also left the magazine. Though some speculated both Garcia and editor in chief Joanna Coles faced pressure to cut costs at the magazine and promoted less expensive employees to roles filled by staffers with more tenure, a company spokeswoman said the moves were made “under the new leadership of Nina Garcia.” — Stephanie D. Smith

ALL FOR EXPERIENCE: It’s a touchy time in the media economy, as increasingly desperate newspaper executives consider charging for Web content to make up for lost ad revenue and print subscriptions. No one has become a more notorious symbol of the upending of the business than Arianna Huffington, with her fast-growing site of news aggregation and unpaid original content. Advertising Age’s media columnist Simon Dumenco wrote Monday that Huffington receiving a Lifetime Achievement award from the Syracuse University S.I. Newhouse School of Public Communications was “bitterly ironic,” adding, “The school — which exists to train journalists — should know better than to honor a woman who thinks journalists should work for free!”

This year, The Huffington Post will have 22 interns who are apparently undeterred by media job losses and closings, a number that approaches that of paid staff (about 35 in editorial, 60 on staff overall.) That includes one intern who paid at least $13,000 in a charity auction for the privilege, as well as former New York Gov. Eliot Spitzer’s daughter. Perhaps it will comfort Dumenco to know that about half of these interns are being paid, a spokesman for the Huffington Post confirmed. The spokesman declined to say how much, calling the question “silliness.” — Irin Carmon

SAFE LANDING: The magazine business faring as it is, and in-flight magazines bearing the relative stigma they do, one could be forgiven in seeing the relaunch of United Airlines’ Hemispheres as a last resort for out of work magazine folk. After all, new editor in chief Aaron Gell was executive editor at Radar (folded in October 2008), and art director Rob Hewitt worked at Premiere (folded in March 2007). But Gell swears that, though “in the past, it wouldn’t have been a career move I was looking to make, it’s turned out to be far and away the best job I’ve ever had in magazines.”

Gell said the job has included a lot of editorial freedom, working with ex-Radarites like Dale Hrabi, Willa Paskin, and Sarah Horne, as well as well-known writers from titles like Rolling Stone and GQ, including Jason Gay, Mark Healy, and Jenny Eliscu. The magazine, now under contract with a new custom publisher, Ink, has also moved away from a travel magazine focus to a general interest model, aimed at the broad, affluent audience afforded by the airlines’ passengers. The idea is that the magazine’s format also presents itself to readers when they’re more disposed to reading a meatier magazine story.

Hemisphere’s publishing side has also been turning away some of the traditional advertisers, Gell said, in order to create an environment more hospitable to luxury advertisers, notwithstanding the tough times in that category. Accordingly, new advertisers include Ulysse Nardin, Hamilton Watch, Elysian Hotel, and Ritz Carlton Residences. — I.C.