NEWSSTAND SCORECARD: After taking a tumble on the newsstand in the latter half of 2003, Elle made it up and then some in 2004. Official numbers won’t be out for several weeks, but Elle Group publishing director Carol... 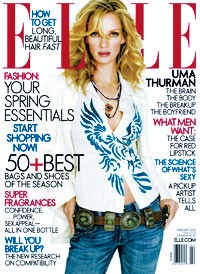 NEWSSTAND SCORECARD: After taking a tumble on the newsstand in the latter half of 2003, Elle made it up and then some in 2004. Official numbers won’t be out for several weeks, but Elle Group publishing director Carol Smith said the title reported a single-copy sales average of about 298,000 in its semiannual statement to the Audit Bureau of Circulations. That’s a 24.5 percent increase. Elle was also up 21.8 percent in ad pages in the first quarter of 2005, with 427.6, according to Media Industry Newsletter.

COUNTDOWN STOPPED AT ONE: If you’re wondering what’s going on with Esquire One, the international fashion spin-off conceived by former Esquire fashion director Stefano Tonchi, the answer is: nothing much. Hearst, which originally had planned to launch Esquire One in six countries (the U.S., U.K., Russia, China, Italy and Japan) starting in fall 2004, quietly put the project on hold after Tonchi left for The New York Times in October 2003.

But that didn’t stop Esquire editor in chief David Granger from using it as bait to lure Nick Sullivan over from British GQ to replace Tonchi. Sources close to Sullivan said the chance to edit his own semiannual men’s fashion title figured prominently in his decision to accept the Esquire job in December 2003. Recently, one source added, Sullivan has been expressing frustration over Hearst’s apparent lack of interest in reviving the project.

Granger, however, insists Esquire One isn’t dead, just in a cryogenic state. “It’s a project that we continue to think about and explore,” he said. “It was a complicated idea, and, given that Nick was new to the country and to the magazine, his concentration has been on putting his imprint on the style pages and features in the magazine.” Translation: It will be a while before the thaw sets in. — J.B.

T TIME: The New York Times Magazine is saying ciao to Milano and launching its upcoming spring fashion issue of T there. Style editor Stefano Tonchi said the plan is to distribute 10,000 copies at the shows and hotels. The issue, with actress Ziyi Zhang on the cover, features a fashion shoot by Araki and a 6,000-word profile of Karl Lagerfeld by Times fashion critic Cathy Horyn. — Miles Socha

VIRTUAL LUXE: French publisher Assouline has ventured onto the Web in high style with Luxuryculture.com. Launched without fanfare in January, the English-language site is billed as the ultimate forum for luxury window-shopping, with the look of a glossy magazine. Online “departments” on fashion, beauty, jewelry, timepieces, cars, design, gourmet and art contain listings and product news — and links to commerce-equipped sites. “This is about technology serving luxury and not the other way around,” said editorial director and publisher Yaffa Assouline. Advertising is sold on a seasonal basis, with rates ranging from 15,000 to 50,000 euros, or $19,500 to $65,000 at current exchange. To reach a first-year turnover target of 1 million euros, or $1.3 million, Assouline just hired Helene Mengus, former associate publisher of French Vogue, as publisher of the site. Current advertisers include Chanel, Christian Dior and Dior Homme, Jimmy Choo, Hobbs, ST Dupont, the Ritz Paris and the Plaza Athénée. — Tina Isaac

THE QUARTER BOUNCE: Bauer Publishing, which sparked the current vogue for sub-$2 cover prices with In Touch, is hoping to juice sales of the new Life & Style Weekly with a 25-cent promotional price. The March 21 issue (on sale starting March 14) will cost the same as The New York Post, confirmed Mark Pasetsky, Life & Style’s general manager. “We expect this promotion will help accelerate the growth of the magazine,” he said, adding that it recently raised its rate base to 350,000 from 200,000. Indeed, when In Touch ran a 25-cent promotion last July, the issue sold 1.5 million copies, way overshooting its 650,000 rate base (now at 1.02 million).

The need to ramp up Life & Style’s readership has gained urgency with the news that American Media is developing a similar title. Tentatively called Celebrity Living Weekly, it will launch in April 2006, assuming AMI chairman David Pecker can sell his backers on it. According to an e-mail that has been circulating among former AMI employees, the first issue of Celebrity Living will sell for 25 cents before jumping to $1.89. An AMI spokesman said he could not confirm that detail.

In other Life & Style news, Samantha Youngman Meiler has been named editor, reporting to editor in chief Sheryl Berk. She was previously developing a new women’s title for Bauer, which sources say is a shopping magazine. That project is still going ahead, and Self veteran Andjrez Janerka was recently brought in as its art director. — J.B.