Donna Karan's new Collection campaign features a sun-kissed Kate Moss showing off her sexy and sultry side &mdash a far cry from the waiflike mien that...

By Marc Karimzadeh and Marcy Medina and Whitney Beckett and Stephanie D. Smith and Amy Wicks and Andrew Roberts on December 5, 2007
View Slideshow 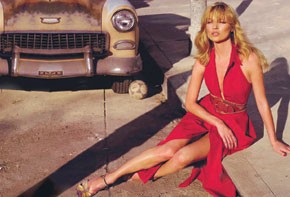 NUEVA KATE: Donna Karan’s new Collection campaign features a sun-kissed Kate Moss showing off her sexy and sultry side — a far cry from the waiflike mien that made the model a household name in the early Nineties. Moss, who makes her first appearance in Karan’s ads, was photographed in Los Angeles by Mert Alas and Marcus Piggott last month. The images have a cinematic feel, with Moss dancing to the sounds of a Cuban band, or hanging out on Havana-like streets. “It’s Nueva York,” Karan said. “We wanted a kind of Cuba…[Kate] understood it completely. It didn’t feel like a model just wearing the clothes, it felt like somebody who really owned it, somebody who came alive with a story behind her.” The campaign breaks in fashion and lifestyle books in February. Meanwhile, TV viewers can get a Karan kick tonight, when the designer will be a guest judge on Bravo’s “Project Runway.” — Marc Karimzadeh

CARTOON TROUBLE: During the past year, R.J. Reynolds Tobacco Co. has taken several hits in the media and on Capitol Hill over its print ads and now it’s facing legal trouble. Eight states, from California to New York, are filing lawsuits regarding the Camel Farm advertisement that ran adjacent to an independent rock music section in the Nov. 15 issue of Rolling Stone. The section opened with a full-page ad illustration of a woman above a banner reading “Welcome to the Farm,” advertising RJR’s Camel cigarettes. After the section’s cover, there is then a two-page ad featuring a camel in silhouette with the words, “The Farm: Free Range Music” and the headline, “Committed to Supporting and Promoting Independent Record Labels.” The editorial in the section follows, made up of cartoon images and graphics.

In a statement Tuesday, Ohio Attorney General Marc Dann asked a judge to hold RJR in contempt, and issue a fine of more than $5 million for violating the Master Settlement Agreement, which prohibits the use of cartoons in ads to promote tobacco products. Similar language was used by other attorneys general in the case. A spokesman for RJR reiterated the company would not have chosen to advertise in the Nov. 15 issue if it knew of cartoonlike graphics prepared by Rolling Stone.

Moreover, the Master Settlement Agreement stipulates that if a party pursues action, such as a lawsuit, it will give 30 days’ written notice of its intent. That period can be shortened if there is a compelling time-sensitive public health and safety concern. However, no such notice or reference of time sensitivity was provided to RJR, said the spokesman.

As recently as last week, the tobacco committee for the National Association of Attorneys General received a letter from Martin L. Holton, senior vice president and general counsel for RJR, noting he shares its concern over the ad and “will consider whether there are measures the company can take to help avoid it in the future.” Apparently that wasn’t enough, as more states are considering legal action. Last week, the company said it would halt all print advertising in 2008. — Amy Wicks

WHAT JOURNALISTIC ETHICS?: Forget the iron wall of publishing between advertising and editorial. At Nylon, the wall appears to be made more of, well, nylon. Marvin Scott Jarrett, Nylon’s editor in chief, spoke during a roundtable for the YMA Fashion Scholarship Fund Tuesday, where he told more than 100 FIT students what no journalism school ever would: “I think of advertisers as investors investing in my vision, and it’s hard not to take people who don’t support your magazine in a different breath,” he said. “I run a fashion-entertainment magazine, where it’s not church and state. To me, it’s one big church.” — Whitney Beckett

GUCCI’S REEL MOMENT: The Gucci dynasty could be the subject of a biopic directed by Ridley Scott. A Scott representative confirmed the Oscar-nominated director has been lined up to direct and produce the film through his Scott Free Productions shingle. The film will focus on the figures behind the rise and near fall of the Italian fashion empire in the Seventies and Eighties. Much of the story will revolve around the late Maurizio Gucci, grandson of founder and saddle-maker Guccio Gucci, who battled with his cousins in and out of the courtroom to protect his 50 percent stake in the business. Scott and his partner of eight years, Italian beauty Giannina Facio, have a predilection for fashion. For 2001’s “Hannibal” they turned to Roberto Cavalli, Giorgio Armani, Cerruti and Gucci to outfit stars Julianne Moore, Sir Anthony Hopkins, Gary Oldman and Ray Liotta.

But judging by Scott’s talent for illustrating life’s murkier aspects, the film will likely also chart Maurizio’s stormy relationship with Patrizia Reggiani, whom he married against his father’s wishes in 1972. Reggiani was convicted of hiring a hit man to gun down Maurizio outside his Milan office in 1995, 10 years after the couple split, and is currently serving a 26-year prison sentence.

A spokeswoman for the Gucci brand, which is now owned by PPR, said Tuesday she knew nothing of the project and that the company was not involved.

Scott, whose credits include “Alien,” “Blade Runner,” “Gladiator” and the current hit “American Gangster,” starring Denzel Washington and Russell Crowe, will coproduce the film with Facio. No word yet on who might play Maurizio — let alone the likes of Domenico De Sole or Tom Ford. But given there’s no script and a Writers Guild strike, audiences shouldn’t hold their breath for the project to hit the big screen. It’s more likely they’ll get Gucci’s wait-listed Aviatrix Boston bag before that happens.