Stefano Tonchi, the new editor in chief of W, talks about his changes to the magazine. 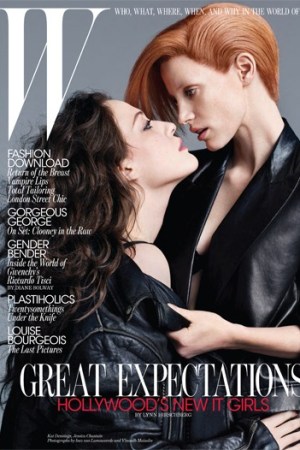 ON THE W WATCH: Stefano Tonchi, the new editor in chief of W, has rarely spent a day out of the media-gossip pages since leaving T: The New York Times Style Magazine to assume the helm of the suffering Condé Nast fashion title in April. He’s now about to reveal his vision for the title with the September issue, which boasts a full, front-to-back redesign (not to mention a triple gatefold cover shot by Inez van Lamsweerde and Vinoodh Matadin, which features eight up-and-coming actresses — Kat Dennings, Jessica Chastain, Yaya DaCosta, Greta Gerwig, Mary Elizabeth Winstead, Jennifer Lawrence, Emma Roberts and Zoë Kravitz). Here, Tonchi talks about the new W and the burden of expectation. — Nick Axelrod

WWD: Can you tell me about the September cover?
Stefano Tonchi: We are going to run with the three covers — it’s a triple gatefold, which they’d never done. And then it is a new logo, as much as it looks like the old one, in a new typeface [called] Benton. It’s kind of skinny, it’s very vertical. It’s very elegant and it is italic, with a sense of movement, evolution. Then there is a tag line — that was never a part of W — which I think defines what W stands for. It’s not just women’s fashion, but the world of style and, more exactly, our five Ws: the who, the what, the where, the when and the why in the world of style. And with the main headline, “Great Expectations,” I wanted to have some self-irony, because there are so many expectations about what this W will be, so it refers to these eight great new girls, but also to the pressure that we feel to satisfy the expectations that people have for the magazine. And we put “By Lynn Hirschberg” because I want to put writers’ names on the cover. The content — the writers — are going to have a strong place in the magazine.

WWD: Have you made W less fashion obsessed?
S.T.: From the cover, I would say probably yes. First of all, it’s the September issue, which is the big fashion issue, so we have a lot of fashion and we will keep having a lot of fashion in the magazine, but with many, many stories around the fashion portfolios. Last year, when I looked at the last September issue — and it’s more or less the same issue in terms of pages, we are about 60 pages more this year — there are really 106 pages of fashion pictures. This year, we still have probably more than 60 pages of fashion, but we also have more than 40 pages of stories that are fashionable, but not just pictures of clothes.

WWD: Do you feel like the magazine is more general interest?
S.T.: It’s more about fashion in the context of contemporary culture, and that’s really the definition that I like to use. At the end, everything we look at is in the key of style, and that’s why I defined the content of the magazine as the who, the what, the where, the when, the why in the world of style.

WWD: What other specific changes have you made?
S.T.: Starting from the new logo and typefaces throughout the magazine, and we also really completely changed the structure of the front of the book, which is now organized in departments. The departments are the five Ws, and they are all very rich in information from different areas — the world of entertainment, music, youth culture and contemporary art and design and architecture — all things that are part of what is fashionable today. The ‘whos’ are the people that you want to know about this month. We have a story on [Kazuyo] Sejima, the architect who is the director of the Venice Architecture Biennale, which opens on the 26th of August. In the section “when,” we have all the best things to do in September. It’s five pages, and you go from a show in Minneapolis, a release of a new record by Ryuichi Sakamoto to a fair about food, an exhibition of the designer Marc Newson or another exhibition of John Pawson to a book about Island Records to an exhibition about Yul Brynner….

WWD: What have you kept from the old W?
S.T.: The great photographers and the great photography that this magazine has been known for. There are two Mert [Alas] and Marcus [Piggott] portfolios, there is a Craig McDean portfolio….

WWD: When the old guard left W, some people wondered if the magazine’s biggest photographers, such as Bruce Weber or Paolo Roversi, would leave, too.
S.T.: Paolo Roversi had a fantastic story in the August issue and wants to work for the magazine, so he will again. Steven Klein — we have not had a project for him right now, but we may have a good project for him. Juergen Teller — we’re going to work with him again in November, I think. But in this issue, we have some of the photographers who have been identified with W recently, and at the same time we brought in some new people like Tim Walker.

WWD: Are there any other new photographers that you’re going to work with?
S.T.: In October, we have another Tim Walker story. We are doing something with Platon. Inez and Vinoodh shot this cover and they are going to shoot the next cover. They had a relationship with the old W, but I look forward to working more with them.

WWD: When will the makeover be complete?
S.T.: Probably in six or eight months the readers and the audience will have a more clear idea of the magazine and where it’s going. We also have to see how people react to it, how the media community reacts, hearing from the readers, how the newsstand does, how the advertising community judges the magazine and how even Condé Nast, as a company, reacts to the magazine. So far, what they saw, they were incredibly happy with it.

LOCAL COLOR: British Glamour has teamed with Converse to produce a series of British city and regional guides for its September issue, which comes out Thursday. The issue has eight covers, all of them featuring Katy Perry dressed in a T-shirt that bears the name of the city or region. The 16-page sections — for London, Birmingham, Bristol, Manchester, Northern Ireland, Scotland, Wales, and Newcastle — offer shopping and eating tips as well as snaps of stylish locals and profiles of emerging talent. Editor Jo Elvin said the magazine was able to tap into Converse’s “unofficial youth database” in each region, and also put a call out to glamour.com’s users for their own recommendations. Elvin said the prerelease enthusiasm is such that, “one reader even Twittered to say she couldn’t wait to see the south Staffordshire issue.” (For non-British readers, that’s like tweeting to ask about the special issue on northern Oklahoma.)

There also is a series of merchandise tie-ins, including the chance to win a pair of Converse sneakers every day for a month, and T-shirts and Converses signed by Perry. Glamour.com also will be running related content, including video blogs from local talent, and behind-the-scenes footage from the cover shoot with Perry.

ALEXANDER WANG GOES MULTIMEDIA: Alexander Wang tapped friend and rock ’n’ roll spawn Zoë Kravitz for the ad campaign for his T fall collection. A sultry and kohl-eyed Kravitz appears in a postering campaign, with model Max Motta, which will hit the streets Thursday. As with last season, National Promotions & Advertising will be plastering the images around New York, this time targeting locations in SoHo and the East and West Villages. But the real news chez Wang is on the ready-to-wear front. On Wednesday around noon, the designer will unveil his first-ever women’s campaign video in collaboration with photographer Craig McDean, stylist Karl Templer and creative director Fabien Baron. “This is our way to sum up the season in a different light other than the show,” said Wang, adding the clip will premiere not only on his Web site but also a select number of fashion sites, including those for WWD, French Vogue, Love and Style.com. “I wanted to have global representation. Everyone can showcase it in their own way and have their own reaction,” said Wang.

The short video features model Abbey Lee (“dancing and moving along”) and works the subtle Wall Street vibe that inspired Wang’s fall collection. “It’s abstracted,” explained Wang, who, no, doesn’t make a Hitchcockian cameo. “Abbey’s not walking down Wall Street past buildings, but there’s wind and newspapers flying all over the place. It’s very moody and seductive — like looking at a perfume ad where you feel for the girl a lot more. Rather than saying, ‘Here’s the product,’ this is more about expressing ourselves.” Speaking of fragrances, is there a L’eau du Wang on the horizon? “I’m thinking and definitely putting together ideas,” he answered coyly. “TBC, to be confirmed.”    — Venessa Lau